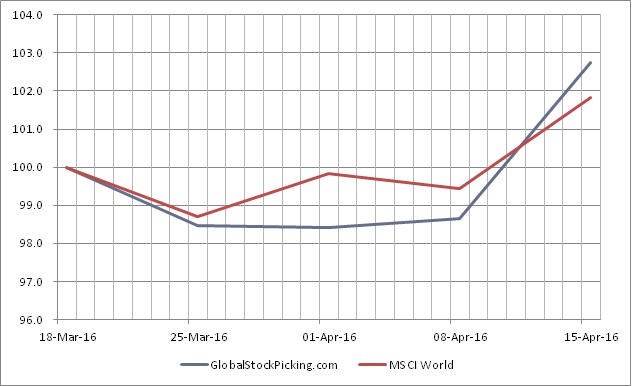 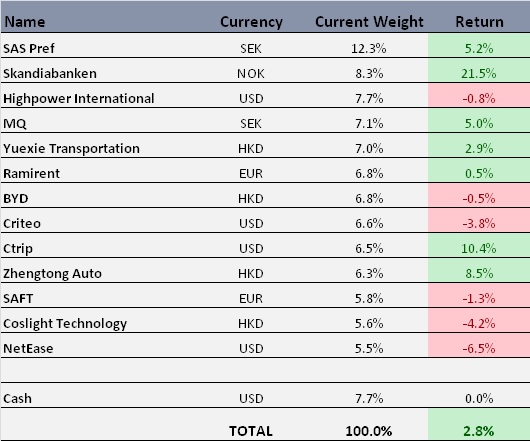 The portfolio was off to a somewhat weak start and recovered everything in the last week with a 4.1% increase, ending the period up +2.8%, ahead of the benchmark MSCI World with 1.0%. Much of this can be attributed to a China rally during the last week, which the portfolio has a very large exposure to.

Under the surface of a diversified portfolio, there is always something happening. Summarized below is news and announcements that has particularly affected the portfolio.

The majority shareholder in Skandiabanken has been the Life insurance company Skandia. Last week it was announced that they sell their stake in the company to Altor Fund IV at 46 NOK per share (+10% premium to latest close). Altor is a Private Equity company based in the Nordics. The market took this as a big positive and the stock traded up about +15% over the coming days. I think this a real vote of confidence and I believe Altor sees a lot of potential to steer this company to further growth. Very happy with a quick +20% return, but even more happy that the company has got a strong owner for the long term.

I was about to post a separate post about this company, which I still might do. The quarterly results were presented, which were not taken well by the market and the stock was down -20% on the day. The reason for the significant drop was mainly disappointment around the progress of the takeover offer from a Chinese company. This takeover actually values the company at a significant premium to current valuations and that was my main case for buying into the company. Listening to the latest conference call they explain that it’s complicated legal work for a US listed company to handle a offer from a Chinese company. So if this takeover does not go through the management indicated the need for a rights issue. I had two other reasons two buy the company, they were that previous conference calls had indicated a co-operation with a large drone producer and starting to deliver batteries to bus producers. Then when things started to look pretty dark, the company announced that they started shipment of lithium batteries to DJI, which is the world’s largest producer of drones (as a side note there are rumors DJI will be listed soon). The stock then recovered to about the level before the quarterly results. I have decided to lower my weight in this company due to the overhang of a rights issue.

Announced a lot of small first orders of Electric buses lately, the most eye catching being the Double Decker in London 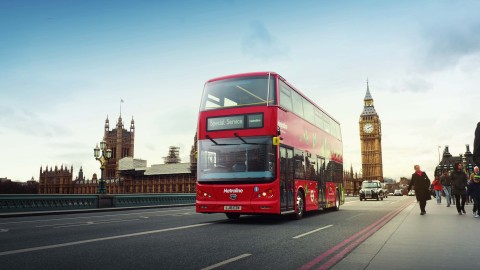 “The BYD pure-electric, Double Decker bus is 33 feet long, can hold up to 81 passengers and drives over 24 hours up to 190 miles on a single electric charge.”

A rumour floated in the news about a cut in subsidies of electric buses, this would be bad for all the battery companies I invested with, I might cut my exposure somewhat over the comings months. The statement was the following:

“Incentives for electric buses will be cut by an average of 32 percent, with funding for the largest models slashed by as much as 49.5 percent, according to the people, who asked not to be identified as the deliberations are private. Electric passenger vehicles costing more than 350,000 yuan ($53,800) won’t be eligible for government subsidies under the proposal. The plan is still being reviewed by various ministries and has to be approved by the State Council, or cabinet, the people said.”