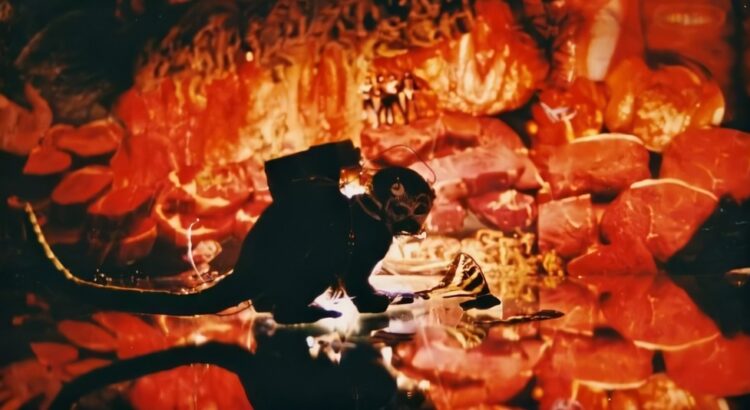 Back in May-June after my last blog post my life and portfolio was in bloom, I had my best outperformance since the blog started and I was back good physical shape. That did unfortunately not last and things went quite wrong from there on. I had struggled with my health for the past year and early this summer it got worse than ever when a injured myself quite badly. I’m much better now but going through something like this really drain you. Currently going through the slow process of trying to build up strength again. Due to these unfortunate health issues I haven’t had the mental capacity to post anything or research as much as I used to. But now after exactly 4 months of inactivity I’m back blogging. I got a bit of a writers block starting off this post, I try to just come as you are. Nevermind my health issues, let’s put focus back on what happened this summer and especially China.

Having a strongly China tilted portfolio has really been bad beta exposure these past months, the spread between developed markets and Hong Kong is really remarkable. Just like health issues which sooner or later emerge, I knew the day would come when China would have to clean up its imbalances and go through a readjustment/bust. I read plenty of books on the topic and spent considerable time trying to understand the dynamics of for example the Chinese housing market. Being somewhat mentally prepared and thinking through the downside helps, but it still hurts when it happens. My portfolio has taken it on the chin lately, but perhaps not as bad as one would expect. I had such a tremendous run in some of my holdings previously, that gave me plenty of cushion. Also I have had minimal exposure to all the sectors that have been worst hit. As of last Friday my portfolio is now in-line with MSCI World (20% vs 18%) and massively ahead of Hang Seng (-8%) YTD. 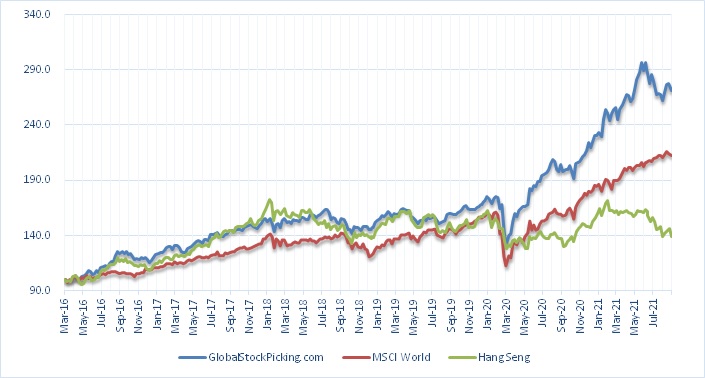 Although I haven’t posted I have stayed somewhat active in the market. I had to, for example Modern Dental continued to double yet again from where I started to reduce my position. I was very happy to unload another portion of shares at 9.4 HKD, keeping half of my initial position for the long term. This stock alone saved a lot of my bacon in terms of performance this year.

I have been gradually increasing my position size in Greatview Aseptic, which I think is underappreciated and undervalued here. Yes the semi-annual was a bit weak in terms of revenue falling down to the bottom line, but revenue grew nicely YoY. Given the increased raw materials prices and the extremely stretched transportation market it was no surprise to me that profit wise it would be a somewhat softer half year. This is still a growth company (growing revenue some 9% YoY in the past 4 years) with a 8-9% dividend yield, priced as a zero growth company. Doesn’t make any sense, so I will continue to back up the truck and load up more. I added shares at 3.74 and 3.45 HKD, which apparently was too early as its now trading below 3 HKD.

In the same manner Vinda has come down in valuation, I added some shares at 23 HKD, again not the best timing but quite happy to add shares at this level. Both of these companies have similar characteristics: totally unsexy business, factories producing daily necessities, founder led and both taking market share in a market with a tailwind. This means the can post high single digit growth rates, which is nothing to scoff at in the long run.

Did some profit taking in both to fund the additions in above mentioned stocks, here I sold at good levels, 9.76 and 7 HKD per share. The selling has not really anything to do with not believing in these companies (they are even after selling my largest positions), just that I want to balance the portfolio and re-allocate to for example Greatview which I see as having better return potential from this point.

When I added this company to my portfolio I wrote this post, with the question mark a dream Investment? I wouldn’t say it turned into a nightmare, but not far from it. I bought at 4.11 HKD and sold out 3 years later at 2.88 HKD, throw in a couple of dividends of some total 40 cents or so and its still a handsome loss, during a period my portfolio almost doubled. Incredibly enough most of the loss comes from the EV/EBITDA multiple contracting from 5 to 4, cheap got even cheaper. It’s ridiculous to sell but also ridiculous to allocate capital to something where shareholder value never seems to unlock. It would be painful to see the company announcing a special div or something like that now and the stock doubles, which would be reasonable. Such is life in value investing land, some stocks are just to deep value traps and this one I throw in the towel on. I could write tons more about this company, but choose to cut it short since its no longer in the portfolio.

I have been flip flopping a bit in Irisity. I reduced my position in July thinking the odds for a continued rally seemed weak. Then they announced a merger with an Israeli company in the same sector, basically removing a one of the largest competitors (not that any of these players are large) and maybe more importantly gained a decent sales force. I think building some scale into this company is really needed and I saw this move as worthwhile to put on a position again, which I did a few SEK higher than where I sold 58 vs 61 SEK per share.

Oh boy this has become a tricky one. The share price has taken a proper tumble dropping more than 50% from ATH. The market seems to focus more on the short term pain of Covid and Casino closure than the possible long term gains. Here you can see the sentiment difference between for example the US cruise liners like Royal Caribbean which has fully recovered from its Covid drop, although cruise sales worldwide has not fully returned. In this cases the market was quick to take the long term view but in Nagacorp’s case the market is either short sighted or changed its view significantly on future income potential. My interpretation of what the market thinks, its a bit of both. Short term scared that it could still take years for Cambodia and Asian markets to resume travel, combined with what has been happening in China with new rules for Casino Junkets, which makes it likely VIP business will not come back as before. This double uncertainty has just killed the stock. On top of that there is also some overhang fears of how the funding of Naga3.

I decided to add to Nagacorp (again too early) in July at 6.98 HKD per share. My reasoning being that Cambodia is a friend of China, which can be seen by high vaccination rates they got compared to the rest of south east Asia. My guess is that Cambodia will be one of the first countries which will open some type of travel towards China. But say I’m wrong and travel does not resume say in another 2 years, then the situation is tricky. Naga3 will be delayed and probably cost more to finalize, the down period will then be so long that I think share dilution etc will be a fact. Nagacorp will turn into a disaster investment with permanent loss vs current limbo situation. In my view all of South East Asia can not afford to be closed for another 2 years, yes it would crush Naga as an investment case but it would crush the economies of these countries more. Still I’m humble to the possibility of being wrong and I don’t want to size my bet too big, I’m not going to add further (7% position) until I see signs of actual improvement. In regards to VIP business, yet to see where this lands, I have a small hope that junkets will be more controlled in Macau but will find ways to continue to operate in Cambodia, but my base case is that VIP does only come back to 60-70% of previous levels, which is still good. In other words in my view risk reward looks good, but outcomes could be extreme both on up and downside.

A third Polish holding enters the Portfolio, the Warsaw stock exchange itself, a separate post will come soon!

A few words on China specifically as well, given all the things that happened perhaps I should dedicate a separate post to it. Since I started this blog I always had mixed feelings about my tilt towards HK listed companies and China exposure. First time I got bearish on the blog was 2017: Rotate away from China. Already back then I spelled out my worries of China property and sold out of my holding Ping An. Ping An has lately been one of the largest indirect losers of this Evergrande mess. Trade War feels like a really old topic by now, but its very much alive and kicking. The whole de-globalisation feels like a long term new theme one could do investment after

It’s clear to my by now that China has decided to decrease the wealth gap created in the past 20 years. There has been some obvious losers, like education companies but a lot of companies have been hammered for various reasons. In my view even the Evergrande mess is part of this same theme (at least partly). What is less talked about is that there are also some winners in equalization. Just like in the US with stimulus checks which created a huge buying freenzy. If the poor in China got less poor thanks to wealth redistribution, perhaps the customer base of Vinda’s Tempo tissues grows from a few hundred million to half a billion? If a dedicate another posts to thoughts on China I would like to explore this are more. As always happy to hear you input, who do you think are the winners if China wealth gets more equally distributed?

It’s very good to be back posting, hope you got the tribute hints, man 30 years already!

13 thoughts on “When things go wrong”