The third quarter of the year has passed and the bull market is still roaring pretty strong. My guess a few years ago would have been that we should have seen a larger setback by now. On this particular point I feel pretty humbled by being wrong for so long. Performance wise I do not feel as humble. I have done quite a number of things wrong during this year, mainly selling stocks too early. But in general I did more things right than wrong and that’s what counts. Let’s go through the performance and some high- and lowlights. 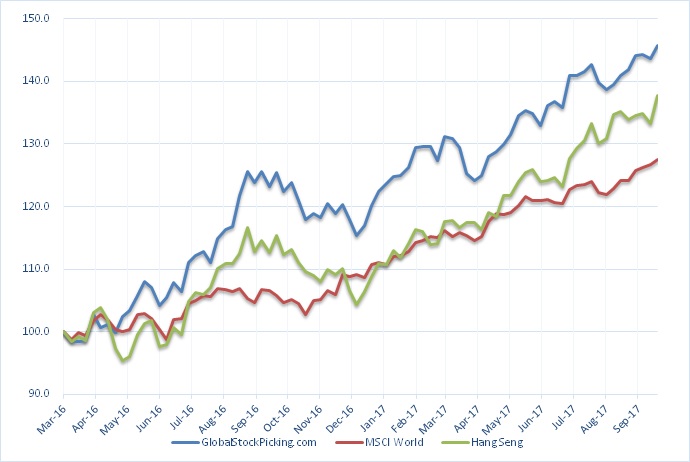 Year to date the Global Stock Picking portfolio is up +24.5%, that compares favorably to MSCI World (Total Return) which is up +17.4%, but lagging Hang Seng (Total Return) which is up an incredible +29.3%. Looking at risk adjusted returns, I’m not faring that well though. Although I have run a large cash position (which lowers volatility) the volatility YTD is at 10.5%, compared to MSCI World at 5.5% and Hang Seng at 11%. So risk adjusted I come out with the worst Sharpe ratio of 2.33 vs 2.66 for Hang Seng and 3.17 for MSCI World. I guess that also says something about the state of things in the markets when a Global Index portfolio is returning a Sharpe >3.

I probably sound like a broken record soon, but this to me is a very late stage bull market and one should plan accordingly. I did make an attempt to discuss the topic recently (Where to hide – a factor approach).

That I have added Hang Seng as a comparison might be somewhat misleading, since my intention is to run a Global portfolio. The reason why I added Hang Seng was due to my heavy China tilt when I started the blog. I would argue that is not a constant tilt that I will have over time. It was an allocation call I made at the time. It is a call I’m obviously happy about, since it has given me free Beta out-performance against MSCI World, which is my true benchmark.

Lately I worry about the Chinese economy and the valuations has got more stretched also for Chinese stocks. As you know from previous posts I actively rotated away from China. Currently my portfolio has 16.5% of its cash invested in companies with most of its earnings from China (Coslight, XTEP and NetEase). I will keep the Hang Seng comparison for sometime, but I might remove it at some point.

Buying Gilead became a very well timed investment. The market really liked the new product line their are buying themselves into through their acquisition of Kite Pharma. I honestly don’t have the knowledge to know if this will actually be so fruitful as the market seems to think. My impression is that (the market thinks) Gilead has a strong acquisition track record.

Nagacorp which we discussed extensively in the comments and I choose to double up on has come back to something closer to fair value. The company continues to execute well on attracting more VIP players and the Naga2 complex is about to open in full scale. Next Chinese New Year will be very very interesting, I’m optimistic about further share appreciation. As long as the majority holder does not decide to do something stupid (again).

LG Chem which is my long long term holding for the EV-theme (being a leader in battery technology) has performed very well lately (although not as well as the pure-play Samsung SDI). Unfortunately the battery part of LG Chem is still fairly small. I expect it to grow substantially over the coming 5 years.

I made a bet that XTEP, the Chinese shoe company was lagging it’s competitors who have all had great runs in the stock market and would do some catch-up after it’s semi-annual was released. It turned out being the opposite and I doubled up before the stock collapsed. I feel a bit beaten up, picking the only Chinese shoe company that is down performance wise. Still haven’t given up though, although less about my position than before.

In my move to rotate away from China (Time to rotate away from China) I have sold a number of holdings lately. Two which I sold after very strong returns were YY and BYD. It has been a bit hard to see the shares continue to surge another 30-40% after I sold, but such is life. As I wrote at the time for YY, I got scared of the Chinese Gov clampdown on streaming services, but these things often go away and so it did. And the upside I saw very shortly after came true.

Catena Media which I just bought into also had a negative event right after I bought. The CEO was fired with immediate effect. This gives me some worry that something might surface in the Q3 report. I have considering to reduce my initially fairly ballsy position. The only positive keeping me from doing it is the interim CEO which I have very high hopes about.

I bought two bricks and mortar stocks, XXL and Tokmanni, I reversed my decision with a smaller loss for XXL and kept Tokmanni. So far I should have done the opposite, since XXL has rebounded nicely whereas Tokmanni is treading water. 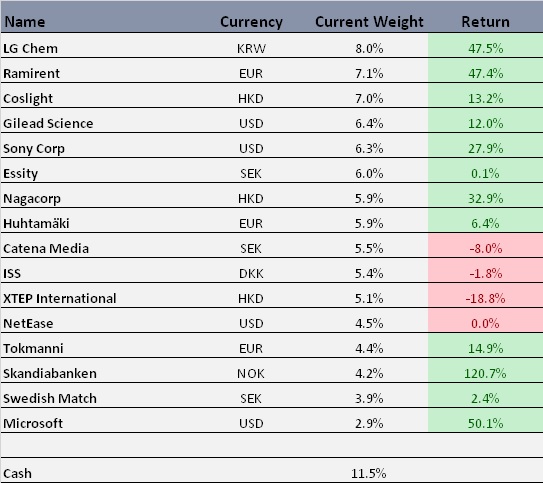