I introduced my three buckets of investing about 2 years ago it was a major step forward for refining my investment strategy. I have stuck to it since, focusing mainly on my long term holdings and from time to time jump into Opportunistic or Speculative holdings. Overall the Opportunistic investments have done very well, whereas the Speculative ones have not added any value. I will now make another stab at introducing a number of speculative holdings to the portfolio. 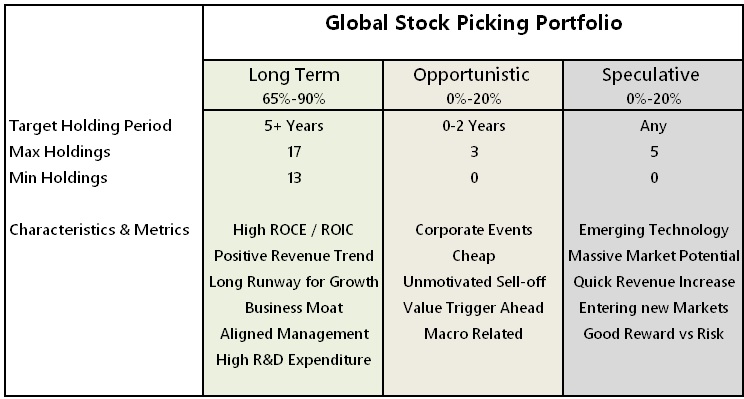 This goes for all my investments, do your own due diligence, do not see this as investment advice. But for these investments I want to be extra clear, these are high risk illiquid companies. As of Friday close I take the following positions

This was something I previously held as a sizable speculative position. My patients ended when the company didn’t deliver and I sold. Now G4S has signed an intention to roll out their product in multiple markets. Although no larger orders have been made, this is the breakthrough the company has been looking for. If things progress as Irisity hopes over the coming 5 years, this is stock is a 10 bagger.

See my previous post where I commented on Irisity: Link

Gold is almost touching on 2000 USD per ounce. This is a ugly duckling gold producer with insanely high production costs which is attempting a bit of a “turn around”. That is exactly what I’m looking for. The stock is a cheap call option if gold price continues higher or stays around these levels, as long as they don’t mess up production further. Bonus upside if they actually manage a turn around in their production. What I do like is the founder and large shareholder Rob McEwen who the company is named after. Most mining companies are filled with crooks, with the poor performance of McEwen’s operations I’m sure there a lot of rotten apples in it’s organisation as well. But I do believe my and McEwen’s interest are aligned.

If golds goes up another 20% from here this stock should at lest double, if not triple given it’s leverage to the gold price.

This is a company with a long history, recently reviewed by new management and with a new massive tailwind from Corona virus. They enable a touch technology which is used in several automotive applications. The big upside though is to expand into other areas like elevators, where the technology can be used in combination with holographic technology.

With Match Group stock flying high I do think this dating network competitor is also a very cheap competitor. As with most social platforms network effects are important in one sense, since more users means more dating matches. But many users also get bored with the same old platforms and often try something else, which might be more niche and suit them better.

For example Spark has a page called SilverSingles for 50+ dating. They also acquired Zoosk about a year ago which has a larger userbase. The stock has bottomed after a significant draw-down and momentum looks much better now to enter into a position.

5 thoughts on “Speculation is back”