Year to date the portfolio is up +3.5%, compared to MSCI World at +0.8%, both including dividends (so called total return). My portfolio has in the past generated it returns with significantly higher volatility than MSCI World. You can almost see it in the graph below how stable the upward trend was in MSCI World. Interestingly enough now this year, when markets have turned more volatile, my portfolio volatility is slightly lower than MSCI World, at 15.2% vs 15.8%. Downside volatility is what counts and I think this is one proof that I managed well to create a defensive portfolio, which has been one of my aims, many other aims were discussed in my previous post earlier today. 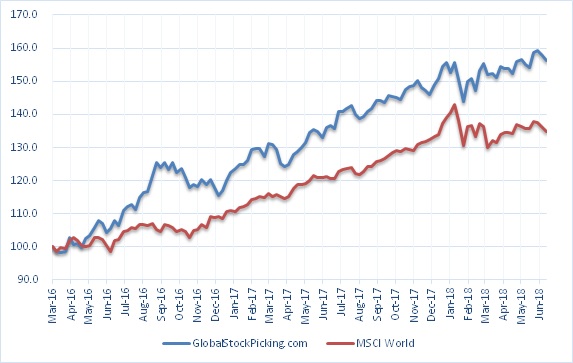 Total return of holdings since investment 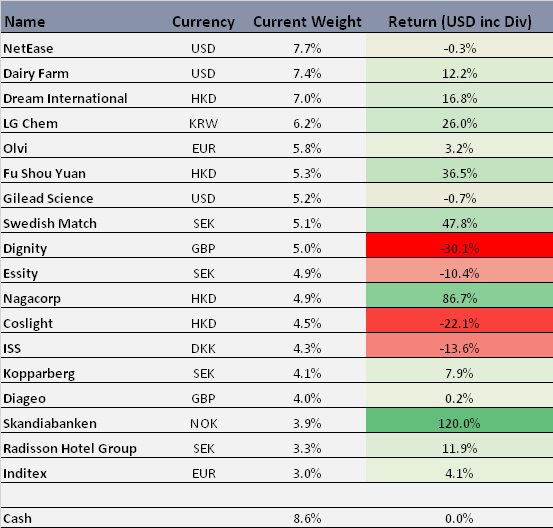 Some comments on the largest gainers and detractors during this year.

The Swedish tobacco company has performed very strongly compared to its sector colleagues. Then again Swedish Match is a very different company selling smokeless tobacco products. For the interested reader this is a good primer on snus: New York Times on Snus. Except good results, one reasons for the strong share price performance is spelled ZYN. Which is a tobacco free nicotine pouch, which recently has become a big hit in the US. Swedish Match has recognized this and is spending 60 MUSD+ in increasing capacity over the coming to years of ZYN. Valuation short term is a bit stretched, if I had a larger position from the beginning, now would be the time to scale down the position somewhat, unfortunately I started of with a very small position. I’m willing to continue to hold 5% of my portfolio in this excellent company.

One of my two funeral company investments, they truly went in opposite directions. In a very poor market environment this stock has been on a tear since I invested. The price momentum strength in this stock is almost a bit scary considering how weak the Chinese markets been lately. At these multiples/levels I have to say I’m close to scaling off a bit of this position. That will depend on if I find somewhere better to allocate my money. Here I also want to mention my fellow blogger who wrote an excellent analysis on the company: C for Compounding on Fu Shou Yuan.

Another new investment that also just kept on its upward momentum. Since I did my analysis on the company I have understood a bit better what kind of plastic toys is driving this fast growth. The understanding came from a deeper analysis of newly US listed Funko. Basically a lot of the Funko’s toys called Pop! are collectible items. Just search for it on Youtube and you will find a lot of people like this guy: Funko Pop collector. The funniest one I found was a contract written up between husband and wife: Funko Pop contract – Limiting spending. This makes the picture a bit more clear how Funko in just a few years has become such a big player in the plastic toys industry. I see this as one of my strongest investment cases, therefor it also carries a large weight in the portfolio.

My second funeral stock has not done nearly as well the first one. I decided to double up in this stock after the fall of 50% in one day. That seemed like a very good move for some time. Actually I was close to making up the whole loss about a month ago, then the stock was hit again. This time it was due to UK’s CMA (Competition and Markets Authority) who launched a review of the countries funeral sector, to make sure “people are not getting a bad deal”. It seems after this most investors have given up hope on the stock. I haven’t really given up yet, since the reason for the rebound after me doubling up was that actual results came out much better than anticipated. We are still looking at a totally non-cyclical company, with a estimated P/E of about 11-12 and a dividend yield of 2.4%. As mention in previous posts, the worry is the debt load in case profit margins fall significantly further. I’m stubbornly keeping this one.

After being one the portfolios true outperforms and a holding I had for a long time, LG Chem has given back much of that out-performance over the last few months. The stock is fairly volatile and living its own life, but the downturn is likely due to the oil price. This volatility from the Chemicals division is something I will have to live with, since I didn’t invest in more pure play like Samsung SDI. The reason why I’m owning the company is not due to the Chemicals division, but because the company is truly in the forefront of EV battery production. Now we are 1-2 years out for the start of really widespread EV sales from all the big car companies. My plan is to ride this whole wave and hopefully hold this company for another 10 years.

Similarly my idea with Coslight was that it could become a Chinese large player in the EV battery space. I’m less sure now than I was 3 years ago that actually will be the case. Not because Coslight is not going to try, but because the company does not really have the financial muscles to build up huge modern EV production plants. Like for example the newly listed CATL can do, or BYD for that matter. Coslight has proven itself as one of the largest producers of laptop batteries, so they have the know-how to make batteries cost efficiently, but I’m starting to feel less sure if that is enough. They sold of a portion of one of their factories to reduce debt and free up capital to invest further into EVs. Overall it was a good move for us that wanted the company to move towards EV battery production, but the market has not really received this news well. A tricky holding I followed for a long time, before I had a lot of conviction. I think the reasons why I’m not giving up on this company, is that they have truly hidden value within the firm. Strangely enough (due to the majority holders son) the other leg of the company is video/mobile games producer. The best case would be if they decided to list the games entity separately. The games developer might be valued at perhaps a third of whole Coslight’s value, given the multiples on games developers these days.

As you can see from my discussions above, some holdings I’m happy with, others more worrying. Given this, I still need to keep up the hunt for at least 2-3 new investments. I will also consider if I should increase the weights in some of my current holdings, to not keep cash levels too high. In general that has been a problem in the past and really big performance detractor, since I calculate 0% return on cash. 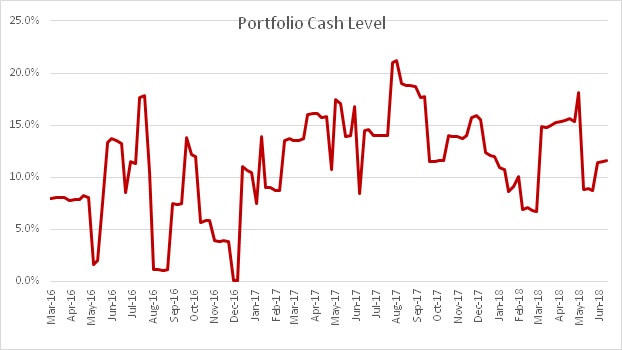