Having a global portfolio the earnings season is less of a season and more of a continuous thing over the year. Most European companies are long done with the annual reports, whereas many Chinese companies are still holding it off for another week or two. In general I’m not very happy with the result updates from my holdings, few positive surprised and several fairly negative ones. Let’s look at some of the companies and the figures released..

About a month ago Rottneros reported for the first time, since I made my initial investment (Rottneros – the SEK winner). The report was a clear disappointment and the stock traded down -7% on the day. Since then the stock price has recovered and is hovering around my average buying price. So what was the reason for the disappointing figures? The company blames a longer than expected time to start up the Vallvik plant (which has it’s scheduled maintenance stop each autumn). And this obviously had an effect, but it’s still somewhat surprising the effect became so big. the NBSK Pulp price in SEK was 5% higher this Q4 compared to Q4 2015 and even so the result was -7 MSEK compared to +1 MSEK in 2015.

The conclusion back in October when I wrote my analysis, was that margins look favorable as long as the USD stays at strong levels vs SEK and Pulp prices at least stays steady. These two factors have stayed true. The USD (with some volatility) has stayed at same level as when the analysis was written and Pulp NBSK prices have even strengthened somewhat. Some fairly major investments have also been made to upgrade the plant, this should start to feed through in terms of production volumes and bottom line. I expect a very strong Q1 result in May this year, in range of 0.45 SEK per share. Which should put the company on track of delivering a 2017 EPS of around 1 SEK. Meaning that Rottneros is currently trading at forward P/E below 8. This would warrant the share price increase I have been looking for to around 10 SEK. If the next earnings report is again a disappointment (below 0.4 EPS), I will look at selling my shares, because then they are doing something wrong compared to what they delivered a few years ago.

The market was also pretty brutal on Nagacorp’s reporting day, trading down the share as much as -9% . The stock has since recovered, in my view mostly because the Hang Seng and Macau casino companies has traded up significantly. But the stock has felt very weak and from compared to the market Nagacorp is a clear laggard, for example Galaxy (27 HK) is up +18% since after Nagacorp’s disappointing report. So what was the problem with the report? Honestly not that much, figures came in somewhat weak, but nothing major. But this was the first time the dilution from the convertible bonds became obvious to investors. Henceforth the dividend will be shared with convertible owners bonds, which are entitled to the same dividend as the ordinary shares. 2017 will be somewhat of a wait and see year, since Naga2 will be launching in the second half of the year. If this stock is going to have any major upside, it will be reliant on a successful launch of Naga2. Basically the company plans to expand it’s VIP segment by moving much of the mass market players to Naga2 and refurbish the old complex to better satisfy demanding VIP players, about half of current revenue is from VIP. As long as we don’t see any very hurtful share dilution for the Russia project, I’m confident that we at these levels, have low downside (10-20%) while the upside is towards the 100% range over the coming 3-4 years.

Solid report, with significant increase in NII margins, home lending is growing very nicely. I’m a bit it worried that deposit volumes are standing still, maybe not right now, but at some point this will hinder further growth. Somewhat mixed feelings on this holding, long-term I think it is a very strong case in the bank sector. But short-term the stock feels somewhat overbought, I was very close to pushing the sell button around 77 NOK and now it has traded down to 71.50 NOK. In general my feeling of owning banks is a bit like picking pennies in front of a steam-roller, given that it will be very tough times day the housing market starts to fall (which I think is due, either due to normalized rates or economic downturn). Having said that, very long term a digital efficient bank that handles mortgages definitely feels like the future, and Skandiabanken’s current customers do seem to be agreeing (being the most satisfied banking customers).

This report came out after Friday close and on Monday we will see the markets judgement of the report. In the meantime I will give mine. The figures were disappointing, looking at head-line figures it looks awful and that is due to a one-time write off of the Kids store segment (impairment of trade receivables of 222m RMB). A larger number of stores have been closed during 2016, from 600 a year ago to 250 left today. I have not taken that much note of this kids segment, but looking back at sell side analyst reports, this seems to have been known in the investor community. With Footwear sales coming in very strong for the first half of 2016, the expectations on my side were quite high for H2. This did not impress, and the reason must be the 222m write of in the kids segment. The apparel part which made the stock trade down significantly over the last year, as I expected recovered nicely and is back to it’s long term trend of hovering around sales of 1bn RMB per half year. Below is an overview: 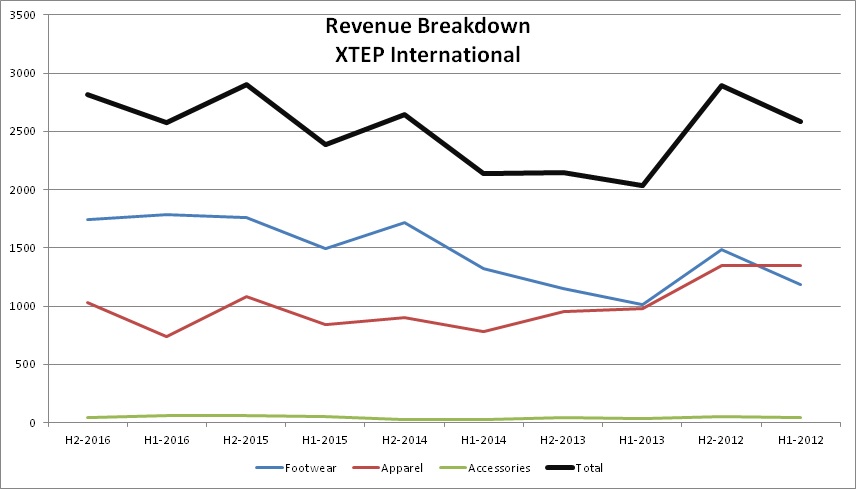 In a sector which such high growth as sportswear, XTEP is lagging, but I don’t see reason to sell just yet, the stock is so cheap. The biggest worry for me is the discussions we had in the comment section, where one of the readers made me aware of how huge cash pile the company is sitting on (~3bn HKD – MCAP 8bn HKD).  I also had not reflected on how constant that cash pile has been since it’s IPO, this I think is my biggest worry. Why do they need so much cash? The comments raised possibility for fraud, I’m not overly worried about that, but at least it’s showing a very in-efficient use of the companies capital. From a pure value perspective it is of-course amazing buying a company with MCAP of 8bn HKD, with net cash of 3bn HKD cash and generating 0.6bn HKD of Net Income per year.

Last but not least, the most important holding in my portfolio (since it has the largest weight) has still not reported. The report is due on Friday 31st of March. Like XTEP the reporting is semi-annual. The last report was what got the stock moving big-time and rightfully so, since the company delivered 0.35 HKD half-year EPS on a stock trading below 4 HKD. Since then, for not really any major reasons the stock has been on a roller-coaster ride, moving between 6.9 and 4.1 HKD (I added to the stock on this weakness). My expectations on this report is high, for a few reasons. Some of the major companies Coslight deliveries batteries to, HP for laptops and BAIC for EVs have both been doing very well in their respective markets. HP is holding a very strong position in the laptop market and has even managed to gain market share (although I do not have data on market share on the models that Coslight provide batteries for). I would also suspect that Coslight has been given a larger allocation from HP, due to other battery-suppliers to HP have created problems with faulty batteries and very large recalls for HP.

BAIC as I mentioned before has been of the top sellers of EVs in China, especially over the last 6 months. Again is not totally clear how much of the total EV volume that has Coslight batteries, since BAIC has several battery suppliers, but it does look promising. All in all this means that it seems reasonable Coslight will be selling close to full capacity of it’s factories (which was also the companies guidance).

In the counter-balance we have the margin pressure in terms of lower battery prices world-wide and also as several sell side firms have been warning a potential oversupply situation in the battery market especially for 2017-2018. So there is a risk that Revenue comes in very strong, but that bottom line has suffered and that EPS comes in weak. Looking at history there has also been clear seasonality in terms of EPS. Average EPS for H1 is 15.5 cents since 2007, whereas EPS for H2 is 3 cents. But I do believe the market is factoring in a lot of these concerns already, the last time the company delivered a semi-annual EPS in the 35 cent range was H1 2009, in the wake of the crisis – the stock traded at 7 HKD pre-report and went to 16 HKD. When the company followed that up with a H2 result of 21 cents it had in the interim rebounded to 10 HKD and rebounded up to 14 HKD. So if Coslight just delivers something modestly good, say in the range of 15 cents EPS, this gives us full year EPS of 50 cents and I do believe we can see Coslight going quickly to 8-9 HKD.

3 thoughts on “Earnings season and other thoughts”