This is a follow-up on my previous post where I initiated a position in YY.com. I have already directed you (Here is the link again) to an excellent article on the whole live-streaming phenomena in China. As I stated before, I believe in this going forward both as a phenomena and YY’s revenue model of virtual gifts. I think this works especially well in China where the people aged 15-35 spend more and more of their time in front of computers/video-games/mobile phones. A lot of people are getting seriously dysfunctional in normal social interaction and feel loneliness. The need to interact is still there and these platforms become the ultimate way to relieve that frustration. On top of that we have a lot of old people, who also feel lonely, especially in China where the one child policy has created a lot of elderly which don’t have a big group of youngsters to interact with. In the case of YY, it’s also a city tier story, the people living in Tier 3 cities are very curious of the lives of people living in Tier 1 cities. Digging in to the figures the best future prospects for revenue growth comes from online-dating and educational platforms. But let’s not get ahead of ourselves, let’s move over to the company Intro.

The founder David Li has a long history in China Internet Tech. In 2003 David worked for Sohu as the IT head editor, later he join NetEase. In 2005 David start his own business duowan.com, the homepage quickly became China’s largest game information website, with over 100 million page views per day. Mr. Lei Jun, an angel investor in YY is was the CEO of Kingsoft Corporation later he founded XIAOMI technology-a smart phone company, Lei Jun is considered among China’s 10 wealthiest. David Li and Lei Jun owns both about 17.5% of the company each. In July 2008, the company launched the YY Client, a PC-based software that allows users to create individual channels for any live social gatherings. YY Client quickly gained a vast user base and emerged as one of the most popular voice communication tools. In 2010 a mobile app Mobile YY was introduced and in 2012 a web version. YY was listed on the NASDAQ in November 2012.

It should also be mentioned that David Li and Lei Jun quite recently tried to take the company private: “YY received a non-binding “going private” proposal from its Chairman Mr. Jun Lei and its CEO Mr. David Xueling Li, proposing to acquire all of the outstanding shares of YY for US$68.50 in cash per American depository share (ADS).” 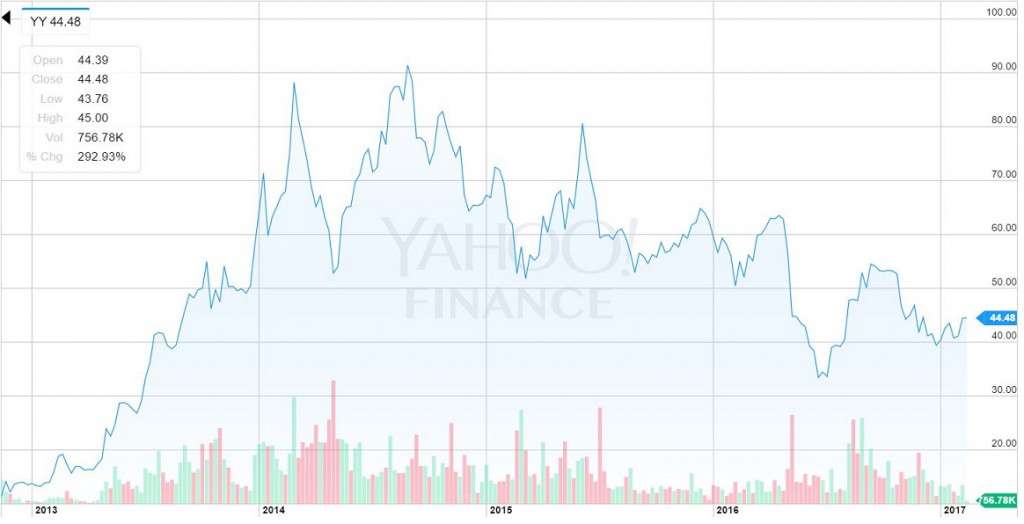 + History of being innovators (other companies copy YY’s successes) and executing on their strategy without major bumps.

+ Active in a sector with strong tailwinds in future growth. Especially online dating and education has shown strongest resilience for growth the latest year(s).

+ Have found a strong revenue model of users “tipping” the broadcasters, almost zero reliance on commercials and banners.

+ Aligned interest with top management (they even tried to buy out the company – scrapped due the the Crash in China Mainland shares).

– A large number of competitors exist in the field, especially in the live music and entertainment broadcast segment which currently is ~65% of current revenue.

– It’s China and everything this company does is in a new field. All kinds of regulations could come up around for example their virtual currency, what is allowed to broadcast etc. For example the government cracked down on girls that were sucking on bananas on a live-stream.

– Revenue visibility going down, are they trying to hide something?

Online music and entertainment has been the big growth driver and it has really taken off to the stratosphere. Check out these Revenue figures per segment: 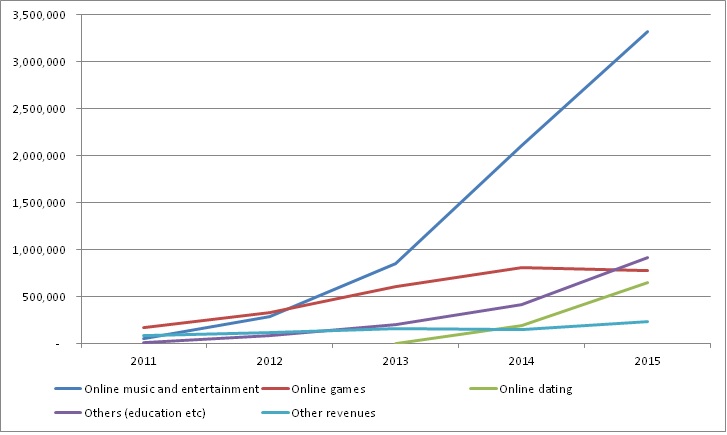 So what is online music and entertainment which pulled of this revenue growth figures? The article linked above describes it quite well, but to make it more real:

It’s girls like this (Link to YY girls page), she has 12.6 million followers on her account and streams normally a few hours per day for her viewers, singing songs and making fun. This is a short clip copied to YouTube of her performances. I liked this song alot, she got talent!

If you go into the homepage you can see the whole tipping system, where viewers give virtual gifts to the girls that broadcast/perform. This tip is bought by virtual money which can be acquired through a multitude of ways (for example linked to Wechat, Credit Cards, etc). The tip is then split between YY.com (~50%), the broadcast channel (~15%) and the broadcaster (~35%).

For another article explaining how it works, read this: SCMP on YY

A sub-segment here, presented in the new reporting format (mentioned later) is Huya.com. For anyone familiar with the incredible annoying PewDiePie, this is a similar concept, where people broadcast playing games. This segment seems to have the highest growth of all currently. I think this clearly shows that Live broadcasting can take on so many different forms, appealing to different groups of people. In my view this is a big part of the future way that we will watch “TV”.

Online games seems to have played out its role somewhat, although still a nice income for YY. This is third party games which utilizes YY’s platform to get more sales, there are now so much competition in this field (Wechat, Netease, etc), so YY does not seem to be able to grow this segment, which feels reasonable. In my earnings projects further down, this segment is assumed to remain at steady state, no growth.

I have to confess I have not fully understood how YY’s dating site differs from other sites, since I have not tried it out. From what I have been able to gather they have introduced a concept familiar from a popular TV show. This seems to have worked very well with the Chinese and as we will see later shows great promise in terms of revenue growth. The company has commented that for online-dating: “YY’s average revenue per paying user in the first quarter of 2015 surpassed $100 USD, and surged up to about $130 in the fourth quarter.” The dating service also uses the “virtual gifting” system. The model has also attracted a flock of competitors, including Tencent’s Huayang and BoBo by NetEase.

This goes under the “Others” IVAS (Internet Value Added Services) column in the reporting, and is somewhat hidden. I have found some comments on that it has not been as profitable as the other segments, but Revenue wise it seems to do very well indeed. Educational programs and services consist of vocational training and language training courses. These programs include TOEFL (Test of English as a Foreign Language) and IELTS (International English Language Testing System) preparation courses. There has been some Goodwill write-downs in the Education 100 program, but I think it’s still a very promising area. Anyone that knows Chinese people, know how seriously they take education and the amounts of money they are willing to spend to get ahead of the crowd.

Looking at the Revenue Stream graph above its interesting to note that it is online-dating and education that is accelerating their earnings. This leads us to next point that we are obviously keen to watch closely how these new high growth segments are performing the last few quarters. Is the growth holding up?

Recently the company decided to change the way it presents it’s revenue split. “In the third quarter of 2016, YY adjusted the way that the Company breaks down its revenue. Instead of segmenting its revenues in four categories – online music and entertainment, online game, online dating, and others – based on its business lines, the Company now breaks down its revenues in four new categories – live streaming, online games, membership, and others. The primary reason for the change is that the Company believes the new revenue breakdown method is more transparent and better captures the way YY generates revenue”

At just this instance when they are changing the breakdown, the visibility actually becomes better than ever before, since we have both the old and the new. Unfortunately the future revenue visibility in my opinion will be much lower than previously. I’m suspecting that it could be to hide the stagnating growth in “online music and entertainment”. Take a look at the figures below and you can see how the Old format even shows a detraction in revenue, whereas the new format with YY live streaming looking better.

Looking at Q2-2016 figures, the new format has more of a “catch-all” in the YY Live streaming category. Whereas the old format is telling us how well dating and mainly education related revenue is doing. I wanted to get a get a better chance of guessing how well online dating and education did in the Q3 report (since this is now gone from the Q3 report and onward). The Q3 report is hinting at what is doing well: “The increase in live streaming revenues was primarily driven by the growth of online dating revenues and Huya broadcasting revenues.”

I did some reverse engineering on these figures, it does not perfectly add up (1% error margin), but it gives me a possibility to guess how well online dating “could” have come in and as important, how little the online music and entertainment grew. It gets a bit complicated here since I will be using data from the old and new way of presenting the data. I will spare you all the details how I figured it out. But by knowing what the total comes in at and looking at historical growth rates in the education section and with the comment that growth was driven by online dating, I can almost pin-down all the estimates (with a lowish error margin).

What does all of this data mean?

This all gives me a good base to make projections for future state of revenue generation, based on historical growth rates for the different business segments.

I use the following conservative valuation assumptions:

Cost of Capital: 12%, after 5 years decreasing to 10% account for normalized riskpremia of mature company.

I use the following Bullish valuation assumptions:

Cost of Capital: 10% which is more in-line with market practice (Damodaran suggest a rate in this range).

With Convertible Bonds priced at 110 USD per share, that probably also sets some type of ceiling here around the same level.