“If you want to be a Millionaire, start with a billion dollars and launch a new airline..”

After some mistakes in my early trading career, where I lost money on airline stocks. Combined with understanding more about the industry, how unprofitable airlines are held afloat by governments pride in having a national airline and how this created an unhealthy price competition and inefficiencies in the industry. I concluded that the business model is dead and I should never waste money on trying to buy airline stocks on the cheap. And yet, here I am, sitting at my desk contemplating how to best write a post about why I see great opportunities in some airline stocks, one in particular.

Last spring I for the first time read investment letter buying into a airline stock. This was from a well known European Asset Manager called Alken, they had started to build a position in Ryanair. At that time I couldn’t really see the big upside in a company like RyanAir, sure oil was cheap, trading below US$60/barrel, it had already bounced from lows at US$45 and was surely trading up soon again. Then everything happened at once during the early summer of 2015, the Chinese stock bubble burst. With it the oil price that looked to be rebounding plummeted down again, stock markets trembled. But a few companies not just held their ground, but advanced steadily, one of those companies was Ryan Air:

Come winter everyone investing in stocks wanted to know what happened with oil. If oil went up, stock markets went up, if oil went down.. ..well you guessed it, stock went down. An “unnatural” correlation between stocks and the price of oil had appeared. The reasons for the market behaving like this is a post of it’s own, but for now let’s establish correlation as a fact. This becomes a problem with anyone up to task of creating a diversified portfolio of for example stocks. The importance of diversification is something we will touch upon in many future posts. An un-correlated asset, everything else equal deserves a higher price than an asset 100% correlated with the rest of your holdings. The short answer to why it is so, is that with uncorrelated assets you can reach the same expected return which much lower risk (volatility).

And what lately has happened to the market is that almost everything is correlated to oil, meaning everything is also correlated to each other – except assets which become so obviously more valuable when the oil price falls, that they possibly couldn’t trade down with the rest of the market. I argue that airline stocks should be such an exception. The Ryan Air graph above is somewhat proof of that as well.

So, OK, you might buy my reasoning about being uncorrelated, but that doesn’t make all airline companies a screaming “Buy”. They still have all their problems from the past and have a great history of destroying shareholder value. Better margins for airlines through the low oil price is all well and good, but like Ryan Air the stock has traded up already, we are a bit late to the party.. But are there some other airline company that could be interesting? I have one candidate, I hated company, which many large research houses has stopped following. It has during the last years taken steps to turn-around from a crisis that brought the company just a few years ago to the brink of default. And the company has a nice twist as well, which might be the best way to play this, through it’s preferred shares.

Yes, what I’m talking about is SAS, listed in Sweden/Norway/Denmark, the pride of Scandinavian aviation, although lately with stiff competition from Norwegian. I will build my investment case on a few facts and not get bogged down in all details of the company: 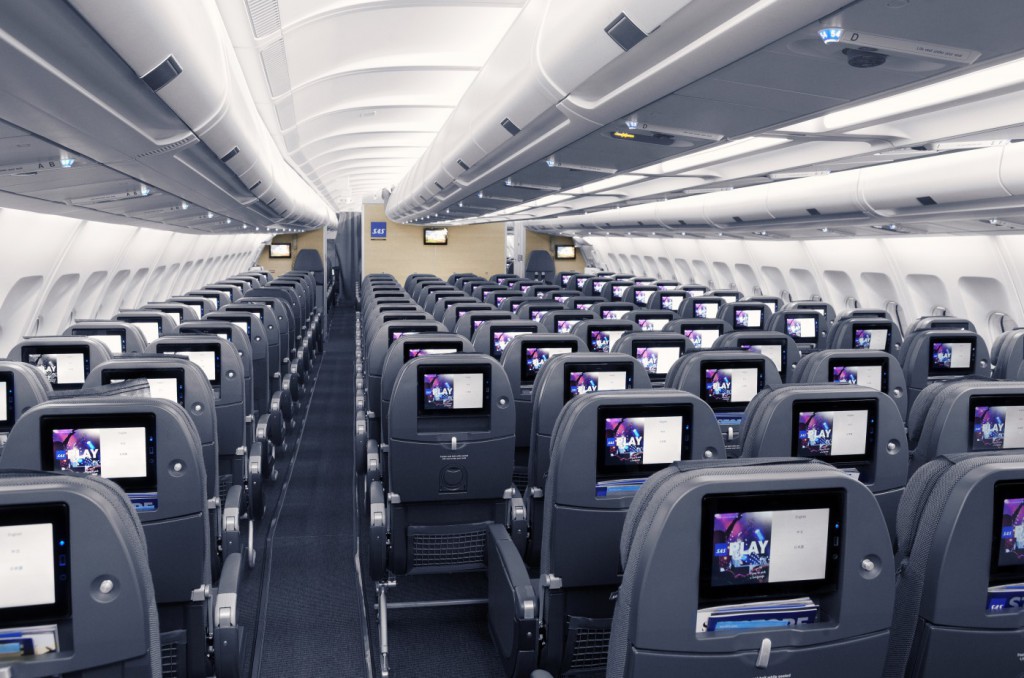 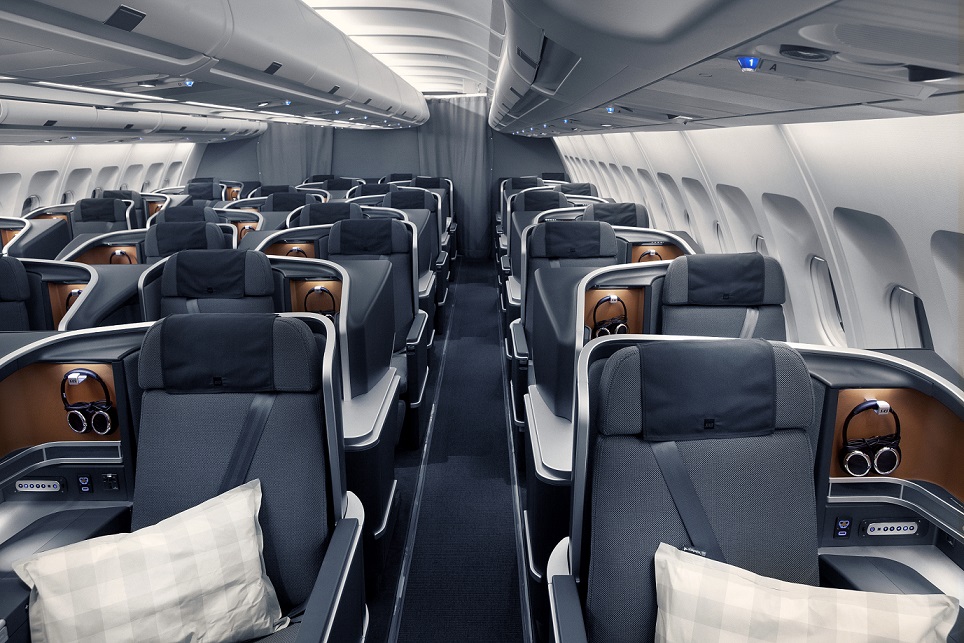 Now to the juicy part of the investment case, how is the airline affected by the low oil price? Well airlines don’t fly on oil, they fly on Jet Fuel, these prices can differ due to refining costs and other bottle-necks, but by-and-large the prices follow each other very very closely. SAS applies a hedging strategy, mostly for the coming 12-months but also further out.

Let’s look at what SAS themselves say about this, this is how much they hedge according to their latest Q4 report: 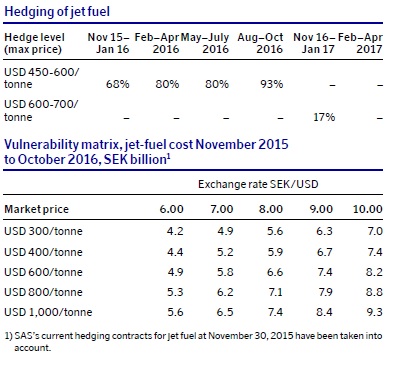 As you can see in the upper graph most of the fuel is not bought “spot” but rather on Forward contracts about 12-months out. So for-example now is Feb-2016, they will buy their fuel consumption for Feb-2017 today at the 1-year forward price. So if we can find the forward price and combine that with the lower matrix on cost of jet-fuel at different price points. We have a clear picture of how much SAS saves on fuel.

It’s very hard to find accurate data on the forward prices of jet-fuel, but it’s easy to find on oil, so oil will have to be a proxy for jet-fuel. Here you can see spot jet-fuel vs Crude oil follow each other nicely.

Spot price of Jet-fuel in USD per tonne is approximately a factor *10 the price of Crude oil per barrel. So Crude is trading at US$32 that means Jet-Fuel costs US$320/tonne.

This graph below, is crucial to the analysis: 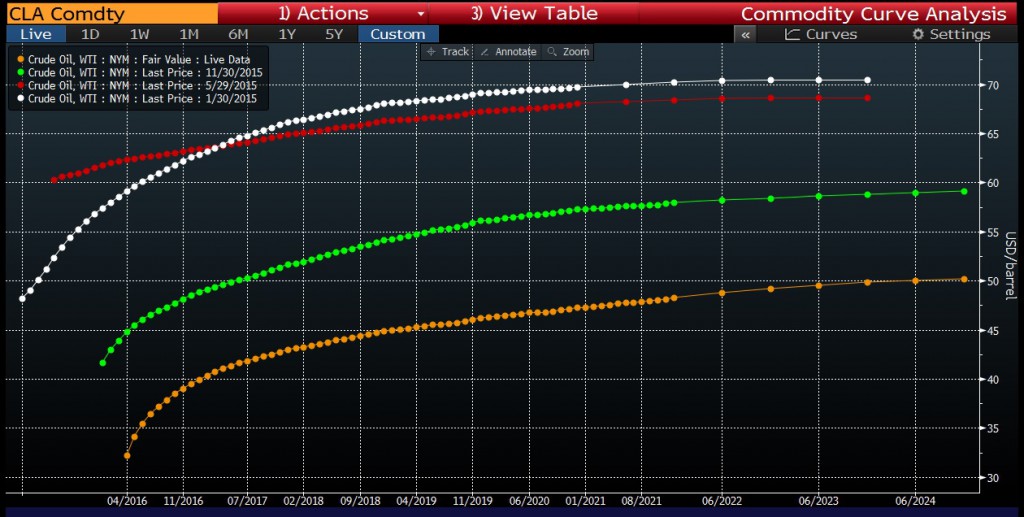 The red-line tells you what the Forward curve looked like end of May 2015, in the middle of the period of current hedges.

The green line tells you what the Forward curve looked like when the above “fuel matrix” was printed in the Q4 report (end of November). As SAS own matrix indicates their hedging is done in the US$450-600/tonne range, which is in line with the oil forward curve moving from the white/red line towards the green line between Nov-14 to May-15 and Nov-15. So we know now fairly well how much SAS has been paying for their fuel up until November. Mostly in the US$550-600/tonne range.

The orange line tells you what the Forward curve looks like right now. This is what they currently are locking in the fuel 12-months ahead for. The graph might be somewhat unclear, but 12-months out on the Forward curve is at US$40/barrel, which mean Jet-fuel at US$400/tonne. So we have a price decrease of up-coming fuel consumption of about US$150/tonne on the conservative side, this is not taking into account the part not hedged, which is consumed at spot prices, which now are at US$330/tonne. So very soon we will start to see realized cost for fuel dropping with at around US$150/tonne, with USD at 8.5 this gives us realized cost saving of 525 MSEK per year. And with oil prices staying this low the spot price consumption, we will in total see a drop of about 200 USD/tonne and a cost saving of 700 MSEK.

On these factors I believe SAS to be a misunderstood stock and I put a target price of SEK 35 within 12-months.

But what might be a better way to play this is through SAS Preference shares issued a few years back at 500 SEK per share. The Pref is currently trading at 525 SEK with a healthy 9.5% dividend yield. With the already locked in cost of fuel for the coming 12 months, the cash flow situation is in a great position for improvement. As I see it, the main reason why this stock has not traded higher, is that 2 years out SAS has an option to buy back the Pref at 525 SEK, but, that is 2 years out and if you can reap 9.5% per year for the coming to years, at a reasonable credit risk, it’s really a bargain. The Pref was issued at 500 SEK when oil-price still was in the US$100 range and the shares were gobbled up by Institutional investors. Now we have both the lower oil price but also in other ways a much improved situation, but the Pref is still yielding almost as much. This is as I see it a worse mispricing by the market than the ordinary share. Yes you risk losing money mark-to-market, but in 2 years time SAS either need to buy-back at 525 or raise the dividend even further. I believe they will be able to issue bonds at much cheaper levels in 2 years, and use that to buy back all Pref’s.