2019 was a disappointing year from the perspective of not nearly meeting the returns of my benchmark MSCI World. On the other hand the portfolio is at all time highs and has in total delivered a fantastic return since I started the blog. The Global Stock Picking portfolio is up 14.3% in 2019, that compares to MSCI World Total Return (i.e. including dividends) up 28.4% on the year. The GSP return is also including dividends but no trading fees deducted. In the counterbalance to fees, I do not calculate any return on cash, which has averaged 7.8% of my portfolio during 2019. The volatility of my portfolio was 9.7% vs 9.8% for the benchmark. 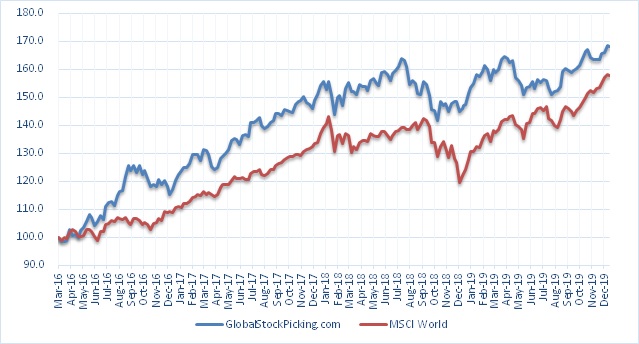 I concluded my last years performance review with that I thought we had now entered a bear market. I probably held that belief sometime up until the summer. This created a certain defensiveness in what I invested in. For example I increased my positions in tobacco companies and other more value related positions. In hindsight I also spent a little bit too much time on my Speculative investment bucket, with a number of investments, like JD, UR-Energy, Irisity and Swedbank. I made some attempts at looking at new sets of companies, like 3D-printing. Where the holding AK-Medical became the best “play” on this theme. This became a very lucky timing, since the stock doubled in a short time-frame after I bought it. One of few holdings really saving my performance during 2019. This was also the year of the trade war escalations and Hong Kong protests, which put a dampening mood on the Hong Kong exchange, where I have a number of holdings. But the company most directly affected by this that I hold was Dairy Farm listed in Singapore. It’s most profitable market Hong Kong was hit hard and Maxims which runs restaurants in HK is now hated by a large part of the population.

Some conclusions has emerged for me during 2019, not at least from my post the other day where I went through all stocks I sold. By the way, that post is now updated with all the missing graphs and comments. Apologies for this, it was a long write-up and something went wrong when I was cutting and pasting pictures/text. Let’s move on to my 2019 conclusions:

1. Only buy companies where I have an edge in my investment

If you are a frequent reader of my posts you will have seen that I talked more and more about edge in the past year. I only want to only invest into companies where I can at least hypothetically see that I could have an edge in my investment. The easiest example of a clear edge is that the stock is overlooked. Often stocks are overlooked because they are small illiquid companies, but it could also be for other reasons. This gives me an opportunity to buy a good or great business to a low valuation if the few market participants looking at the particular company has not managed to price the security “correctly”. There are many other edges, which I have explored and mentioned in other posts. This means I will more or less never invest in a company like Microsoft, or Apple, although they are fantastic businesses. Does that make sense when they have been among the stocks that performed best in the world in 2019? Well, to me it does, because if I’m buying stocks without any type of investing edge, I might as well just buy an Index ETF! Actually the end goal of this blog has been to explore if I’m good enough at this to long-term beat the benchmark. Against all the clever people out there in the world, managing to pick a basket of large cap stocks that significantly out-performs the benchmark, is very very hard. I think there are some people clever enough to do just that. I’m not that clever, I need something easier, where I have a head start to do well. I took quite a lot of action in the portfolio during the autumn this year due to this: Portfolio changes.

2. Focus on finding good and great businesses at as reasonable prices as possible

It was clear from all the companies I sold, that not nearly enough of them are actually solid businesses fundamentally. The graphs I presented of all sold stocks, where stock price graphs, and that can deviate from fundamentals obviously. But not for so many companies over such long periods of time. I hope I have improved already since those investments I sold back in 2017/2018, because too many of them where pretty poor companies to hold long term. Which means I should not have bought them in the first place (always easier said with hindsight). I like to buy growth at a reasonable price but I need to get a touch of more quality into these businesses as well. I hope if I redo this exercise of “here are all the stocks I sold in 2019-2020” sometime in 2023, then a big portion of the companies I sold would still have done reasonably well. The portfolio should be of such high quality that the stuff I sell, I sell because I found something even better to put in the portfolio, not that the previous investment was fairly mediocre to begin with. Of course that has never been my intention to invest in something mediocre, but I need to come up with more solid investment cases and less opportunistic/turn-around etc.

I think a third conclusion from tracking all my buys/sells, I’m actually pretty good at swing trading stocks. I have since I was a kid been sitting watching stock graphs. Somehow I have a pretty good feel for when companies are at infliction points and I manage to pick them up quite often just before they rally. On the other hand I managed to find a few pretty terrible infliction points on the downside as well, like buying Dignity 2 days before a -50% day, that still hurts, a bit. So I will keep my Speculative investment bucket, because it suits me as an investor, I just need to be better at only swinging the bat at the best cases I see and then focus most of my time on point 2 above.