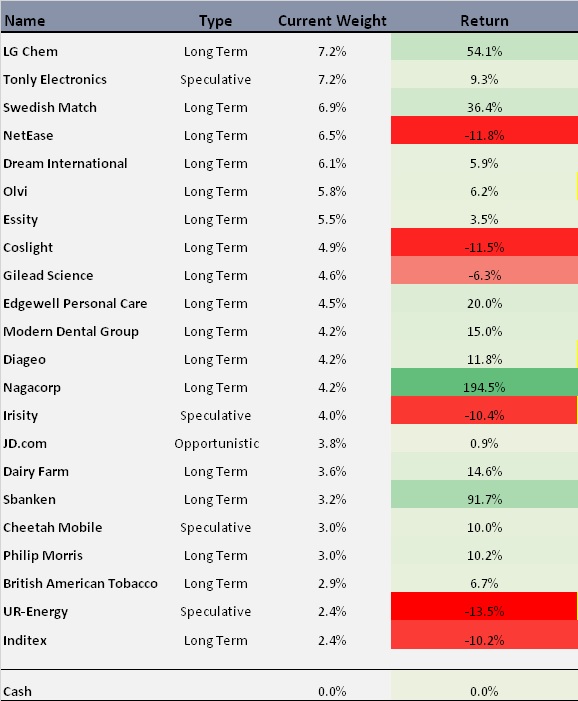 The company posted impressive full year result, driven by pickup in the VIP segment. It seems the bond issuance was needed to give the company enough capital/credibility to run these VIP rooms. 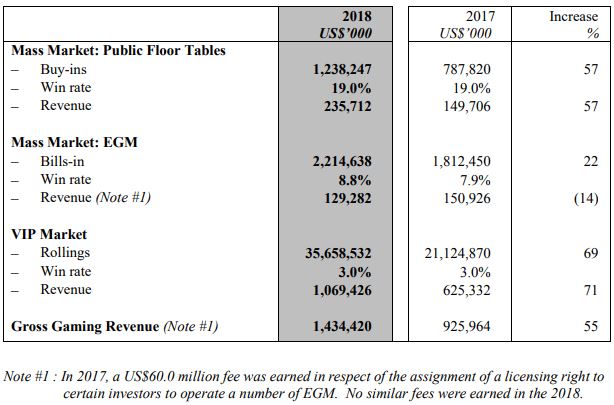 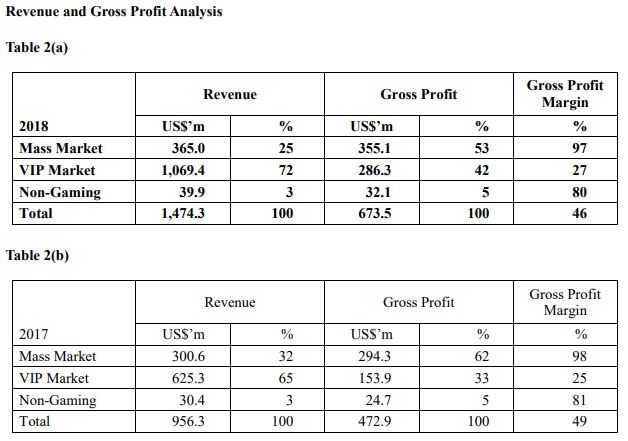 For the first time the company also gave some clarity on how important the junkets are for bringing in the VIP business (which we kind of new but didn’t have exact figures on):

What I saw as the most positive in the results were how they plan to expand their junket co-operations, which will most likely continue to expand the VIP revenue. Quoting from the report:

“Apart from Macau-based junket operators who were already operating with the Group, Suncity Group signed an incentive agreement with the Group to set up a fixed base business operation with full-fledged office facilities, which commenced business on 1 March 2018 and contributed to increased number of players and rollings. To fuel further growth, the Suncity operations in Naga2 will be moved to a larger and more desirable location in the first quarter of 2019. The Group expects all top four Macau mega junkets will operate in Naga2 by 2019. These junkets contributed 70% of Macau’s total VIP rollings “

They are now also planning to expand the Cambodia casino with a third complex called Naga3. At the same time the Russian project is kicking into final stages. The company is still trading at a 25% forward P/E discount to Macau casinos Sands and Galaxy, from this perspective there is still upside. What could upset the earnings would be increased tax from the Cambodian government, the bonus set aside to the majority shareholder is also an annoyance. What worries me the most though is how they will finance the Russian project as well as Naga3, in the past share placings and convertible bonds has been the answer. I still think this could continue to be a great investment as long as the majority shareholder let us smaller shareholders enjoy the same benefits as him. Given the track-record of the majority shareholder and to not exaggerate my China exposure too much, I’m happy to keep shaving off some profits and keep this as a mid-sized holding in the portfolio. Obviously it would have been better to keep my full holding until now, but I kind of like the strategy of taking profits along the way, at least in something which has a bit higher risk profile as Nagacorp.

This holding was for me proper punting on a quick reversal after a brutal sell-off, that has lasted for many years now. I strongly believe in mean reversion in general and this could have been such a case with skewed probabilities to the upside. My thinking here is somewhat similar to my Uranium bet which also seen a brutal sell-off over many years. The problem is that the shipping sector obviously is very complex to really understand (I also read the book Value and Opportunity read on shipping). I have not attempted to become an industry expert here, rather just look at day rates and observe that over long periods of time, there are these dips and always a recovery at some point. That doesn’t mean that my holding Scorpio necessarily ever will recover, they could go bankrupt along the way. In this investment I have also been inspired by investors like Cobas with famous Spanish investor Parames, who has taken a large bet in this sector. I still think this could be a good bet to have in the portfolio. My reason for selling is rather simple, I need to keep some type of stop/loss when I don’t understand the company that deeply. Secondly I also I became fully invested, meaning I had other better investment cases that I wanted to enter. Somewhat unfortunately this holding rebounded strongly after my sell-off, as has been the case several times before when I exited a position on price weakness.

I have given a brief introduction to Irisity in this post: Major Portfolio Changes. This is a speculative holding and should be sized accordingly. The reason for my increased conviction is three fold:

Together I see the above as big enough positives to increase my position. The market cap of around 320 MSEK means the market is pricing in a very low likelihood of breakthroughs with customers. I also think the likelihood is low, but maybe not as low as the market believes. I’m very excited to follow this over the coming years given the large potential in quickly growing market segment. To also mentioned some worries, the company recently raised money through a private placement. The PP was not fully subscribed showing that Institutional investors are still not believing in the company. Given that the PP was not fully subscribed the company needs some breakthrough orders fairly soon, otherwise the cash will probably run out and more rounds of financing will be needed.

This holding I want to dive a bit deeper into and present to you with more detail. So I will later follow-up with a separate post on this company. This is a high risk holding, with a pretty eccentric CEO and majority shareholder. There are also some lawsuits hanging over the company and some slightly shady operating practices in the past (maybe the name is hinting at this). All of this adds to this being high risk holding on many levels. On the plus side, the company seems to be holding some very decent assets and a lot of value is hidden in companies it has stakes in (some of that value was recently unlocked with a sale of a stake in Bytedance). The company has also initiated a 12 month share buy back program of up to 100m USD, with a current MCAP of 1000m USD. The company is sitting on cash of about 500m USD and has nice cash flow generation. Stay tuned for a proper write up of this company. 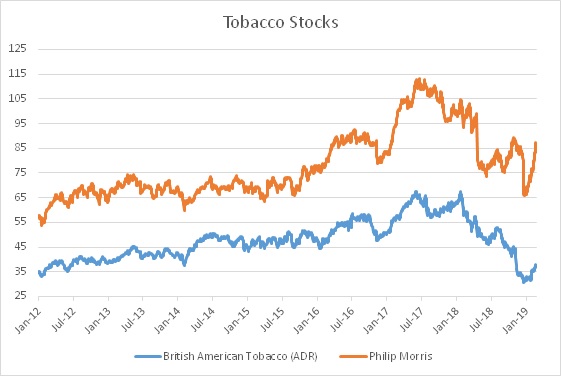 I have to start here with a correction, my math was a bit off when calculating how big allocation these two companies would get in my portfolio. After actually doing the math, these two holdings got a 2.9% position size each, meaning in total 5.8% and not around 7% total as I previously stated.

I want to direct you to this excellent post by Lyall Taylor: The art of worldly wisdom, smoking, and British American Tobacco. I would say I agree with most of what is written by Lyall and he expresses many of these industry dynamics in an excellent way. I have for a long time also kept my eye on these companies, with the view that these are defensive high quality companies, although in a somewhat questionable industry. In my view these are excellent long term holdings, with high dividend yields and strong stable cash-flow generation. The only problem has been that markets have let the multiple run away to such a degree that I felt it was not viable to invest, not even long-term. Now with this sharp sell-off over the last years they have come down to not historically record cheap levels, but at least a point where I feel they are not expensive anymore. These two holdings kind of concludes my search for defensive holdings to my portfolio. I might invest in some more defensive stocks, but I will not “hunt” for it, as I have done up until now. I was a bit lucky with my timing, since I’m already up 10% and 6% on my PM and BATS positions.

It’s usually quite hard to figure out, but if possible its always nice to understand who is selling (and buying) when a stock moves up or down. I think the recent years of ESG (Environmental Social Governance) trends has put a lot of pressure on many of my holdings. I hold companies like Diageo, Swedish Match etc, all in “vice industries” which no longer is OK to hold for many institutional investors. All else equal this should have contracted the multiple for these stocks when many investors have been “forced” to sell.  So for us that do not regard these type of moral dilemmas it should mean a better possibility to pick up shares on the cheap. Which could possibly explain part of the sell-off in BATS and PM as well.

I would also like to emphasize like someone commented on the article, the tax income brought by smoking. In most countries this puts a strange conflict of interest in place. A not so fun fact with China as an example, almost 6.5% of total tax revenue in the country, comes from tobacco (0.8 trillion of 13 trillion RMB). I think that’s a staggering figure and although China is somewhat extreme in this statistic, most countries has a significant portion of taxes coming from tobacco.

22 thoughts on “Follow-up on portfolio changes”