For 2018, the Global Stock Picking portfolio is down -2.5%, that compares to MSCI World Total Return (i.e. including dividends) down -8.2% on the year. My return is also including dividends but no trading fees deducted. In the counterbalance to fees, I do not calculate any return on cash, which has averaged around 9% of my portfolio. Given my fairly heavy China tilt I have in the past compared myself with Hang Seng, down -10.5% on total return basis. During the first 9 months of the year I struggled to keep equal steps with MSCI World, given the benchmarks high weight to the U.S. When U.S. markets sold off sharply towards year end I increased my alpha quite significantly against the benchmark. As you can see in the graph below, I was flat performance wise from mid-October to year end. This meant that my cumulative alpha reached it’s highest level towards year end. Total return is 47% since inception vs 22.8% for MSCI World. Although a negative year is not very encouraging, I’m still happy with the results, given how exposed I have been to China, which has had a terrible year. 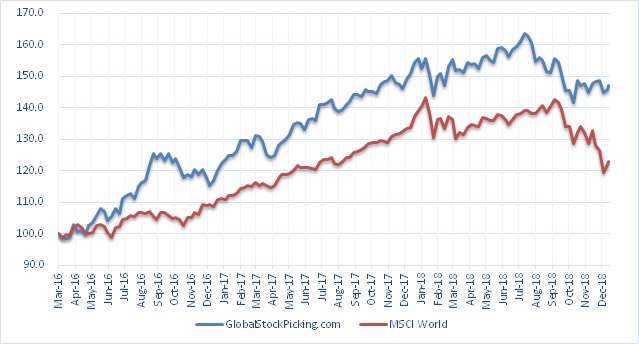 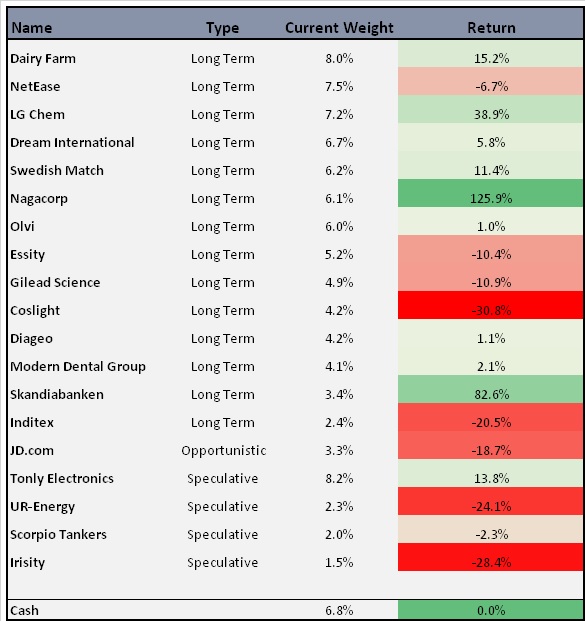 Significant Portfolio changes over the year

I entered into my demographics investment case beginning of 2018. It did not play out as planned, I changed my mind and sold both holdings in late November.

Olvi and Diageo I still hold, I see them as defensive good companies, 2018 performance wise has been unspectacular. Probably Diageo is a bit too big company to deliver outstanding returns, it would be better to find something smaller, like Olvi, which I like a lot. My best investment was the one I sold, Kopparbergs, good return and the stock has totally collapsed after I sold. I think this was a case of my being a bit lucky with the timing, but also being ahead of the market understanding the cider business fairly well. Behind the scenes I have done a lot of research on other cider companies and how the big breweries are ramping up their cider offerings. I also done a lot of on the ground research, always checking stocks in stores around the world and in pubs of course. All of this made my change my mind on Kopparbergs prospects, selling has so far paid of very well.

This selling was partly due to my change in investment style. One reason was that these companies are hard to understand and grasp, therefore hard for me to have an edge against the market. Hard to grasp also means high maintenance to keep on top of what is happening. Performance wise selling these holdings was neither good or bad, on average they are about flat since i sold. So overall they were not bad stock picks, given that flat performance is also out-performing the market.

Radisson was my HNA related turn-around idea, which played out like clockwork. Somewhat luckily I bought at absolute bottom (24.1 SEK) and the stock repriced upwards before the bid for the company came. I choose to sell out before the actual bid at 35.8 SEK, whereas in hindsight, like one my readers has pointed out, it would have been better to keep holding it. Currently trading at 42.4 SEK.

Amer Sports was just that I had pretty good understanding of the Chinese company Anta, which had indicated a bid for Amer Sports at 40 EUR per share. The market did not really believe this, I saw it as something that made total sense for Anta. I got my shares for 34.1 EUR and sold at 38.37 EUR 1.5 month later, currently trading at 38.75 EUR.

I have invested long enough now on the Hong Kong exchange to have confidence enough to invest in the smaller companies listed in Hong Kong. It’s pretty dangerous waters, mis-pricing can last for very long periods of time and many of the companies are not run with shareholders best in mind. Anyhow I found three companies which I believe had few of these dangerous characteristics, low valuations and fairly bright future prospects. To summarize, so far so good, all companies have out-performed the market, although under very low volumes. All these stocks are easily manipulated up/down 10% on a single day. When I bought Tonly and Dream Hong Kong was one of few exchanges that had sold off, and these stocks were in my view uniquely cheap. Now when valuations are coming down everywhere, they seem less and less unique for each day that goes by. It might come a point when these are still good investments, but there are safer options that are valued as low as these. Still I think there is some way to go before we are there.

The timing (mid Sep) of me buying more speculative, loss making companies was not really fantastic. Just when the markets really started to tank. Given that it’s no surprise that these stocks have not performed very well, all of them being a significant drag on performance. Currently I have most hope to Irisity which is making some acquisitions, trying to consolidate Swedish knowledge on video/camera detection software. Given the market climate I might make some changes and lower the weight towards these type of companies, it might get very brutal in a bear market.

JD.com is also an interesting case, the rape charges were thankfully dropped. On the other hand China feels much more wobbly now than 6 months ago. I’m a few dollars under water on this position, a bit hesitant if I should keep it, due to this being 100% China exposure. As argued earlier, with stocks repricing, there might also be better opportunistic investments than looking for a bounce in JD.com.

I believe we have entered a bear market. Opposite to a bull market when the market grinds higher and has sudden drops downwards, I think one can start to see that markets rather grind downwards and have large jumps upwards. That is for me the strongest sign of a typical bear market. 2008 was a bit special, since that was more of a collapse. I don’t believe in collapse this time, rather a longer grinding bear market, like in 2000-2003. It’s not going to be very fun performance wise in the next few years if I’m right. It’s also going to be frustrating finding a good investment case, just to see it trade down another 20%, becoming even cheaper. On the upside, it will be like a kid in the candy store, with a lot of great investments and fantastic prices. Probably all of this will not play out in 2019, but continue into 2020 (if I’m right). As always these things are impossible to call and I will just try to hold my long portfolio through it all.

I recently read a book with the title: China’s Great Wall of Debt – Shadow Banks, Ghost Cities, Massive Loans, and the End of the Chinese Miracle. The author definitely has a negative bias on China but it struck a cord with me. I had not read the book when I wrote this post: Rotate away from China. He of course summarizes it much more nicely in his book, but he brings up a lot of points, which is just in line with my own observations. Reading the book it kind of re-emphasized that something pretty bad is lurking in China and when it turns, it’s going to be ugly. On the flip-side China still has many weapons to fight a downturn. Just the other day PBOC announced a Reserve Ratio cut for the banks which will release a lot of liquidity into the Chinese market. I think the big bad ugly China crash is still some years away, probably dependent on how much of a downturn we now will see in the rest of the world.