With MSCI World being my main benchmark at 23.1% for the year, I’m pretty satisfied with +28.8%, although I did it with a higher volatility than the benchmark. Calculated on weekly returns MSCI World created it’s 23.1% return which an almost mindbogglingly low realized volatility of 5%, that’s a sharp ratio any hedge fund would be proud of. My portfolio came in at 10% standard deviation. When I started the blog I had a heavy tilt towards Chinese stocks, so I also made an evaluation against Hang Seng. As you know Hang Seng has outperformed greatly (+36%), and that contributed to my performance for sure. I’m still overweight (about 15% of the portfolio) China from a MSCI World perspective, but it’s not such a heavy tilt, so I will drop those comparisons henceforth.

I had a probably too active year in terms of holdings turnover, although most holding periods have been about a year or longer. My aim is trying to extend that average holding period closer towards 2-3 years. Only one stock that i bought in 2017, I again sold within the same year, that was Norwegian sports retailer XXL.

I decided during the year to shift away from China, we can say that I was too early. All of my Chinese holdings like Ping An Insurance, BYD, Shanghai Fosun Pharmaceutical and YY had all just started their run upwards, I sold off in all three cases in the earlier to middle part of their revaluations. I reinvested in mostly European stocks that have instead traded sideways. In other cases like Rottneros (Swedish pulp company) and Ericsson, I managed to get out in time, selling at peak and stock trading down significantly afterwards.

Although I would have had greater returns in 2017 by not changing my start of the year portfolio, I’m still fairly satisfied with what I’m holding today. I think I hold a defensive portfolio with companies with a reasonable chance of maintaining most of the earnings even in a cyclical downturn. Of course the multiple will still come down in many of my holdings, so I don’t have any fantasies of being immune to markets falling.  As you probably realized I’m not all too bullish on the stock markets for the coming 2-3 years, let’s see if the market volatility we seen in the last few days is the start of a larger trend. I do really think we should be worried when US 10Y Govies are closing in on 3% yield. As the catch phrase says in front on my Hong Kong skyline picture, there still probably is a bull markets somewhere, in some little sector or niche of the market, hopefully we can find that too. 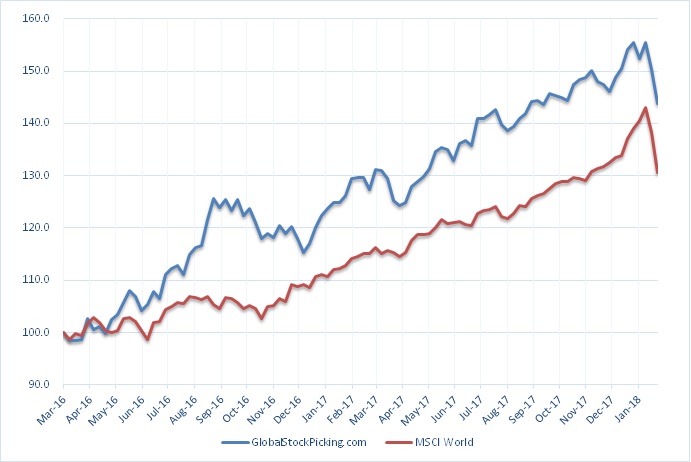 I did not really have a great start to year, the reason is spelled Dignity. The puns that can be thrown about being buried by the investment are actually pretty funny (I was for the first time mentioned on twitter thanks to this). I already dedicated a post to that and I have taken my stance, adding into this position, let’s see over the coming year how it plays out. More interestingly it was good to see how my portfolio behaved in the severe downturn we have experienced. I’m happy to see that the portfolio is holding up at least in line with MSCI World, thanks to my cash positions I have realized about a percentage point less losses than the index over the last 2 weeks.

Looking forward I will continue to rotate my portfolio into positions I’m comfortable holding over longer periods of time, with the goal of reaching average holding periods into the 2-3 year range.

Clean out – Criteo out

Some of my comments have made me aware that all might not be well in Criteo land, I decided to put this in the “too-hard” bucket as well, just as Catena Media. Although its probably a lousy timing to sell right now, stock is ripe for a bounce, I’m taking my stop/loss in this one, selling the full holding.

So, we all know, bricks and mortar clothing retails i hard, really hard right now. Just ask H&M, the darling stock of Swedish investors is really struggling at the moment and they are not alone. So Inditex, or more widely known, Zara, which is still trading at high multiples, why am I buying this now? I simply love their business model. I think they have a very unique market model and position, if its anyone that is going to survive cheap trendy fashion retail, it’s Zara. And as other companies probably will need to close down stores, my belief is that Zara will come out of this even stronger.

I’m probably a bit too early into this stock, hence the 3% weight. The opportunities to buy this company really cheap has not really existed in the past either. It traded at P/E 15-20 around 2010-2012 and today it’s still at P/E 26 after a decent sell-off. As they say, buy quality and hopefully only cry once. But if the multiple keeps contracting I’m more than happy to keep adding into this position until it is one of my major holdings.