It’s always something with this one..

So once again Rottneros delivered a solid top-line, but magically did not transfer fully to the bottom line. This time the company just refers to “non-planned costs”. Next quarter (as has already been guided) will also be bad due to a problem at the Vallvik plant, and the quarter after that is the seasonally weak quarter, due to the planned stop of production. I start to feel like this is a broken record with the same tune, there is always some reason why this quarter is not being as profitable as it should be. With the risk of me becoming a type of investor I don’t want to be (thinking too short term) I anyway decided to sell today. I decided that if EPS for the quarter came in under 0.3 SEK for some reason, I would sell, and I stand by that, although it might be somewhat short sighted. I can’t fully trust this company since they don’t seem to deliver like they did 3-4 years ago, so out it goes.

One should mention that pulp prices are extremely favorable at the moment and SEK still very weak vs USD and EUR. They have a golden opportunity in this market and I think with the top-line production increase, the market traded this stock back to flat for the day. Also there is a dividend that is received as of tomorrow. And that makes me happy, since I then managed to get out with a decent profit (+8%) for this trade, although in my view it was a shitty bottom-line given the nice pulp pricing currently.

Unfortunately my plan of lower portfolio turnover is not working out that well, and my cash levels (after Rottneros sell) are now very high again (~18%). Still struggling to find good investment cases, might use the cash to add in some of my names that have been trading very weak lately, another update will follow.

Looking at my portfolio, after suffering massively from the weak performance of my previously largest holding Coslight Technology (I will revisit this stock as well), my portfolio has now kind of recovered on the rising market tide. As you again can see, my portfolio still has the higher correlation with Hang Seng and follow upwards as soon as the index does well.

A couple of stocks have lately particularly helped performance

A couple of stocks have lately been real dogs 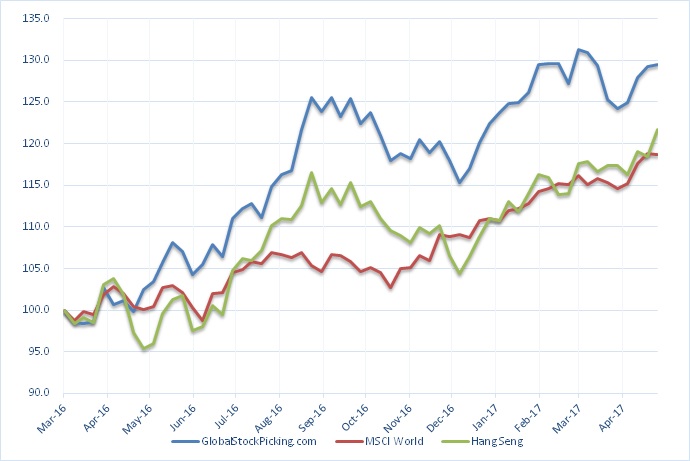