In the future I will move to quarterly performance reviews, so this is the last irregular update. The portfolio has done extremely well and I must say this much out-performance does not come without a certain amount of luck. I feel we are reaching the end of this long bull-market and we are probably moving into a more challenging investment climate over the coming years. Even so I still think there is enough dispersion in the market that it gives some comfort in attempting to pick stocks. The strength of the USD is concerning I think. I don’t see how the US stock market can be at it’s peak and the USD keep strengthening as well, at the same time other equity markets are far from peak levels. Something got to give. 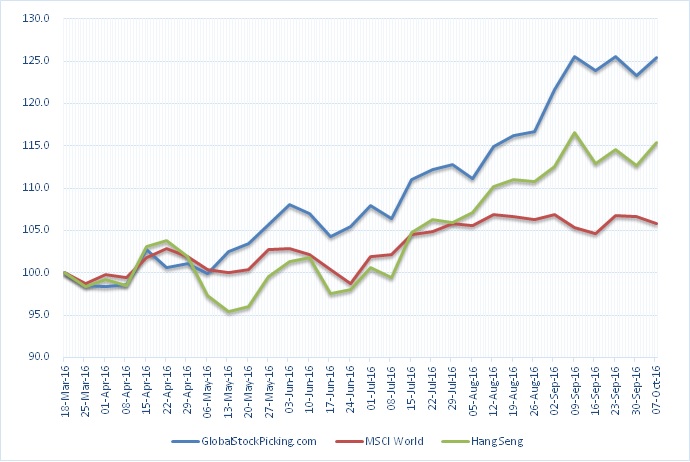 The graph above shows The “GSP Portfolio” performance including all trading and dividends since the blog inception (no trading fees deducted). 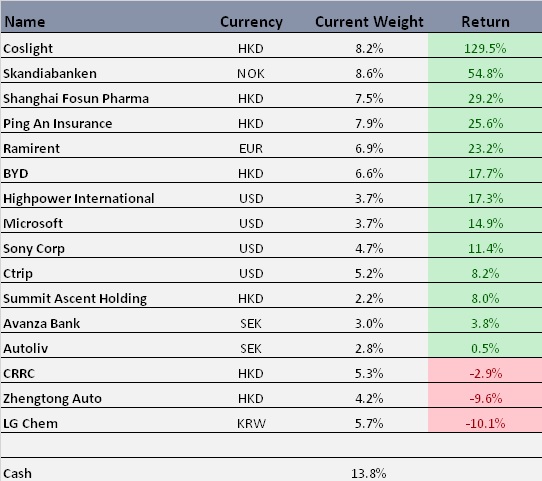 After tremendous results in it’s semi-annual report, the stock soared. I have been analyzing all the battery companies that are listed and I have been able to invest in. Out of all of those I placed my bets into two stocks, that were pure-play battery companies. One has with a lot of volatility, mostly gone sideways, but Coslight had the sales turnaround I was expecting, driven by China’s significant insentives for electric vehicles, both buses and cars. Nice to be right for once, after spending tremendous amount of research on the topic over a 1 year period. Now there is talks about a potential over-supply situation among the Chinese battery-makers, I’m somewhat worried about that, but more short-term than long-term. I see signs everywhere that the growth of Plug-in hybrids and all electric cars is just in its infancy. If this company keeps playing their cards right, this stock could go another 100% within the next 2 years. Previous write-up on Coslight.

This was an example where a lot of things together made me take the investment decision in this holding company. The chart looked like the stock was set for a leg up, I wanted a healthcare stock in my portfolio and the valuation started to look more and more compelling (SinoPharm holding >50% of Fosun Pharmas Market Value). Right after I bought the stock started surging, a quick 25% gained. Lucky yes, but at the same time it was strangely out of sync with SinoPharm. Now the stock is more fairly valued, although still not expensive. Since I have understood from Chinese friends that Shanghai Fosun’s management have a bit of a reputation, I might need to have some margin of safety in this one. I have another “Pharma” holding on my radar, if it looks more compelling I might switch this for something else. Fosun Pharma write-up

This fantastic company is over-delivering for every report they release. But I can’t keep holding the stock at these valuations, so I sold all, at an average gain of over +50%. I’m hoping there will be a rebound, because this is probably still a great stock to hold over the long-term. NetEase full analysis

Well, I thought I got this stock on the cheap, and I still think I did. But it got even cheaper. I’m surprised by how weak retail sales are in Sweden, given how well the economy is doing. This was a play on the Swedish consumer, and although I wasn’t dead wrong, I was not right either. Seems it’s sales through internet channels that are hurting retail all around the world and perhaps also in Sweden? Well I chose to move on since I don’t believe in the Swedish consumption over the coming 5-6 years anymore., even if it pains me to sell something that is still cheap.

Again I thought I got in on a technically good level, where the graph looked like a move up was in the cards. And it was, but it became very short-lived, a month later the stock peaked and then took a serious turn downwards, now sitting -10% from my purchase price. But the stock falling doesn’t generally bother me much, I’m in for the long-run for their battery production (although it’s not a pure-play). But there was a reason for the stock falling, which was plans from LG to merge LG Chem with LG Life Science. I don’t know anything about LG Life Science, but what I do know is that I bought this for it’s future in battery making, not to own a conglomerate with a small part in battery-making (like Panasonic) – frustrating! So, right now it is wait and see, I’m not ready sell, especially when the stock is trading fairly cheap. On a more positive note the Chevy Bolt is coming out with great positive reviews from everywhere, just like the Tesla model S before the Tesla share surged with 300%. The Bolt is very much a LG product, with battery produced by Chem and the electronics inside is produced by LG Electronics. Looking at competitors it’s clear that LG is one step ahead of its competitors in battery technology (price per kWh). Short LG write-up

I leave you with this test drive of the Chevy: