My holding Coslight Technology (1043 HK – listed in Hong Kong), a batter producer in China did what is commonly called a turn-around by presenting very strong first half 2016 results. They actually issued an pre-announcement that the results would be significantly better, but the market did not react much on the news. Anyhow the results for H1 2016 was an EPS of about 0.36 HKD per share and at the time the stock traded at about 3.8 HKD. Multiplying the result with 2 gives a forward P/E of about 5, so I think you can understand why the stock soared 30% the next day. Since then the stock has continued to trade very strongly and in a wobbly market closed today at 6.7 HKD up +76% since the result announcements. Since we bought our position in the stock at 2.87 HKD we are now up +133% and our first stock price doubling since the blog started! This also means that the holding is close to my holding guidelines of max 15% position size. I am therefore forced to reduce my position size somewhat, the question is how much and does the stock still have room for more upside?

The outstanding results were partly thanks to subsidies by the Chinese government on EVs. And also that the subsidies where design in such a way that it favored EVs who bought batteries produced in China. I bought this stock because it is one of the most pure play Lithium battery producers that is listed anywhere in the world. And even this company is by heritage involved in production of lead acid batteries (which they are currently losing money on) and also doing something as bizarre as mobile games for the Chinese markets. It happens so that the mobile gaming unit is actually very profitable and not at all something to laugh away, it has very high margins and I see it as a free option for launching a new hit game (you never know).

A move from lead acid to Lithium battery production

The figures in the Semi-annual reports tell a story. The story told is that lead acid battery sales used to be a terrific product, with healthy margins. Coslight made great money on their products and the stock traded in the 10 HKD range in its glory days. Then something must have happened in the industry, because margins deteriorated to the point were Coslight was losing money on its lead acid battery business. At the same the shift started towards Lithium battery production, which has similar healthy margins as the lead acid batteries used to have. 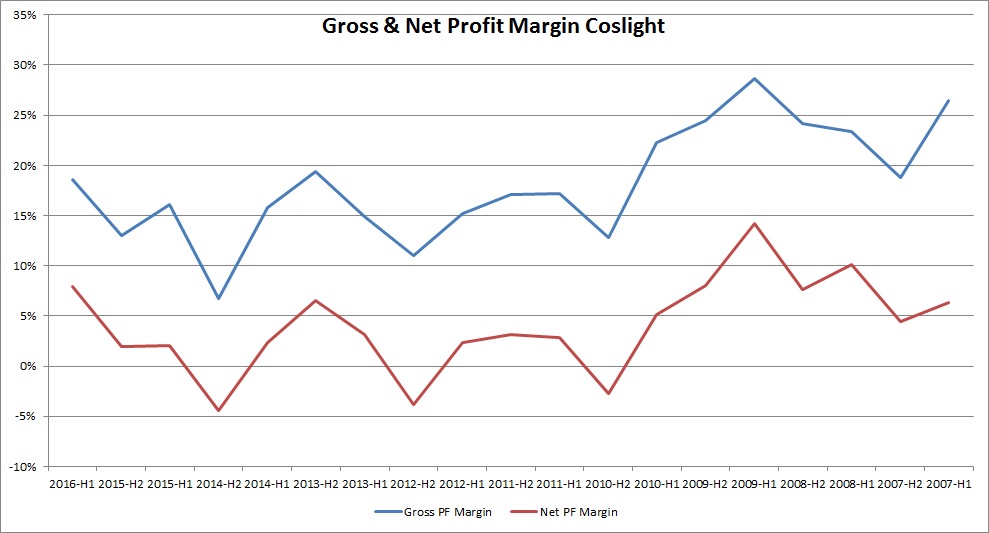 As the graph above shows, net and gross profit margins were healthy back in 2007-2009 and then slumped sharply. Lastly we can see a shift in the trend, where the latest report which created the surge in share price, indicates that the companies sales are back in the healthy area of gross and net profit margin. The reasons for this is because Lithium battery sales has totally taken over and lead acid battery sales has been scaled down significantly. See graph below.

The red line shows how Lithium battery sales has gone from around 30% of total sales in 2012 to around 90% of sales in the last years (although with some volatility). And the blue line also with some significantly volatility shows that lithium battery sales is profitable business. So now we have a transformed company, which stopped producing loss making lead acid batteries and focus on profitable lithium ion batteries. They recently also announced they are going to double production volume (with a 400m USD investment), meaning if they can keep margins at these levels, they will be able to generate a forward EPS of around 1 HKD per share, justifying a price of Coslight of around 10 HKD. The big if is if Lithium battery margins can keep at these levels. I would argue that there is a lot in the pipeline that suggests it will. The demand for batteries is huge among Chinese EV makers and listening to Coslight themselves it sounds like this:

“Power Batteries benefited from Chinese government policies on new energy, the sales volume of China’s new energy vehicles surged to 170,000 in the first half of 2016. The demand for our power batteries grew dramatically for the corresponding period. We have delivered 11,127 sets (2015: 3,061 sets) of all types of electric vehicles batteries, representing an increase of 264% over same period last year. We continued to collaborate with domestic and foreign auto makers to provide battery system solutions for electric vehicles. Our customers include wellknown brands of domestic new energy vehicles manufacturers. Our products include lithium ferrite phosphate batteries and ternary power batteries which are applicable to different types of electric vehicles, including buses, commercial vehicles and sedans. We expect the amount for delivery will rise substantially for the whole year.”

Coslight produces batteries for many purposes, it’s not just EVs that are interesting, but also mobiles, laptops, drones and other wearable devices. One big are of sales for Coslight is laptops. I’m impressed with how advanced Coslights battery technology is for the latest generation of laptops. If you haven’t noticed all Laptop brands are coming out with new ultra slim, around 1 cm thick laptops. And I after some serious digging found out that the HP Spectre laptop comes with a Coslight battery. I find this very impressive, the laptop has good battery life although it is so slim. This gives me confidence that Coslight knows what they are doing and are up fighting with the best battery-producers. 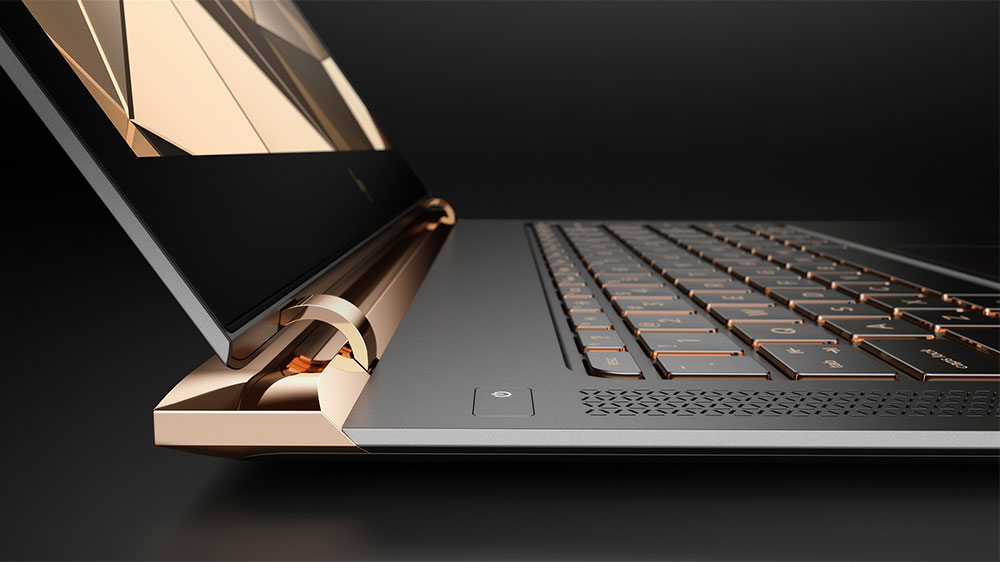 I will reduce my position because I want to follow my investment guidelines, but only by 25%, I want to keep this as a large position in my portfolio, since this is somewhat of a breakthrough and turn-around in the company. I will hold on to my stocks at least until I see prices around 10 HKD per share, somewhat aggressive to expect the stock surge to continue short-term, but reasonable in the next 1-2 years I think.

I already reduced my position once in this stock, now I again sell half my position, since the stocks keeps defying gravity. I’m super happy with the return I got in this stock, but it reached my target price and I see better opportunities elsewhere at these valuation levels.