For the ones that have been following my posts, you know that I have been struggling with how to express my theme of the EV future. I touched upon this dilemma in numerous post and mainly in this one: Investments in EV Value Chain. Today when I reviewed the largest shareholders in the battery producer Coslight Technology, which I’m invested in, something interesting popped up – an ETF called Global X Lithium was a shareholder. I went ahead and looked at what this ETF actually holds in it’s portfolio, and I was surprised to see how close the holdings resembled the list of stocks that I have under watch and try to follow, regarding news-flow etc. This could definitely be a catch all ETF for you readers to buy, who don’t have access to, or do not bother to buy stocks in markets around the world like I do. I won’t invest in an ETF for this blog, but it’s still worth exploring the ETF.

The ETF tries to replicate the Solactive Global Lithium Index, in the index description one can read: “The Solactive Global Lithium Index tracks the performance of the largest and most liquid listed companies active in exploration and/or mining of Lithium or the production of Lithium batteries. The index is calculated as a total return index in USD and adjusted semi-annually.”

Let’s take a look at how they built the index.

The Index has 25 constituents and it’s interesting to see that I own(ed) several of them (BYD, Coslight and SAFT which I sold due to take-over). I also have Samsung SDI and LG Chem on my watchlist of potential stocks to invest with.

I was a bit confused with why Tesla and BYD had so small weights in the Index, although they are huge companies MCAP wise, this was explained in the weighting rules:

The ETF is important

In my view this ETF can be important for a few reasons. One is as an indication of investor interest in the EV-Theme, by looking at how much Assets it attracts. Here is a historic graph over Assets Under Management and Price since it was launched: 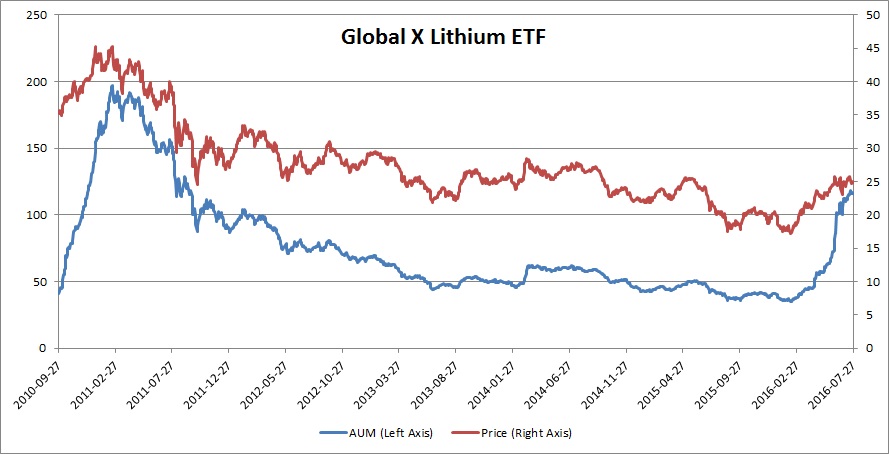 Without doing a too deep dive, I’m guessing the ETF was promoted at launch and thereafter interest has fallen as performance has not been good at all. A few other things can be noticed, starting around this spring the performance has turned around and interest (AUM) has at the same time spiked. Still in relative terms, this basket has massively underperformed most benchmarks around the world. The Index is down -41% since start of 2011 whereas S&P (without dividends) has returned 70%. This year, 2016, the Index has outperformed S&P with 16%. Could this be start of a turn-around and the long up-trend I believe we will see in the sector?

Another interesting factor is something seen in other ETFs that become “too popular”. Fairly small companies can belong to an ETF which gets massive inflows and the ETF providers are forced to buy stocks in the smaller company and thereby pushing the price significantly. This happened earlier with the Cyber Security ETF (HACK US) and affected the small Finish Anti-virus provider F-Secure.

Let’s calculate how much inflow is needed in the ETF to start pushing the price in my holding Coslight Technology. The fund holds a 0.9% position in Coslight. Looking at this years spike in AUM, the biggest inflow was on June 13 with 15.7 MUSD in one single day. This translates to 15.7*0.9%*7.75 = 1.1 MHKD, which is about 30% of an average daily volume, so not enough to move the stock price (the stock was actually down over the day). But this ETF is obviously not something famous (yet). So let’s play with the thought that the ETF gets the same type of exposure as the HACK ETF which grew from a few million AUM to over 1bn USD. It had an maximum inflow of 175 MUSD on one single day. Re-doing our calculus: 175*0.9%*7.75= 12.2 MHKD which is about 4x the average daily volume, obviously a somewhat unrealistic scenario, but you never know.

This ETF might be a good choice for a portfolio that believe in the Future of EV. Just remember that there is a possibility that EV becomes a reality, but competition is so fierce so no money is made by the companies in this space, something like the aero-industry, never put all eggs in one basket.