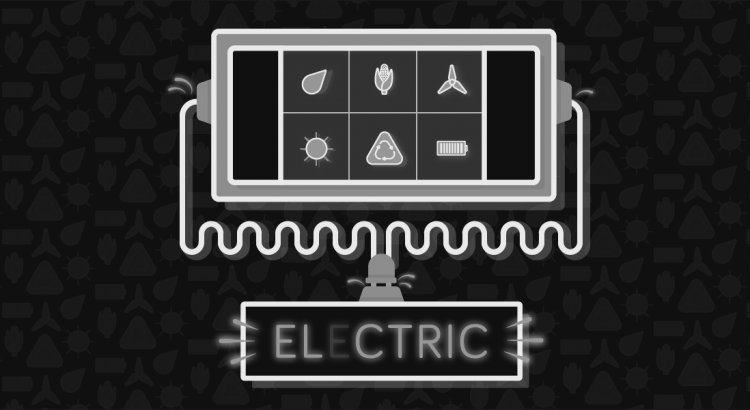 Investment themes are important, because they can be drivers of returns for many years to come. An investment theme is about seeing something that is coming long-term and understanding the dynamics in such a way that you are able to profit from it. This is appealing because most investors on wall street does not have the same long term view that you as a private investor can have. Therefore something that will happen 4-5-6 years down the road, might not be priced into stock prices yet. This is a first of many post on an important investment theme in my portfolio.

Even before the launch of the Tesla Model S I have been intrigued by how electric vehicles will be a major game changer. With the success of Tesla I have dug much deeper into what this will mean for the future, and how to play this to make money. If I allow myself to dream a little bit, my vision in a not too distant future is self-driving electric cars, powered by cheap electricity or rooftop solar-panels.  I was going to write a long post about how this will come about, relating to S-curves and such, but then I came across this excellent video by Bloomberg which sums it up nicely. Although they put a oil spin on the story, the basic message is the same, Electric Vehicles (EV), are coming to take over.

And for those of you that want more than the video-pitch, this article came with the video: EV Oil Crisis

Let’s start to break down this market of Electric Vehicles (EVs). As I see it we have four different market segments of vehicles that are interesting to analyse because they are in the middle of a transformation.

Depending on which country you live in, your view of the EV landscape might look very different. In some countries EVs does barely exist and in others they are literally everywhere. Up until now the differences can largely be explained by different policies in countries and regions regarding subsidies for EVs. Very few EV products so far have been successful without any type of subsidy, the closest one in my opinion would be the Tesla Model S, just because of its remarkable performance stats, which would draw a certain type of rich buyer, whatever the price. So to understand the chances for short term success for brands and products in the large markets around the world, one needs to be aware of the subsidy situation. One very important market to study is China.

China – in the drivers seat of the EV-revolution

What you probably see if you are living in a developed country is an occasional Nissan Leaf and Tesla Model S on the streets. You might think it’s mainly Tesla drawing up big plans for future, but that is not true, most of the action is in Asia. As I see it the leader in the EV-revolution is – you guessed it – China. China has a HUGE air-pollution problem, which I have experienced first hand at numerous occasions. The people feel helpless about the situation, but things are really happening now. Major subsidies are being put in place to shift the vehicle market from petrol to electric. And the part that has taken off first, due to politicians finally stepping up and ordering change, is electric buses.

Take a look at the video below from BYD, a Warren Buffet backed company with a MCAP of 2/3rds of Tesla’s. Here they are delivering electric buses to Shenzhen a 10 million city on the other side of the border from Hong Kong:

The EV revolution for electric buses in China is happening as we speak and companies are of-course gearing up for this change. Particularly in the suppliers of batteries and drive train.

Let’s look at how the subsidies have been put in place in China during last year: 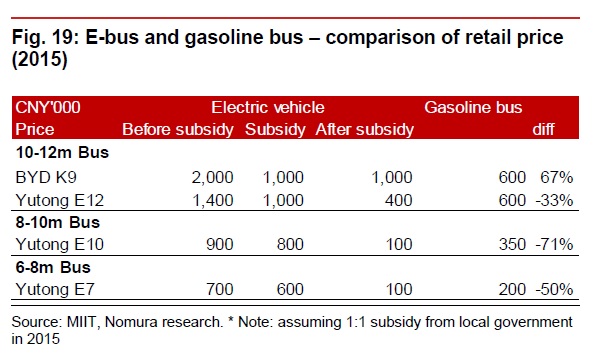 As you can see the subsidies have been so big, that many buses have been a steal compared to Gas-guzzling alternatives (no wonder they are going electric in China). The government realised that these subsidies were probably not very fine tuned, so they announced the New Energy Vehicle (NEV) subsidy rules for 2016-2020. A much more complex set of rules (that are more fair) that we will discuss further in a later post.

I spent countless of hours during the last six months to read up on all angles of this investment theme. There are so many angles to it and it involves so many technological aspects and this whole new supply chain, so it is a daunting task. It has sometimes felt hopeless to grasp it all, when you spend 3 hours trying to understand the different materials (Cobalt, Nickel, Lithium etc) used in batteries, which technology is the best and which company is the leader for which type of technology? More questions sometimes arise than answers found. But a few things I have understood and that will be the starting points in future posts: