The rationale for worries and opportunities in all my holdings are spelled out in my previous post. Today I will just briefly announce my portfolio decisions. One little obstacle in this extremely volatile market is that in the blog execute all trades on close, this might mean quite large deviations from the levels I would have been happy to enter or exit my positions on. Anyhow, that’s how its going to be, the blog NAV is just a proxy of performance.

Some quick thoughts around my investment philosophy in this market:

All in all this raises about 11.5% of my portfolio in cash

This takes some 6.4% of my cash, which leaves me with roughly net +5% cash (give or take depending on today’s close prices). These 5% + ~7% in BBI Life Science (if the takeover goes through) is left to be deployed at a later stage.

The history and development of the Liquid Packing Carton market, or aseptic packaging as it is also called, is a very interesting one. Although the industry is a huge global industry, it has over the years been almost totally dominated by one player.

In 1952 the Swedish businessman Ruben Rausing convinced a local dairy company that his peculiar tetrahedral shaped cardboard beverage carton was the way of the future. The rest as you say, is history. Aseptic packaging as it is called became the most popular way globally to sell milk products but also many other beverages, the packaging being superior in both preserving the drinks taste and ease of transportation. Later on the Tetra Brik was invented and the company Rausing created with these innovative products became Tetra Pak (part of Tetra Laval). The company today has 11.2bn EUR of Net sales. The case of Tetra Pak is interesting because the company has over the years had no to little competition in many markets – a dream situation for any company to be in. But how was it possible to be so successful and why did not more competition come in? Firstly it came down to patents, which gave the company a monopoly position in the early years. Secondly the company has and continues to be extremely well run with a clever sales strategy. Tetra Pak sell the filling machines that creates the packaging, to the beverages producers at a low price. Then making the margins on selling the cardboard box paper used by the machines, which of course will be continuously ordered. The contracts for the machines tied the customer to not buy the cardboard paper from anyone else. In this way the customers were tied to Tetra Pak and had to invest in new lines of machines, to switch to a competitor, obviously at high switching costs. In 2002 it was estimated that Tetra Pak still had 85% market share globally, but around this time things slowly started to change, partly due to regulatory intervention but also due to beverages producers who helped create companies like the one I want to present to you now.

For the interest reader here is some more history of Tetra Pak family: Tetra Pak, a Fortune Founded on a Clever Idea & The death of Eva Rausing and the decline of the Tetra Pak dynasty. For the very interested historian the story above is somewhat simplified. There was a american inventor that was even earlier than Rausing in creating a similar packaging in USA. The company, Cell-O was the beginnings of Elopak. Read the full story here: History of Elopak.

Now moving on to my latest investment 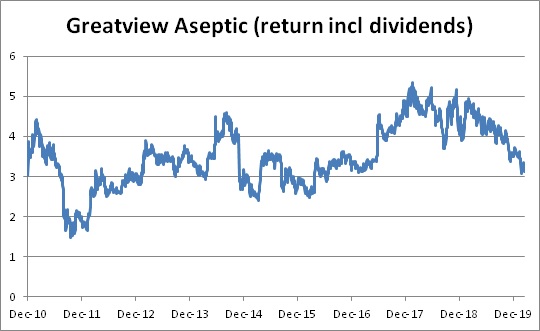 + Operating in a market with Tetra Pak as a dominant player. This creates an incentive from beverage producers to diversify supplier base.

+ Favorable shareholding situation. Company led by the founders who have large shareholdings. The largest shareholder is conglomerate Jardine Group.

+ Very compelling valuation at P/E 11 and EV/EBITDA 6, the company is net cash which de-risks it further. Swiss listed SIG is trading at almost twice the multiples for a very similar business.

+ 8.5% dividend yield with a stable track record of paying dividends.

– Price taker in the sense that they compete towards Tetra Pak on providing same product at lower price point.

– Negative trend of China profit margins and seems to struggle to grow further in China.