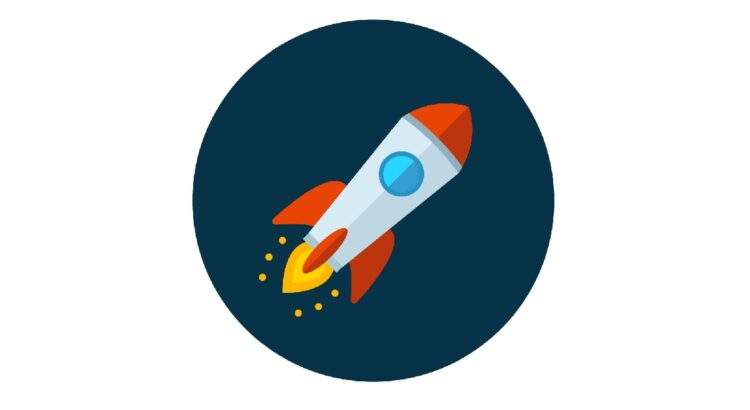 A study of small caps listed on the Hong Kong exchange

Over the last couple of years much of my portfolio performance can be attributed to a few holdings which have 2-5x in a short period of time. The latest one being Modern Dental Group where the price recently just took off. 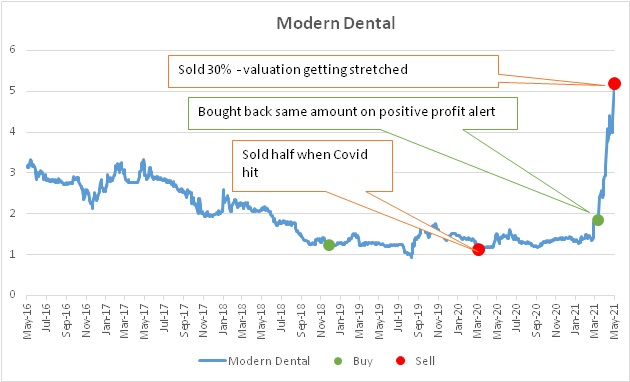 If you want to read my Modern Dental Group analysis just click here.

Discussing with other small cap value investors, investing in HK small caps can be a bit like tapping on the Heinz ketchup bottle. Stocks do nothing for years and then all return comes at once. I hadn’t really experienced it like that in the past but lately this resonates a lot with me. As you can see the price graph of Modern Dental above is was a grueling holding which went from 3 HKD down to just above 1 HKD. Consider that this happened in an environment where stock markets where extremely bullish. Then suddenly the stock just pops fantastic when it happens. I want to explore what drives these sudden burst of returns. How to catch them, how to act when they break out and also try to identify if and when its time to either reduce or sell your position. This is Part 1 which focuses mainly on how to catch these type of holdings.

The very first step of enjoying the returns of a small cap that significantly re-rates is to actually be there when it happens. I have a number of stocks that I held and sold, just to see them sky-rocket later. Or stock that I held for a long time when they started to move upwards I was quick to sell and afterwards looking like a fool when the stock continued to double from my selling price. First step is to actually be there when the stock takes off. As we will see from a few examples of stock price graphs, its easier said than done.

Modern Dental was a success example, let’s look at some failures as there is probably more to learn from those. For the ones of you that have been reading the blog from the very beginning, you might remember this:

You can imagine I was pretty upset with my timing on this Chinese auto-dealer, even more so since the stock almost doubled again to ~9 HKD after my print screen from back then. But why did it go up, did anything change financially? The financials that were known at the time were the mid-year 2016 results. 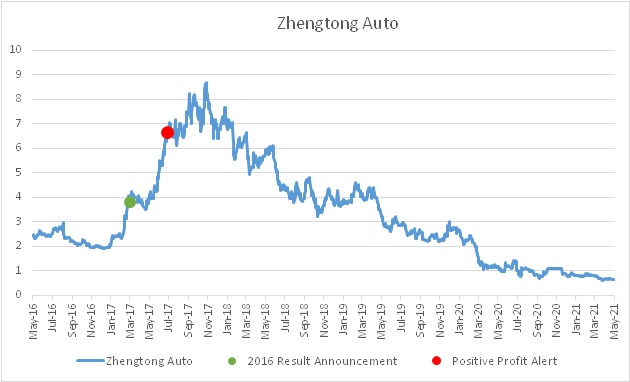 Although 2016 mid year results showed a slight turn-around in revenue growth, when I sold my shares in late 2016 the market was as its most pessimistic. The market after that went ahead and repriced the stock to 4 HKD. With the 2016 full year results out with a decent 9.2% YoY Revenue increase but nothing really to write home about. Without any further improvements to the bottom line the stock went all the way to 6.8 HKD. At the 6.8 HKD price level the positive profit alert for first half of 2017 confirmed what the market already had significantly priced in – the turnaround in Operating Income was here. With the profit alert out the stock traded sideways until the actual semi-annual report was released and the stock afterwards peaked just below 9 HKD. A fantastic journey to have been on compared to the stock price of 2 HKD just one year earlier. Clearly there were a lot of people who understood the dynamics of the car dealer market much better than I did back then (and still do). They probably had leading indicators to track that the turn-around that was happening basically just when I sold my shares. They got more and more confident in the turnaround and bought up the stock – in the end they were proven right.

Lesson number #1: Don’t buy companies for the short term, where others have much better market insight.

I had no edge to invest in a China car dealership turnaround and this seems to have been a terrible business to invest in for the long term (mainly because they have taken on huge amounts of debt). The real conclusion must then be, rather that it was a shame I missed the rocket, I should never have bought this kind of company. 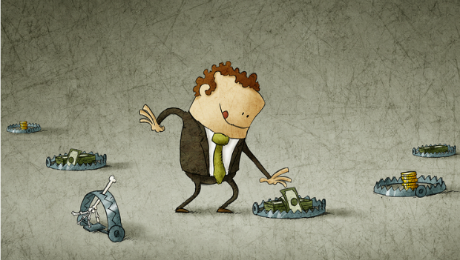 If we then move over to companies that have sound balance sheets, good businesses and valuations are reasonable, something that is good to own for the long term. The dream obviously is to find these companies early and cheap. Later have the market rocket them up to a much higher multiple. It sounds easy and great, there are a lot of troubles with that approach though.

Among my small caps and especially the ones listed in Emerging Markets, they often share some similar features. The feature that often lured me to buy them in the first place is their low valuation compared to their fairly attractive businesses. The problems arise when the market doesn’t give a damn about that I now bought into the company and the stock continues to trade cheaply – for years. Worse than that sometimes, the business does decently well, but the stock price goes even lower due to the multiple it trading at contracts further. This is to me the pain trade – the value trap. Being convinced that this is a “rocket” that has yet to lift off, but the market totally disregards your feelings and nobody is buying it. In the end it puts me in a tough spot if I should stay and endure the pain or allocate my capital somewhere we I actually get some returns, not just pain. Let’s look at some examples what pain actually looks like

Imaging being bullish on EVs and battery cells for Solar energy storage back in 2016. Tianneng is a battery-cell producer making low costs batteries that mainly goes into battery driven Scooters etc (which has seen a huge upswing last few years). Let’s pretend we find this company trading at a low valuation in early 2016, showing good revenue growth and trading at a low EV/EBITDA multiple around 8x. I would have been a pretty happy camper taking a position in this in 2016. In fact back in 2016 I choose between investing in this company and Coslight another Chinese battery producer. 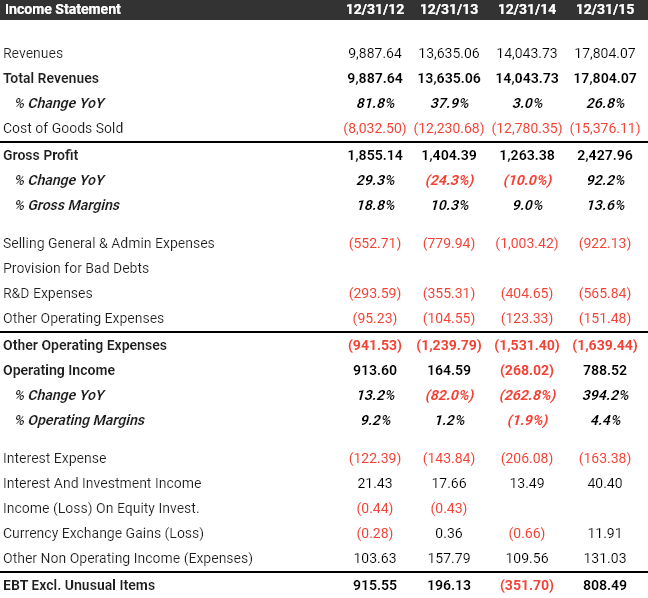 Seems like a solid investment case back in early 2016 right? Well, wrong. The company will in the coming five year continue to perform financially, but the stock market will punish you grossly. Your EV/EBITDA entry multiple of 8x will contract all the way down to below 1x. Imaging being right on the financials, but you get nothing because the multiple just keep contracting as fundamentals get better. So in the middle of a bull market where other EV plays and battery producers are taking new all time highs, we have this company trading below 1x its EBIT. And the share price has done nothing in these ~3-4 years. 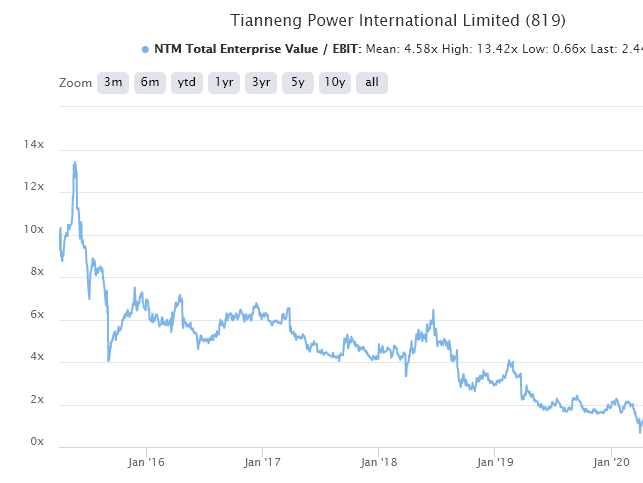 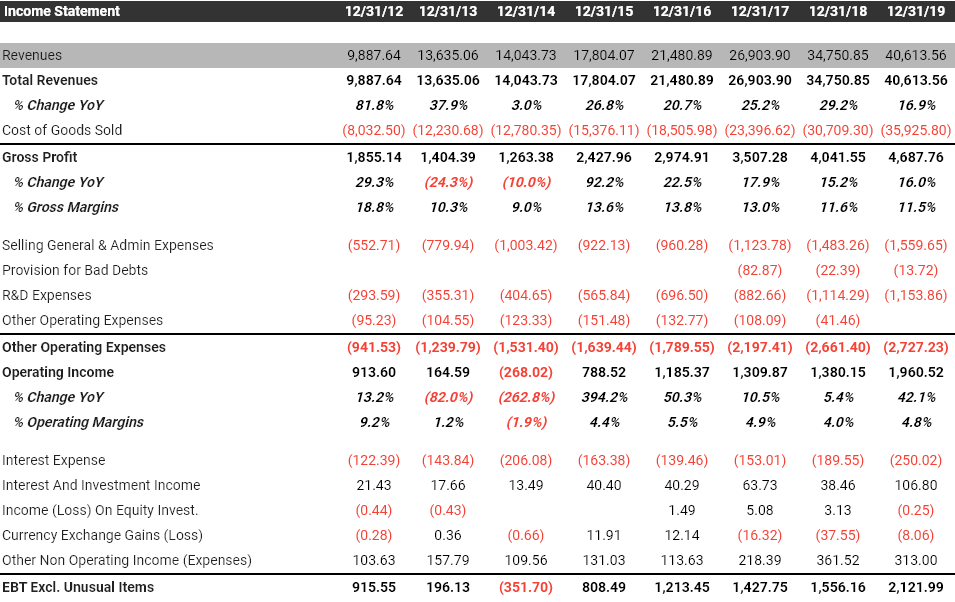 The market changes its mind

Then finally after the Covid crash the market changes its mind on the company and send the stock-price (and the EV/EBIT multiple) through the roof in comparison where it traded just six months earlier. For the avid reader you might remember that I owned this for a short time around the Covid stock market crash. I sold some in the middle of the crash to buy companies I felt more sure off but manage to keep a small portion that turned into a nice profit.

Obviously a company trading at so low valuations most be controversial in some way. And indeed in 2020 a short report was released by Cloudy Thunder: Short report. They might be right long term, but the stock over 1 year later is still trading significantly higher than when the report was released. I’m sure not everything is great with the company, but personally since I owned this and looked at it in great detail, I’m not so sure the short guys are fully correct in their analysis either. Herein lies the opportunity of course, you can’t find a stock trading below 1x EBIT and the case is all roses and sunshine. For the ones willing to take the bet, the stock price went 5x from bottom to peak, even with a short report released “against you”. Good to note also is that the stock is nowhere near its 2016 multiple, the stock is only up because fundamentals improved tremendously, no multiple expansion at all has been enjoyed. 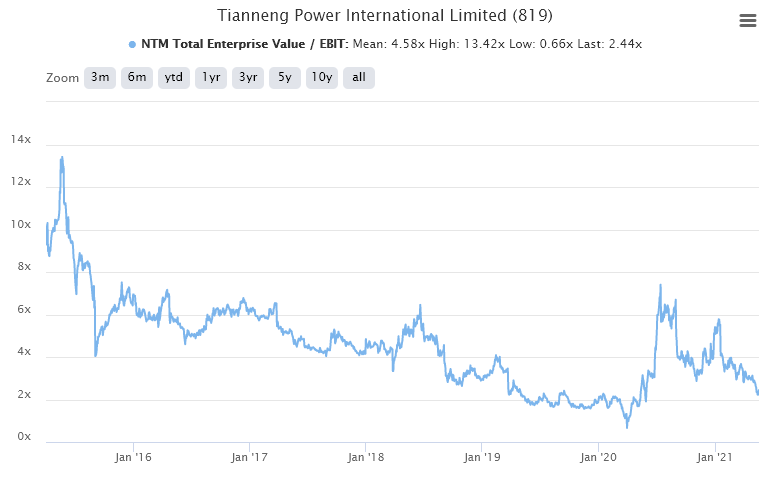 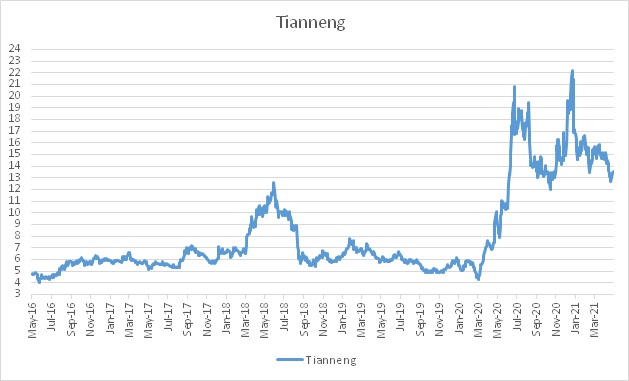 Since I written plenty about PAX and its my largest holding, I won’t go into all the details, but its also an example of a long history of pain holding this company. In this case I was lucky (and hopefully a little skillful) to get in just before the infliction point. 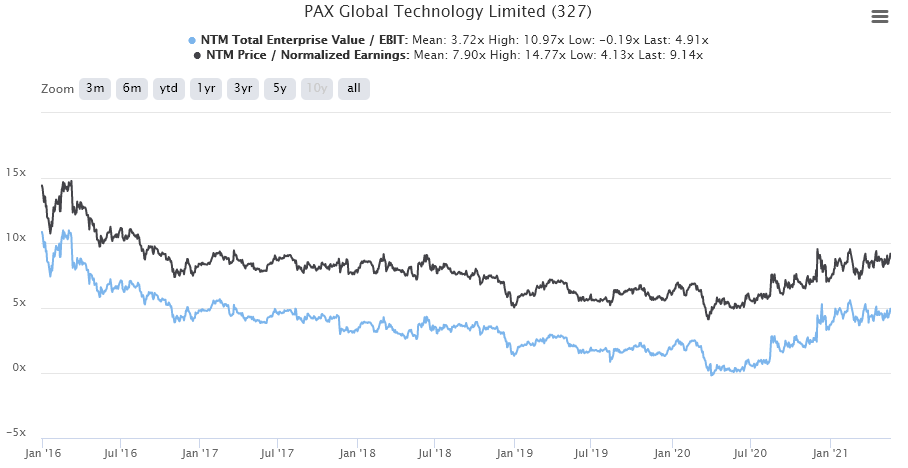 As you can see the multiple just kept contracting for years and in the 2020 March sell-off, the EV touched zero (MCAP = cash). Disregarding cash which might be locked up, also on a P/E basis the stock was trading below 5.

Meanwhile between 2016 and 2020 fundamentally the company has: 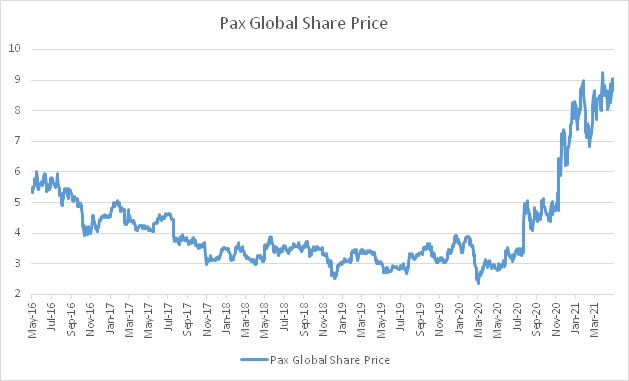 It might seem easy in hindsight when the stock starts to perform that this was a clear winner to invest in. But sitting on a holding that goes down for years, while fundamentally it improves, is a very very strange feeling. The case got better, so should one buy more? But then you are adding to your losing positions, does not seem ideal. Have you misunderstood something that the market has caught wind of? Is it a fraud? When a company behaves like this your head gets filled with doubt if you really know what you are doing. This for sure happened to me with Modern Dental Group, which I sold down to a tiny position on these doubts. Luckily I rebought what I sold just at the infliction (had been better to never sell).

Ideas on how to catch the Rocket

I could go on with many more examples of rockets that taken off. But I wanted to share what I learned it terms of identifying a HK listed small cap that have the right set of characteristics to actually become a future rocket:

These kind of characteristics are fertile ground for future rockets. The risk is that we rush into these stocks and are way too early. Early means that you have to sit through the pain trade, which I have now done multiple times (stocks like Dream International is still in pain mode). As we can see from many of these valuation graphs above, the multiple can go much lower than most of us think is possible/reasonable.

Part 2 will be about riding the rocket..