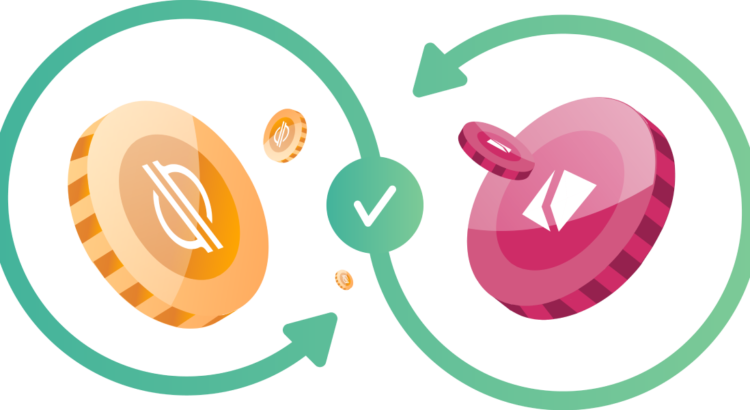 With ~5 years of announcing every buy/sell transaction on the blog, I have now for a while shifted to only post changes under “Trade History”. Sacrificing some transparency but with the aim to focus blog posts on more interesting things than every trade done. I imagine this will be my new format, where I look back on the past months and comment on what I feel is most relevant to mention. This is the batch of trades I will discuss. 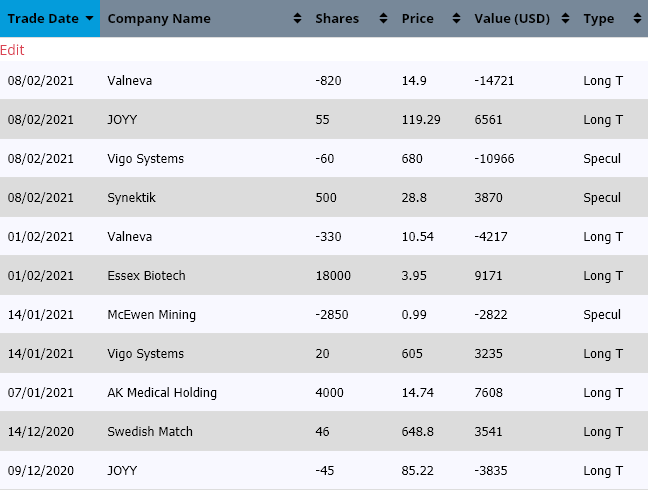 Let’s start from the bottom

It has not been all Joy owning this company lately. The long time reader knows I have been following and owning JOYY (or YY as it was called) for quite some time.

In November I gave my thoughts on the MW situation:

In the end my conclusion is that this was one of Muddy Waters less well written reports. I have no idea what happened on their side and if they already were short or not. But if I was short and my short case mostly focused around the Mainland Chinese part (YY core), I do think Baidu coming in with a 3.6bn USD bid on my short case would make me a bit nervous. It felt like they were not ready to release this report yet but had to rush it out to protect their investment…

..That MW sees a short case in one of my longs, does of course not feel great. But I do have to trust my own research and that says that this time MW is at least not spot on correct in their analysis. The market does not either seem to agree fully with MW. I have to say MW has sowed some seeds of doubt also in my mind of how solid this business is…

Basically these sentences summarizes my actions over the past months. I felt MW was wrong and I decided to keep my holding, but they did make me less confident of holding the stock. Especially if Baidu would back out. So I de-risked and sold down a portion of my position at 85 USD per share. In the past few weeks a number of data points have started to emerge that Baidu is actually going through with the acquisition. At the same time I kept using the Bigo platform and I can see that more and more people enter the platform. The amounts that are being tipped are also substantially larger. I don’t have hard data on it, but its my subjective view by using the app. Other twitter user I discuss with claim to have more hard data on that what I see is correct. This all taken together gave me the confidence to add back to my position and obviously this was at a much higher price. With the cash flow generating asset (YY core) soon gone, I would say JOYY moves from a Long Term holding into a more Speculative one, still with the huge cash pile the company is sitting on, it’s still pretty deep value. The coming year will be very interesting to see where this company goes. Will it shift out cash to shareholders? Will it list in Hong Kong where the valuation potentially would be higher? Will it be able to continue to grow the Bigo platform? All three are triggers for the stock to probably double from here.

I keep adding to this holding which is not really moving much share price was over the past year. I think it’s defensive and very different from what I otherwise have in the portfolio. Latest quarterly results showed no growth, but the company has also said their running at max capacity at factories and more capacity is coming online in the second half of this year. So in my mind this was expected, market seemed disappointed though. I’m very confident holding this extremely well run company as long as US regulators doesn’t come and crash the party. If the company is unable to show further growth, in US ZYN market, towards end of this year, then I might start to worry a bit.

One of my better investment that I sold way too early and now I have to pay the price to re-enter it at substantially higher levels. This is one example of where I should have focused more on the long term thesis than the short term valuation of the company. The company has a unique position in creating high quality joint implants for the Chinese market. The reason why I found this stock in the first place and the reason I gained confidence to re-enter the stock is spelled Alexander Eliasson, who you can find on twitter and substack. He is extremely good at digging up investment ideas around the world, I wish I had 10 Alexanders and I would barely need to source my own ideas anymore. He has written a very good write-up of AK Medical which you find here: AK Medical – Winners keep winning.

What has brought down the stock over the past year has been worries about how China is changing the procurement of Pharmaceutical medicines and devices. The new model is centralizing procurement and is forcing significant price reductions. It’s similar like many European countries with welfare systems are doing, behind closed doors there is a negotiation with the Pharma companies where there is a take it or leave it approach. I think the difference in China has been how hard they have been on pushing pricing lower. Obviously the Chinese parties agenda here is to make healthcare more affordable and available to its citizens. The key bit of information that made me very bullish was something I had not understood in the past, as written in Alexander’s post:

And since the product ex-factory price originally is just one-tenth of the ultimate retail price (Hip implants product exfactory price: RMB$3,000 VS retail price RMB$10,000-$30,000), indicating large sum of dealer cost can be removed under this policy, ASP may not be affected but even able to go up.

I fully agree with this view and I turned very bullish on the company. I’m pretty excited how this will play out over the coming years. The other point of owning this company is the long term thesis. Aging huge population and China and a local champion which is spending on R&D to come up with the latest technology for hip and other body implants. This is having such long strong tailwinds that by thesis investing, this is something you want to hold on long term in your portfolio. If my thesis doesn’t break I will just be adding to this company going forward (if it every gets a bit cheaper).

This is a complicated company, I spent so much time researching this one and I have an almost finished write-up as a draft. I decided I will release the draft for you readers benefit, although the end conclusion for me was to sell. It doesn’t mean I will never own it again, it’s a pretty incredible company, just not the margin of safety I need to own it. The draft will come out within the next week or so.

This was speculative and a portfolio hedge. Gold has traded pretty weak and company had neither really delivered, decided to exit. Timing wise I was extremely unlucky as the company got a bid on their assets right after my sell and traded up +30% in a short time.

After communicating with management I gained further conviction in this company and I made it a high conviction position. It is almost the last one of my growth companies that has not moved valuation wise at all. I think after the annual report the stock will start to move upwards. I will dedicate a separate post to Essex before the annual report is released.

I added a little bit to this one as I exited my Vigo position, nothing has really changed since my analysis: Synektik 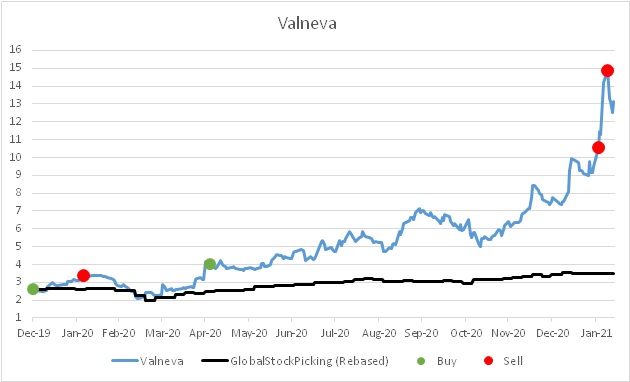 Last but definitely not least comes the stock which was a Lyme vaccine play but morphed into a Covid play. I would not say it was pure luck and I was totally unknowing that this stock could take off on Covid vaccine production. I was aware that the company had a platform to produce such a vaccine. But I saw it as long shot since they were so late in the race. Being based in Europe/UK this time really mattered and my long shot hit the bulls eye as they secured funding from UK for production of their vaccine. The stock has gone on a meteoric rise and valuations based on long term sales of Lyme and their other existing products can’t justify this valuation. Basically the company would need to make some serious money out of their Covid vaccines (which are not even confirmed to be effective yet). I wasn’t comfortable speculating to this degree on a latecomer to the Covid vaccine race. I would much rather then own Biontech long term. I’m extremely grateful to have hit one of these stocks that takes off like a rocket, I’m also proud that I dared to ride the momentum as far as I did. I wanted to sell this stock badly from first time it hit 10-11 EUR but I only sold 30% around this level a month later. This takes me back to the Blank Sheet of Paper investing, I could never buy into this stock at current levels. For me I’m comfortable owning this stock up towards 6-7 EUR based on their Lyme project with Pfizer. The Covid money received obviously raises this valuation so perhaps I would be comfortable to add this to my portfolio again around 8-9 EUR per share, but it wouldn’t feel like a bargain at those levels. In the end it did a lot for my portfolios performance to hold this all the way to 15 EUR, I netted about 16k USD profit in about a years time, that added some 7% to my overall portfolio performance. Only the future will tell if this would have been better in the Coffee Can or if I managed to sell out close to a multi-year top for the stock. Either way I’m happy with the returns I got.

10 thoughts on “Portfolio changes over the past months”