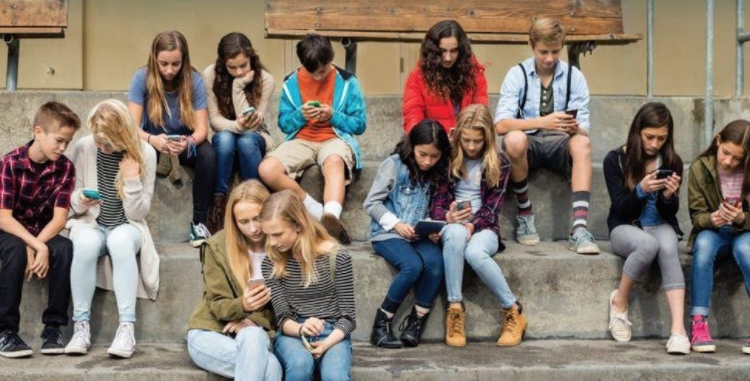 A time bomb is currently ticking in most of our bodies, maybe you are aware of it. But very few of us do anything about it, especially for our kids. This post is the backdrop to a series of post which will involve investment ideas related to this theme. But even if you are not interested at all to listen to my investment ideas, you should probably read this post just for your own well being.

Since modern computer technology entered our lives a lot has changed in terms of how we use our bodies. We can see the effects of this in increased cases of back pain, carpal tunnel pain in the hand and much more. But something has happened in the past 10 years which is currently having much more drastic effects on our bodies. I’m talking about how smartphones quickly entered our lives and become the number one tool we spend our time on. This series of posts will explore how heavy smartphone usage damages our bodies, particularly young people, what this means for the future and what companies are positioned to leverage this rather bleak outlook.

How much do we use our phones?

Let’s start with setting the backdrop. We all know that we spend a lot of time on our phones but how much? The below pictures puts this into perspective. 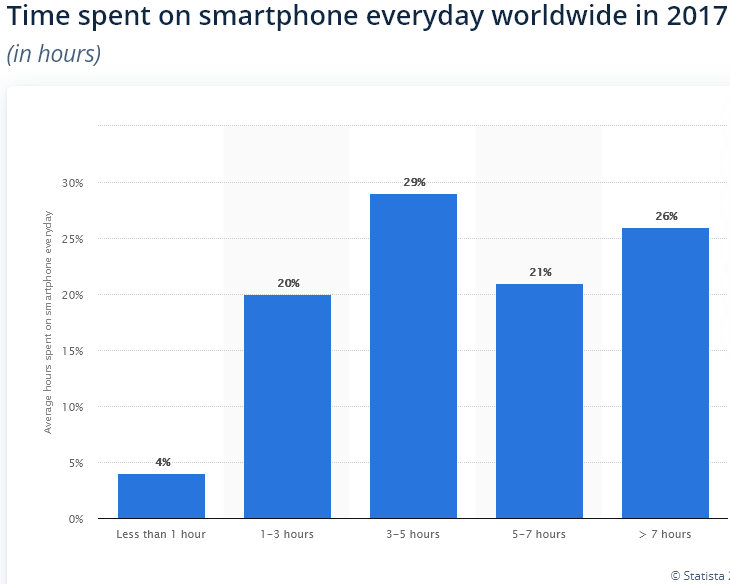 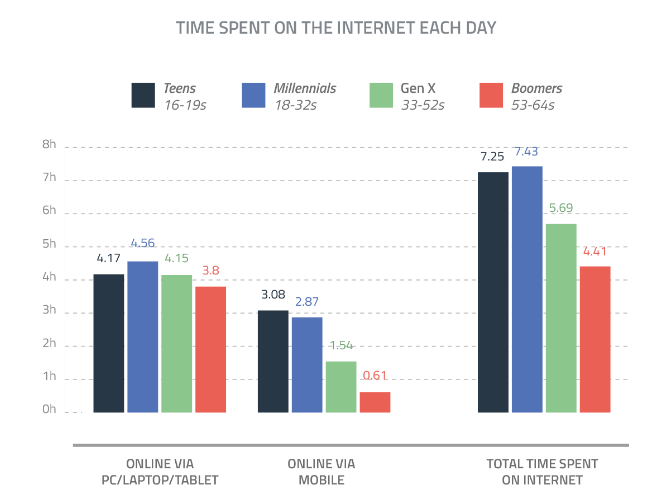 As we can see there is first of all a large group (47%) which are very heavy smartphone users (more than 5 hours per day). And the second picture gives some insight into that this is mainly concentrated for the people below 30 years of age. Keep in mind that this is 2017 data, since then smartphone usage has worldwide become even more widespread and latest data suggests average time spent has increased even further.

How is the body damaged?

Both these two areas are turning into such a widespread issues that its very concerning that we do not hear more about it. Especially myopia is already a global epidemic among kids. In 2010, an estimated 1.9 billion people (27% of the world’s population) were myopic, and 70 million of them (2.8%) had high myopia. These numbers are projected to rise to 52% and 10%, respectively, by 2050. This is especially an issue in East Asian countries, where the condition affects 80% to 90% of high school graduates. Of these individuals, 10% to 20% have sight-threatening pathologic myopia.

Neck damages has so far not seen such alarming figures but in my view this is a ticking time bomb to be unleash over the coming 10-20 years. There are of course very strong powers in the world with vested interest to keep our bent necks staring down at our phones as many hours as possible. More and more addicting apps are created each day to keep us entertained through our small screens, TikTok being the latest example among young people.

How we stress our necks

An academic study presented results on how much stress we put on our neck depending on the angle we are looking down at (see below picture). This is at the core of the problem, many smartphone users stay in the 30-45-60 degree angle for very long periods of time. Day after day the effects of such extreme pressures on the neck will compound and create damage. Since looking down at the smartphone is such a new habit, we of course do not fully understand the long term effects of this habit. I tried with the latest academic research combined with talking to spine surgeons paint a picture of what is going on in the world. 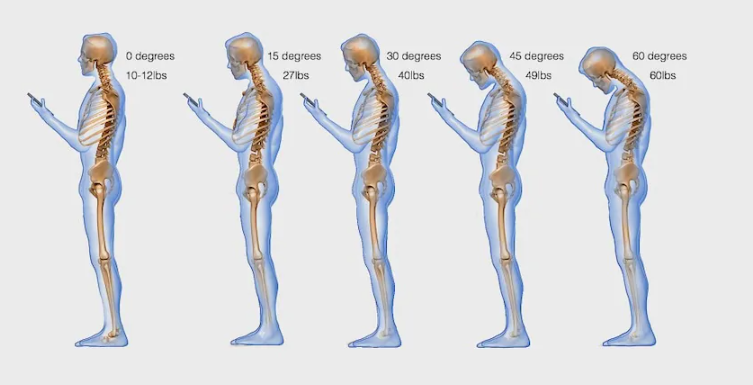 Nerve pain is the end-game

My understanding of this topic is a combination of talking to chiropractors, spine surgeons and academic research. I’m not a medical professional myself so some parts of this might not be explained properly.

When our head tilts down, our muscles in our upper back, connecting to the neck will do their best to pull back on that forward bent head. The muscles will over time get very tired and tight. A spasmed upper back with general stiffness and muscle pain are going to be common early onsets of heavy smartphone usage. Probably something most of you readers have yourself experienced at least once or twice. This type of pain is still manageable and not anything that needs more than a bit of rest, a warm pillow on your neck and perhaps some massage. Long term what is much more damaging (and irreversible) is the damage we do the cervical spine in our back. With age everyone’s cervical spine will degenerate, the key component being the soft nucleus disc which sits between each bone segment. These discs will naturally over time decrease in height, from classical wear and tear. But obviously how much wear and tear we experience depends on our habits. Looking down at a smartphone for 5 hours per day, year in and year out is not doing wonders to the discs. 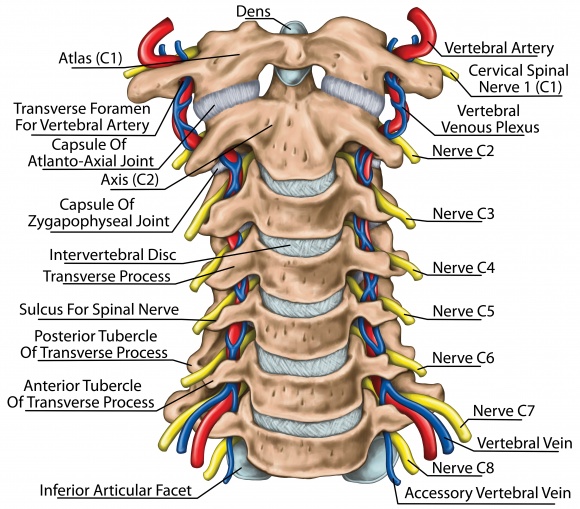 The symptoms from damaging the cervical spine will at early onsets still be mostly muscular, with similar muscle spasm and cramps that just occurs more frequently than before. The body is so to say warning us. The next stage of damage is when one starts to experience nerve pain. This can be caused from a multitude of issues, the below pictures try to depict some of the reasons for nerve pain. The nucleus of the disc can become compromised and start to either push on the main spinal cord or one of the spinal nerves going out to one of the arms. Bone spurs will normally also start to build up with age and poor posture. These spurs can also over time pinch the nerve. Nerve pain is a state which is much more acute and if not resolved the person will be on heavy medication to reduce the experienced pain and inflammation on the nerve. The very depressing news with the state of bone spurs or intervertebral disc height is that best case is status quo. A disc will never grow thicker and healthier again, a bone spur will never go away. We can compensate by building our muscles stronger around the area, but it will only help to a point. A so called slipped or bulging disc where the nucleus has been compromised can also heal. The body recognizes that the liquid has leaked out to where it should not be and in most cases a slipped or bulging disc heals with time. But with poor posture the risk of later in life have a bulging or slipped disc increases and even if many heal, some do not. 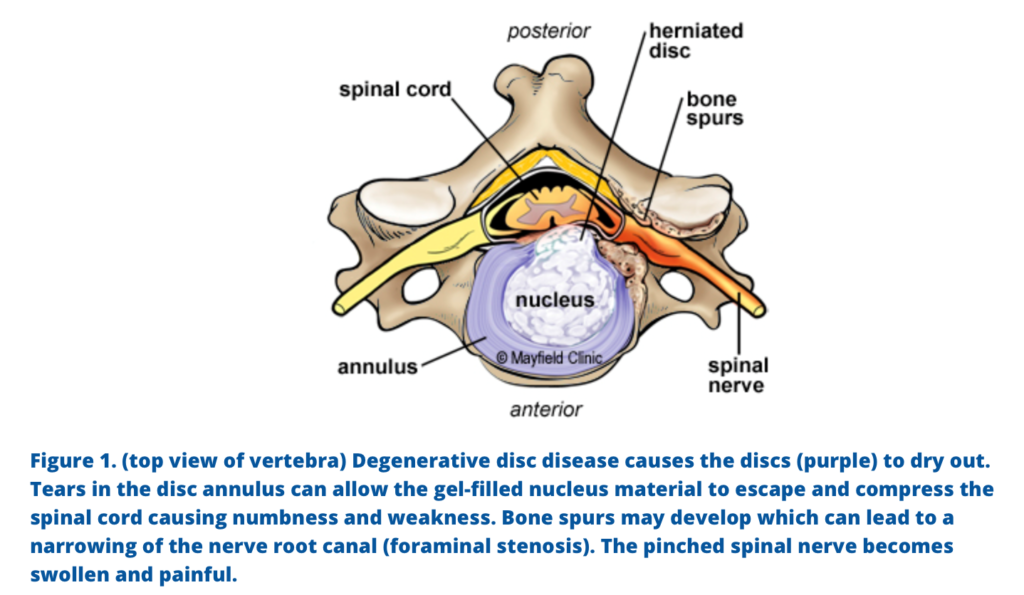 To summarize, this intricate system of muscle, bones and nerves degenerate over time, just as everything else in our body. What studies now are showing is that with our extremely poor posture, created by a new habit – our smartphones, we accelerate this degeneration drastically. Nerve pain which one would expect in people who are 60-70 years old are starting to be more common among much younger people. We are only 10 years into using smartphones, most of us have not been heavy users for that long. What will happen in the future when we have been using phones with a front tilted head for another 10 years? This is the ticking time bomb I started this post with. Why are not more people talking about this? In my view it is because it is still early days. But go and talk to a neck surgeon and he will tell you that he now sees patients that are 20-30 years old which have necks that degenerated to such a degree that one would think they are 60-70 years old.

What does academia say?

Almost all older studies are studying correlation between perceived neck pain/issues versus smartphone usage. The most interesting study is less than a year old, where scientist in China confirm versus MRI scans the state of the neck and link it to smartphone usage. Below are brief summaries of some of the studies I read: 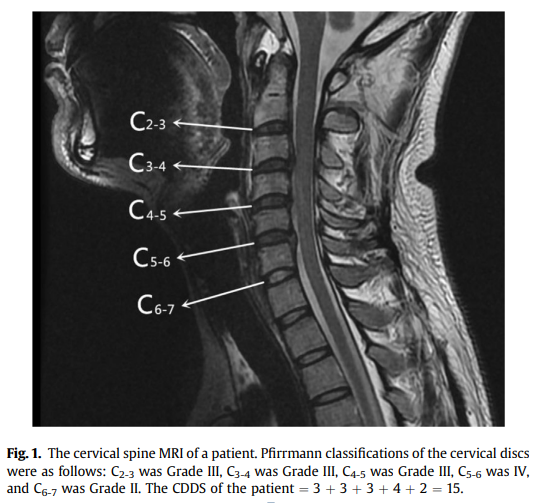 All patients in study had neck pain. The study invented a measure to scale how much “degeneration” was seen along the spine. This was as classified per disc segment from the MRI scans. The scale was called Cervical Discs Degeneration Scale (CDDS) from a scale of 5 to 25. CDDS of all patients was 15.80 ± 2.68 (range from 9 to 21). Another scale was then created to rank users in terms of smartphone usage: Smartphone Addiction Scale (SAS) 33-item self-rating scale. Score from 33 to 198. average SAS score was 76.67 ± 22.58 median 70. Above 70 were classified as excessive users and below as non-excessive.

Example of questions: My life would be empty without my smartphone, Feeling impatient and fretful when I am not holding my smartphone. 1= strongly disagree, 6= strongly agree.

There were clear associations between the highest category of text messaging and pain in the neck/upper back. In the group with symptoms, almost all individuals had the neck flexed forward and did not support their arms. This causes static muscular load in the neck and shoulders. Furthermore, they held the phone with one hand and used only one thumb, implying increased repetitive movements in hand and fingers. This distinguished them from the group without symptoms, in which it was more common to sit with a straight neck, to support the forearm, to hold the phone with two hands and to use both thumbs.

The findings of this review suggest that using smartphone may induce musculoskeletal symptoms in the neck. This systematic review revealed that the use of smartphones may contribute to the occurrence of clinical and subclinical musculoskeletal changes as well as associated factors in the head–neck, shoulder– arm, and hand–thumb areas.

This was a pretty bleak but I think important post. The good news is that medical neck surgery has moved forward tremendously in the past 20 years. The recovery rates after surgery are very good nowadays, it’s just a very costly procedure which unfortunately not everyone has access to.

This investment theme is something that I will keep with me for many years. My expectation is that this topic will just grow in importance for at least the coming 10 years. As I identified earlier investment themes, half of the job is understanding how the world is going to change, the other half is how to express that through investments and make money from it. It’s particularly cruel being correct on a theme (early) but losing out by betting on the wrong horses. In 2016 I was convinced that EVs would take over the car market (most people at the time were not convinced of this). I then wrote this post contemplating on how to best invest: Investments in EV value chain. It’s easy now to say that I should just have put all my money in Tesla, but I took a different approach which was quite successful but not of course nearly as good as betting on the “winning horse”. In coming post we will explore some ways to invest for a future with many more people requiring neck surgery.