2019 has been the toughest year for the GlobalStockPicking portfolio in terms of under-performing against the MSCI World benchmark, YTD the return stand at 3% vs 15% for MSCI World. I did very well up until about April this year, when I posted about a new all time high for the portfolio. Such boasting was immediately punished with severe under-performance. Both US and European markets have performed well, whereas Asia is more in line with my portfolio. With quite a lot of Asia exposure the portfolio has fallen behind, but even taken that into account I have under-performed.

Obviously I’m disappointed, but more so I have been scratching my head. Is this how it should look like at a market peak, as irrational investors pile into Beyond Meat like investments and rational investors fall behind? Or am I on the wrong track and investing in poor value trap companies etc? Before going further into that topic, below is the return in a more digestible format: 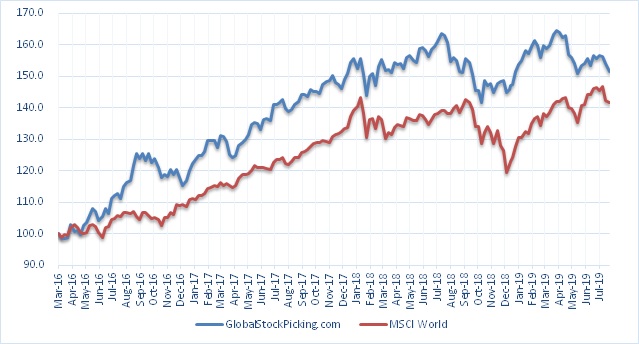 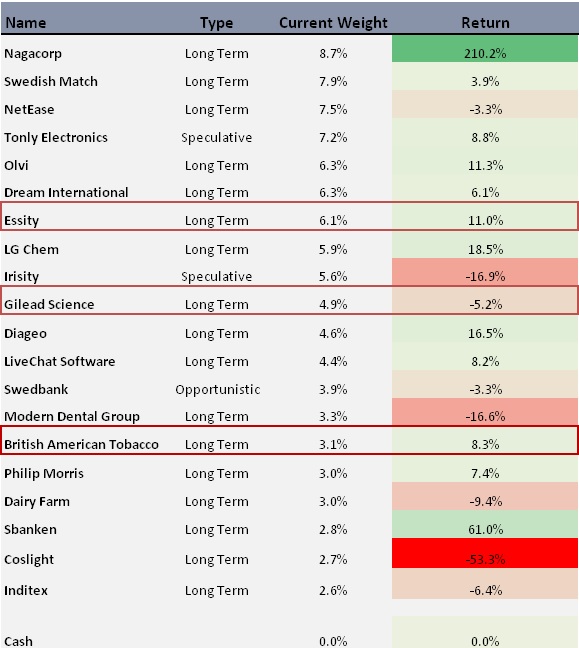 Basically this gives me a few large cap holdings which have not really been bought with these “edges” in mind: NetEase, Gilead Science and partly NagaCorp. But NagaCorp being a Cambodian investment, listed in Hong Kong and after a big run-up trades around 6bn USD in MCAP. I would say it’s not really a main stream large cap investment just yet.

Already back when I invested in Gilead I “confessed” that I had struggled to find a really great Pharma investment case. I relied heavily on other investors and their analysis when I invested in Gilead (Another Portfolio change Aug 2017). I think shows a bit how my investment style has changed since then. Today I would not do such an investment without doing my own due diligence a bit deeper first. Given the “no edge” argument, it’s time to let this one go and invest in something where I think I found an undervalued company, which the whole market is not aware of.

I might be right that ESG tilts in portfolios have put tobacco stocks on the no-go list of investments, but I can’t just base such a large portion of my portfolio just on this. I need to see that these companies long term are capable of delivering great returns in my portfolio. Swedish Match I think qualifies there, that’s why I increased my position there. Philip Morris might qualify long term, I do like the IQOS product and long term it’s success will be pretty crucial for delivering really strong shareholder returns. In BATS case, I’m pretty confident that this is a good defensive company which will deliver decent shareholder returns, if I was a corporate bond investor I would like BATS quite a lot. But I’m looking for slightly higher returns and I gambled a bit too much on this ESG angle having 3 tobacco companies in the portfolio, two is enough and BATS is the weakest link.

This switch is something I haven’t mentioned, but looked at for a long time now. Vinda being a Chinese tissue paper products producer, majority owned by Essity and listed in Hong Kong. Basically the case is that given demographics, Vinda will see much stronger growth than the rest of Essity, which is also confirmed in historical results. So all else equal given higher growth Vinda should trade at a higher multiple, but it’s rather trading just in line with Essity. Why? Probably because Vinda being somewhat illiquid in comparison with a small float of some 25% on 2.2bn USD MCAP. But you get a Swedish governance run company, with full exposure to China’s growing middle-class and elderly population. This is truly something to put in the long term bucket.

Some pictures showing how Essity and Vinda traded since Essity got listed as a separate entity (spun out from SCA): 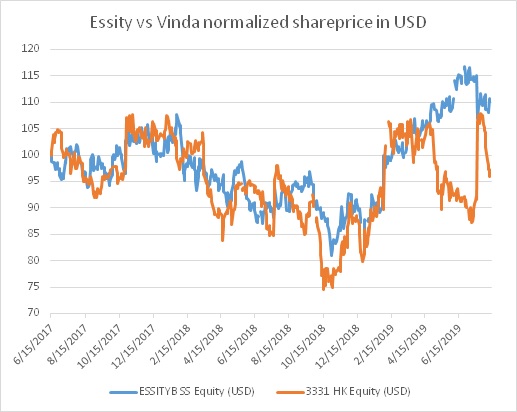 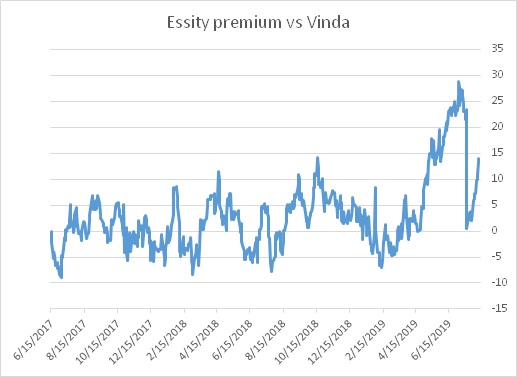 I was unfortunately asleep at the wheel during the summer when the spread was at it’s largest. The spread shrunk after great H1 results from Vinda, but has increased again on back of Hong Kong stocks under-performing in general (probably due to protests etc). So this gave me another opportunity to switch into Vinda.

Another twitter inspired holding (LiveChat being the other), which I feel a bit ashamed of not having found myself (given how much time I spend looking for stocks on the HK exchange). Again my timing here is not the best given that the stock has rallied quite a lot recently. A full write-up will have to wait, but this is the holding I hinted at in my 3-D printing post. The company produces orthopedic implants, mainly for the hip and knees. The sell their products almost exclusively in China. Over the last few years the spent quite a lot of resources to use 3D-printing technology to create better custom made hip implants. Just as I wrote about in the 3D-printing post, the most successful examples of 3D-printing so far has been for the human body, where the need for customization is high. The companies sales of 3D-printed implant parts is still fairly small compared to total revenue, but it’s growing very nicely. It also shows the companies ambition to not just be the low cost option for implants compared to international players.

I think the company partly have traded so strong lately due to trade war speculation. If the trade war intensifies, probably international companies selling hip implants will face difficulties, which could favor a local player like AK Medical. My investment thesis is not based on this though, although of course it’s nice to have a trade war hedge in the portfolio.

This company is not trading at very cheap levels, so I will start with a fairly small position. You will have to wait a while longer for a full write-up.

Sizing and adding in Sbanken

I sell the full holdings in Gilead Science, BATS and Essity as of close Friday. This takes my cash level to about 14.1%. Of this I allocate a 5% to Vinda and a 3% position to AK Medical Holdings. Of the cash left I decided to increase my position in Sbanken again, which has traded down significantly on general Nordic bank stock weakness. I take my Sbanken position back to 5% of the portfolio, leaving a small cash buffer.