After a very tough October, my portfolio has recovered somewhat and is in total down -1.6% on the year. That compares to MSCI World which is down -4.4% on the year. Both have achieved these returns, with the exact same volatility, 15.1% for the year (calculated on weekly returns). My correlation is 79.5% to MSCI World, which is rather high, but also somewhat expected. When markets fall correlation tends to increase between all equities (the correlation during 2017 was 64%). After being down to 0% cash, when I introduced my new three bucket investment approach, I’m now back above 10% cash after divestments in my funeral related companies and Amer Sports, which I will comment further on below. 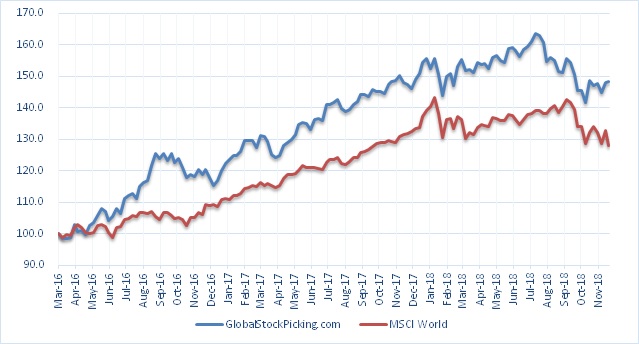 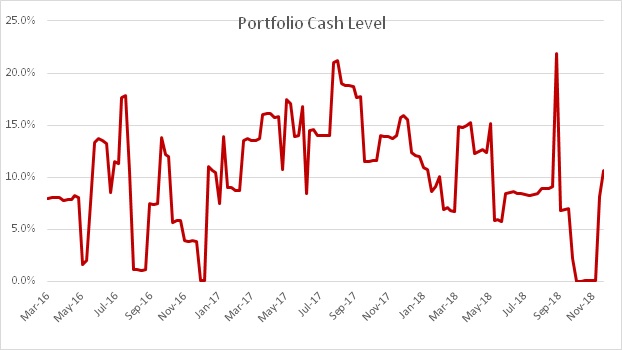 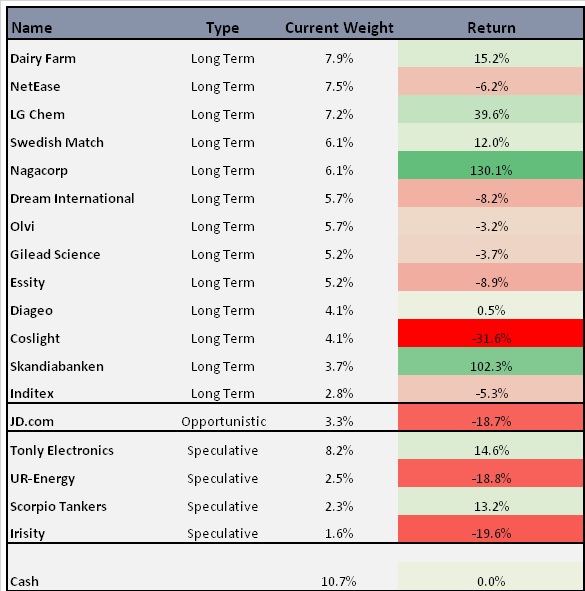 Amer Sports – The Chinese are buying

When I launched my big portfolio change: GlobalStockPicking 2.0 – Major Portfolio Changes, it just happened that information came out about a non-binding interest from HK listed Anta to make a bid for Finish listed Amer Sports at 40 EUR per share. Having looked into Anta when I invested in XTEP, the other sport shoe producer I thought this really made sense. Mainly because Winter Olympics in China is coming up. So I used my new Opportunistic investment bucket to take a 4% position in Amer Sports at 34.1 EUR per share.

I wrote at the time: “My own expectation is that this should be priced at 85%*40 + 15%*29 = 38.35 EUR”. I think the market has caught up with my analysis now, given that the stock closed at 38.37 on Friday. I still think this will go through, but there are some small tail risks, that for example USA will block the deal. Usually these things also take quite a long time, needing Chinese approvals. So I’m happy to leave the last 1.5 euro on the table and close my position here. This netted my a 10% gain in USD (some currency headwinds) in a market which was down -9% for the period, very happy with that. As always when an investment goes well, you just wished your bet was a bit larger.

This is the second time I got a more short term bet right, where there was Chinese related corporate action around a Nordic company. The first time was the Rezidor/Radisson case (Adding Rezidor Hotel Group – HNA related idea) which also ended with a buyout from another Chinese company.

Swedish Match – Adding 30% to my holding

The producer of Snus and moist snuff which through countless of studies have proven to be much less destructive to your health than smoking. The stock has been on a wild ride lately, first the markets have been very positive on the possibilities for growth of Zyn in USA. Lately the focus seems to be elsewhere, for example that Swedish Match will not be allowed to sell it’s products in the rest of Europe. I think they have a terrific product as good as all the e-cigarette alternatives. The company is very well run and highly cash-generative. This is one of those companies I plan to hold forever, now was a good opportunity to add to my holding. I add about 30% to my holding as of close Friday, bringing this holding to 6.1% of my portfolio.

Defensive feels good in these times

For the frequent reader, you know that I have been skeptical of markets for quite some time. I have expressed this in many ways, but the main theme has been finding defensive long term holdings. Early on in the sell-off my defensive approach did not really work out, because the only thing that held up MSCI World, was the U.S. market and tech stocks in particular. Being underweight both was therefore short term not good for relative returns. Lately it started to work better though when tech “finally” stopped defying gravity. Defensive feels very good right now, but that doesn’t mean I want to miss out on the stocks with higher return potential, or very undervalued cases. I will hold true to my defensive style as long as the valuation difference to growth/value doesn’t become too large. Now I’m actually more excited about stock picking than I have been for quite some time. Today I find much more interesting investment cases than I did a year ago, one example of that being Tonly Electronics – Another Hong Kong value investing case. There are many more I have on my Watchlist and even some not yet mentioned there. The point of my dental series has been an attempt to find 1-2 companies to invest in, which are defensive health care companies I can understand. To summarize my defensive holdings:

What I see as defensive holdings:

Olvi (5.7%) – Finland/Baltic – Produces beer and other alcoholic and soft-drinks, selling mainly in Finland and the Baltic countries.

Diageo (4.1%) – Global – One of the worlds largest distillers with brands like: Johnnie Walker, Smirnoff, Gordon’s Gin, Captain Morgan and numerous others. Also Guinness is a large portion of revenue as well as its 34% stake in Moet Hennessy drinks division of LVMH.

Total = 53.8% of my portfolio is held in defensive companies or cash.

The above companies are a mix of daily needs, like food, clothes and hygiene and vices, like alcohol and gambling. All of the above holdings I’m confident to hold long-term, especially in a bear market. That doesn’t mean though that none of them will ever leave the portfolio. I try to think long term and get to know my companies well, something I didn’t appreciate enough in the past. Part of being long term is to not rush into the new investments, I will take my time and get to know new companies properly before investing. But if I find a new investment that feels much stronger than what I currently hold, the old will go out.

Lately I spent a lot of time trying the understand the Chinese tech scene better. There are a couple excellent podcasters out there who educate anyone willing to listen, on everything related to China tech. One thing that is very clear, is how extremely hot this sector is and how fierce the competition is. It seems to be on a totally other level than outside China. On top of that we have the Chinese government interfering in a lot of different niches. The competition and the intervention has again made me more negative in general. So the three of my holdings I’m currently thinking most about all have strong China and tech ties:

NetEase – Great company, with quality games and co-ops with western gaming companies. Given how much U.S. listed Chinese companies have been punished lately I think investors still really like this company, trading at a trailing P/E of 37 and estimated P/E of 24, is not dirt cheap. Obviously partly this is due to the halt in new game launches in China and everyone is expecting this to be temporary. Still, the government is showing who is boss and they won’t allow especially young people to be gaming addicts. Just as the funeral case, this hampers the upside for NetEase. Although I would argue that it probably very long term is healthy for the company to have more balanced customers and not school drop-out gaming addicts. The other aspect is the competition, which seems to be brutal. In Sweden a number of listed gaming companies have plummeted lately, it’s not that easy to keep delivering one of the few hit games everyone is playing. I have a hard time deciding of this a long term keeper or not, maybe the competition will eat up NetEase future? My Original Post on NetEase: NetEase – Chinese Gaming

JD.com – Here we have a company that is again fighting in fierce competition in the e-commerce space. The moat though and reasons for investing in this company is the fantastic delivery/logistics network they have built up. This is the hidden value in the company and the reason I invested. Some nasty details has been coming out about what the CEO has done in rape allegation case. It doesn’t feel very good to be shareholder alongside someone accused for something like this, but the company as such, I think is valued very low currently. If we disregard from personal feeling around the allegations (which is hard to do), this is in my mind a value investment at these levels.

Coslight – I haven’t written much about this company for a long time, it has been a big disappoint lately. This was an early investment for me on the theme of EVs and back-up power stations. The company has developed poorly due to needs for large investments which has been impossible with the already high debt levels (a misjudgment on my side). The solution became to sell of parts of the factory producing batteries for laptops. I think that was the best they could do out of a bad situation, but I’m not sure if they will be able to succeed to play with the big boys like Panasonic, LG, Samsung and CATL. Already back in 2016 it was clear to me I needed to wait until 2020, before EVs would start to sell in larger scale, now we are almost there. This should perhaps move into the Speculative bucket, but I held it for a long time and I will let this Electric Vehicle hype actually play out before I decide further on Coslight. The same reasoning goes for LG Chem, but there I don’t have doubt about their success, they are and will continue to be one of the market leaders. My original post of Coslight: Coslight Outstanding results