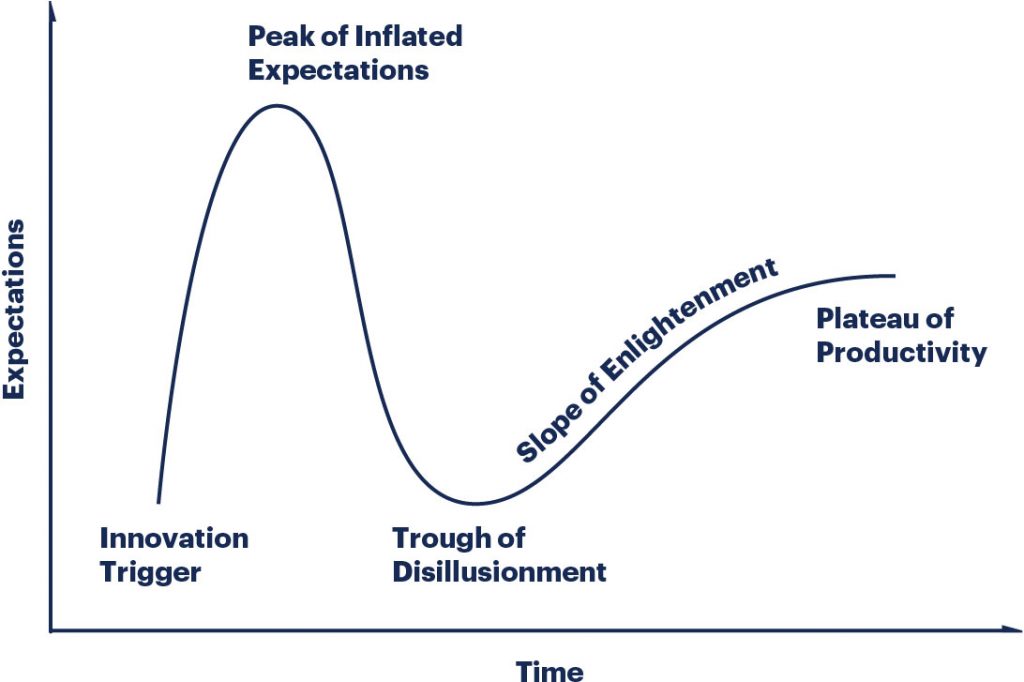 The Gartner hype cycle in the picture above can be used in many situations in life. For example I would draw a very similar curve of my perceived knowledge of equity investing. Starting at a low level back in 2002-2003 as a total beginner. Quickly I reached a peak of disillusion around 2007, when all my investments had done great for 4 straight years. I was master of investing and yearly returns of +30% seemed likely. Like another famous expression, do not mistake a bull market for actual investing skills. In early 2009, all my illusions had been shattered and quite a lot of my bank roll as well. From there onward I have been a more humble investor, knowing how little I actually know about investing. Humbly crawling up thew slope of enlightenment is a fun exercise and what this blog is about. Maybe you have gone through a similar cycle?

But enough about our investment psyches, let’s talk 3D-printing.

3D printing and the hype cycle

As probably most of you are aware, we had a big hype in 3D printing a number of years ago, where do you think we are now on the above Gartner curve?

Let’s look at the share-price performance of two of the largest pure-play 3D printing companies. 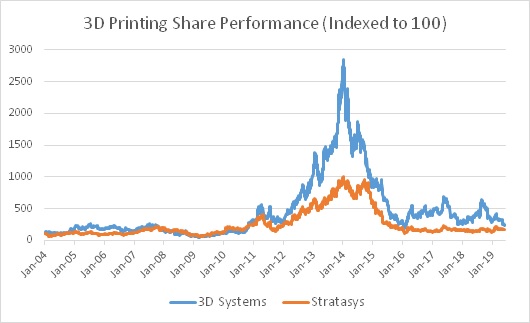 It looks like a long term shareholder got a very wild ride above, but most likely no returns so far. And its clearly a boom-and-bust hype cycle we have seen in 3D-printing. But as with every hype, there is usually quite a lot true business opportunities hidden behind all the hype. There are numerous examples of investments that after a hype has died become very profitable. Probably the most famous examples are all after the IT-bubble burst, picking up the survivors like Amazon would have been a good decision. A less famous example would be the extreme hype we had around Clean-tech up until 2008. Since it coincided with the Lehman collapse it’s perhaps slightly less obvious. But winners did emerge here also, like Vestas Wind, which bottomed in 2013 and has from that bottom reached back to around pre crisis all time highs, giving bottom fishers a return of about 17X their money.

To believe that there is something real underlying in a hype, one has to read up on the use cases of 3D printing. And I have to say, the more I read, the more I realize this is actually all around us already and it’s not going to get smaller.

Obviously there is no telling where we are in the cycle, but I would put 3D printing right now somewhere at the earlier part of “slope of enlightenment”. But then thinking about it in more detail, is it really relevant to put everything under one 3D printing label? Probably not, Gartner actually splits up the universe of 3D-printing and maps out all sub-segments onto the curve: 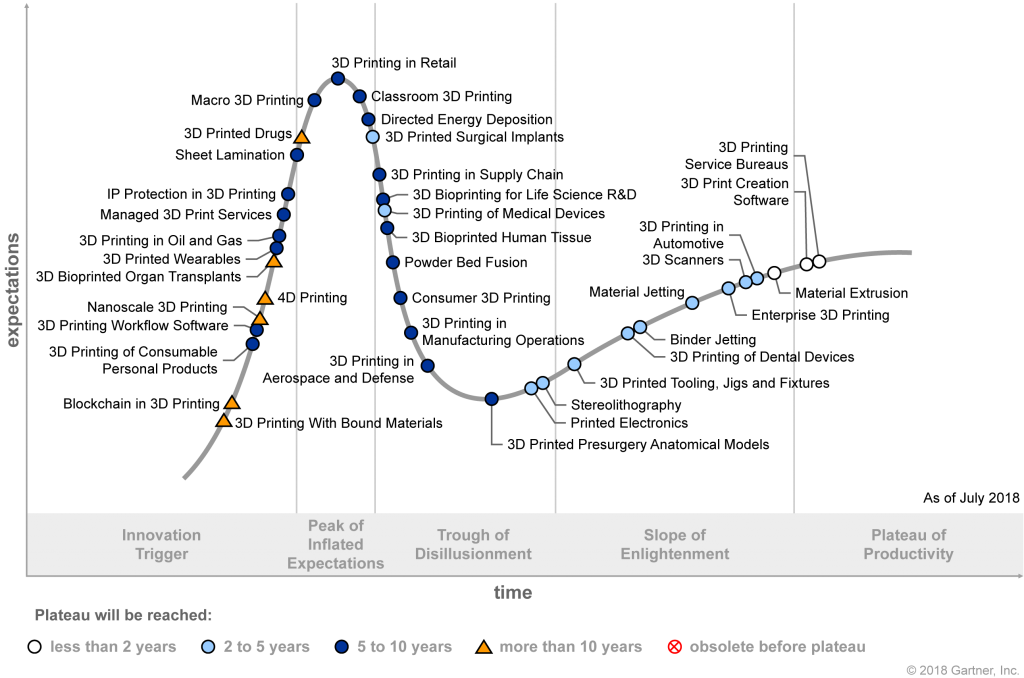 As you can see the graph above is almost 1 year old. So if Gartner is spot-on on all these observations, everything should now be shifted 1 year ahead on the curve. I find the light blue dots especially interesting, since that indicates technology being some 2-5 years from reaching a mature stage. Some of my first question seeing the above graph was, how big is this industry? And are there any examples of a mature 3D printing business? Let’s look at those two questions:

For this I’m referring very much to this article: Worldwide Spending on 3D Printing Will Reach $13.8 Billion in 2019 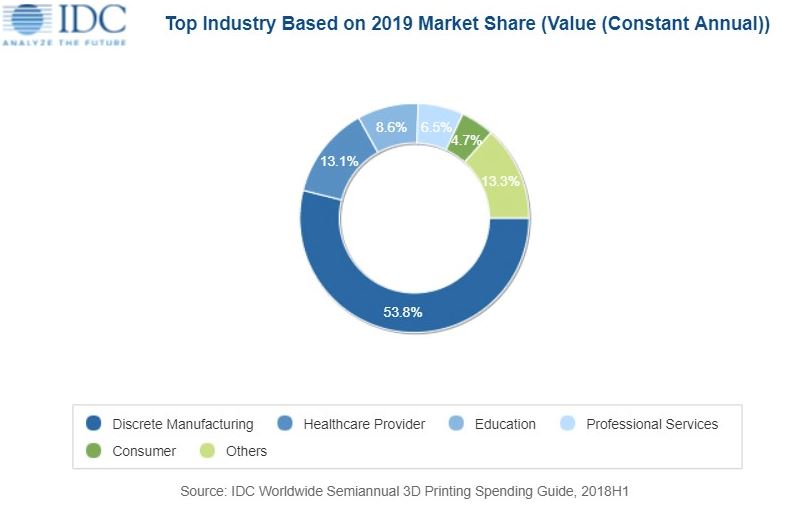 The first and most cited example where 3D printing has taken over the industry completely is hearing aids. According to this article, already in 2017 hearing aids produced in the western world where all literally 3D printed: Phonak 3d printed hearing aid. I find that fascinating, that one large hearing aid player (Sonova) moved to 3D print and within years the whole industry moved to it. 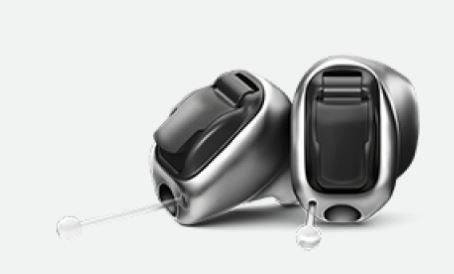 The next example is a tangent to my previous posts about the dental industry. The dental industry has multiple examples of 3D printing or “milling” machines that create custom made products for the mouth. But I think the most telling example is Align Technology, who were able to revolutionize the experience of teeth correction, with it’s invisalign products. Sometimes a video says more than a thousand words:

The third area of 3D printing is not where the technology entirely taken over or redefined it’s product area, but rather high tech production, where 3D printing is a superior technology to save weight, create complex shapes, etc. Again a famous example are the 3D printed parts that started to go into airplanes: Boing Dreamliner with 3D printed parts

So the more I researched and thought about 3D printing, I found 3 broad categories of 3D-printing services/companies:

When talking the 3D printing hype, much of the focus has been on category number 3. But so far, almost all of the actual value creation has been in category 1-2. Align Technology being the shining star example. If you invested in ALGN at 3D Systems share price peak in Aug 2014, you would have returned 460% by now. With that knowledge, probably a good area to search for new investment cases would be in new such 3D printing disruptions and not the 3D printing machine makers themselves. On the other hand, if we are seeing a bottoming of these companies, maybe the also have decent upside from here on. I will be back with at least one investment case in this area in the not too far future. 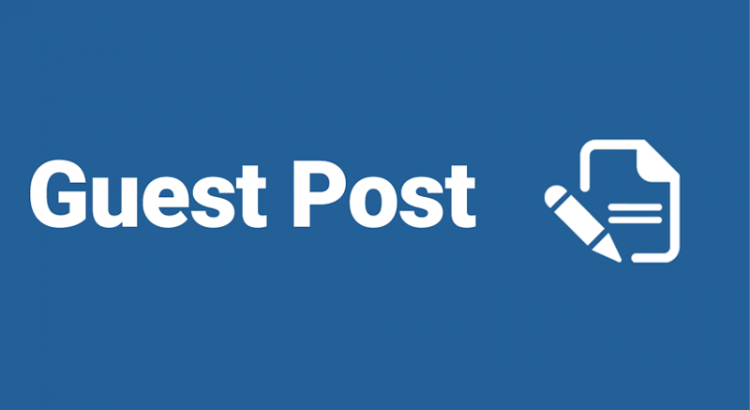