If you have been following my posts on portfolio changes you know that I have been running a fairly high cash position lately. I have been struggling to find new good investments. With a few days off during Chinese New Year I have tried to search for new investment cases. I wanted to find something in Europe or the US but again it is a China exposure.  I guess I keep coming back to this market because it’s here I still can find companies at reasonable valuations. American stocks for example just feel so expensive. Entering at a 5% weight in my portfolio – XTEP International Holdings a sportswear and mainly sports shoe maker listed in Hong Kong with almost all of it sales in mainland China. 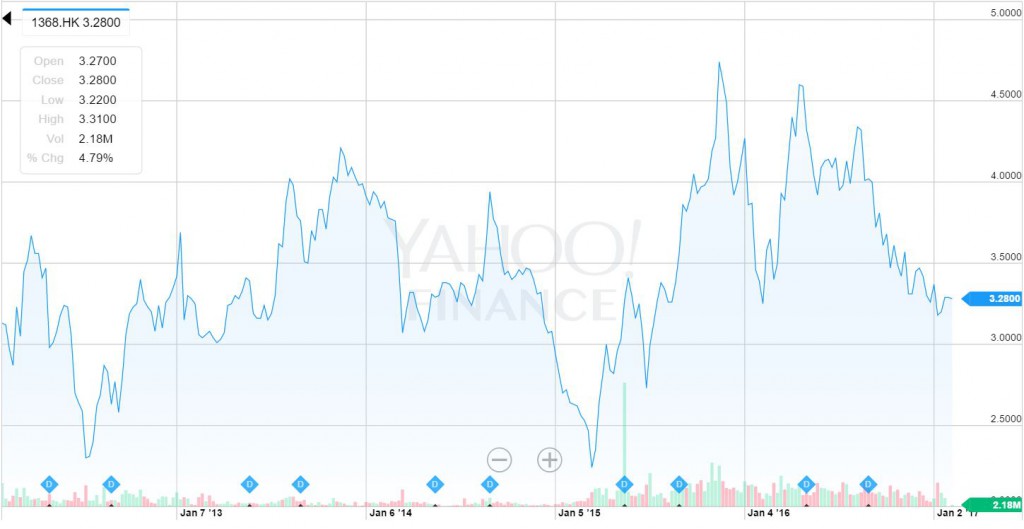 The company you can say is a copy-cat on the way Nike sell their products. A strong offering of running shoes and other type of sport shoes and then offering a whole set of other sporting apparel in the same shop. The company was listed in 2008 and share-price wise not much has happened since, although the company has delivered solid dividend over the years and increased revenue significantly in the early years. The company had a rough patch in 2013 and has now recovered closer to peak revenue levels.

+ Sportswear and the “healthy trend” has also reached China, projected to have continued good growth for many years.

+  Working with popular celebrity Nicholas Tse who promotes their brand (my girlfriend who is Chinese thought this was an important point).

+ Looks wise, shoes improved significantly over the last few years. Now selling a shoe that looks as good as Nike but sells and half the price.

+ Seem to be ahead of competition in terms of e-commerce sales through Tmall and other online channels (including their own homepage).

+ Competitors share price has been rallying lately, XTEP is the lagger, a positive in my view since I see it as unjustified. But perhaps also a worry, what does the market know that I don’t know?

– History of trading at low multiples and high dividend yield in the past. Value trap? At least receiving a nice dividend is good, but why is the market so hesitant to multiple expansion?

– Just a few years ago fierce competition among local players, leading to weakest hands being shaken out. XTEP being a semi-small player also struggled, somewhat worrisome. The largest rival Anta held up much better during those years.

– Hard to judge what brands the Chinese would prefer among the local brands, some sell side analyst argue Li Ning has a better product offering and better brand image.

– Lately sales have been dropping in apparel (more on that later). 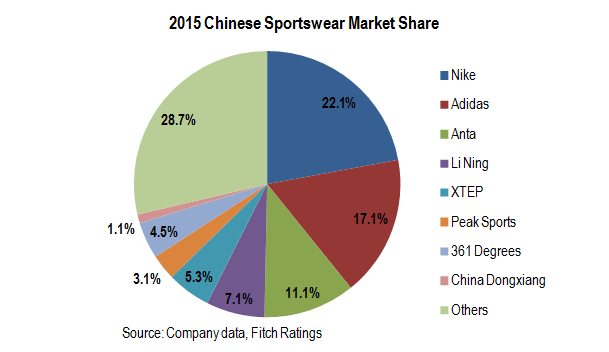 The market is lead by the international brands Nike and Adidas, likely one would expect more competition in the future from international players like New Balance, Asics etc. On the other hand there is probably room for consolidation of the “Others” piece of the pie, where probably Anta, Li Ning, XTEP, Peak Sports and 361 Degrees will be able to grow their market share.

So basically the local competition to XTEP is four other Chinese players, where Anta, Li Ning and 361 Degrees are all listed. Peak Sports was also listed but was recently acquired.

XTEP has been a clearly been lagging stock price wise and that’s the main reason why the stock look so cheap on metrics compared to the competition.

The main reason for the weak performance lately (as far as I have been able to gather) is explained by this graph (Sorry for the first graph being reversed, 2016 to the left): 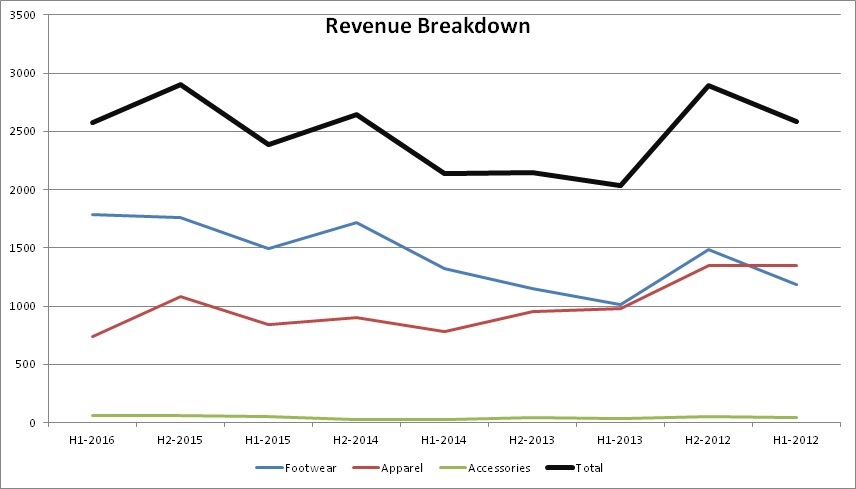 We can see the tough competition mentioned earlier, in 2013, where all players were witnessing pressure on sales. What has happened since is that apparel has not recovered, rather hovering sideways, whereas footwear sales has shown very nice sales growth. The last reported figures are a bit of a mystery and explains the share price weakness, apparel sales drops a lot, whereas if looking closely at the footwear data, H1 is normally weaker than H2, but the footwear sales comes in very strong. So what is happening with apparel? Well I don’t have a full answer, going in on their homepage I can see they are having heavy discounts on the clothes (80-85% discount on some items). The company has also stated a strategy on harder focus on footwear, becoming a leader in this field, expanding sales of soccer shoes etc.

Otherwise we can see that the business is operating profitably and generating cash (which is 50% paid out in dividend). 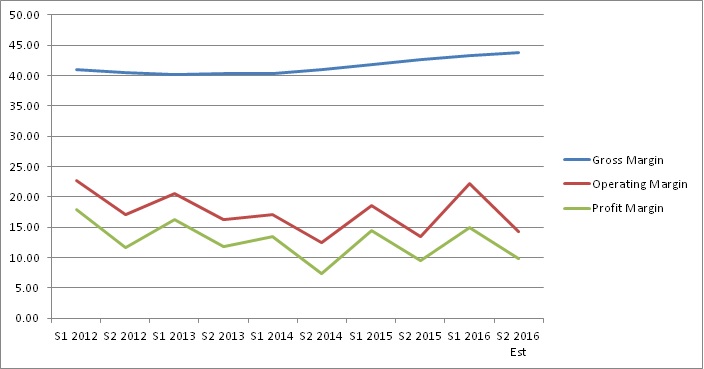 I’m willing to take a bet here that apparel will recover to its previous trend of revenues around 900m and the H2 figures for footwear should come in strong. Even if it sales comes in at current levels, the stock is trading cheap and there is much more room for upside surprise compared to downside, which the market seems to already have priced in. I don’t really see why XTEP should be trading at such a steep discount to its competition, being a small cap stock I’m betting that the market has miss-priced the stock rather than that they know something I have overlooked.

If anyone has further input (on the ground testing of products etc) please do comment. I plan to visit Shanghai this month and will follow this up with a small field trip of checking out sportswear stores.