Just when I thought I was out.. ..they pull me back in. Like the character Silvio in Sopranos says, I say about inflation and interest rates. Just when we were giving up and starting to believe the low rates would be here forever, Trump pulls us back in. Two weeks since my last update and it is already a new world out there. I won’t go over the obvious around Trump’s win, but its clear the market has decided to take his promises for fiscal spending seriously. What is happening in the US Gov yields further out on the curve is very interesting. Suddenly we live in a world, where people are anticipating some inflation pick-up a few years out. The US 10Y Gov yields quickly dropped to 1.75 during the election night, setting a low at 1.75% intra-day and then reversing and now trading around 2.26% – that is a massive move! 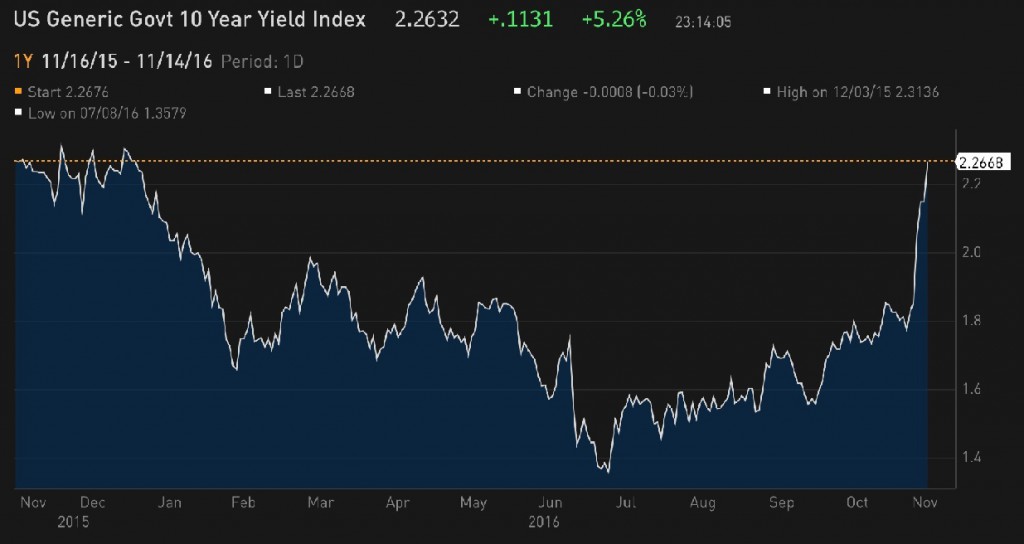 This is something we equity investors have to be wary about, it changes the investment landscape and should if it continues create massive sector rotations. For example all the high dividend strategies that sounds amazing with 4-5% dividend yields, sounds less fantastic when the US 10Y Gov is back at 4% and at the same time those companies need to lower their dividends, because they are highly leveraged and their cost of funds just when through the roof. Everyone should go through their portfolios and look at if their companies have high debt levels as well as consider their business model in a higher interest rate environment, this could be the beginning of a bigger shift.

So the Rottneros report came out, it was disappointing yes, below what I had estimated, but the company is still cheap and its a small company, so earnings will not be as smooth. With the SEK weaker than ever and pulp prices holding steady I choose to add here and make it a conviction position, by increasing another 2%.

For the ones that follow the portfolio performance graph in the Portfolio page has seen that it has under-performed quite significantly the last couple of weeks. I had a few hits, among them Ramirent that came with a weak report, really weak, strangely weak. Not really sure what to do here, I’m looking for a better exit level. But in general most of my holdings have been weaker than the index, it’s just been a shitty two weeks for my portfolio. High beta? Yes a bit, but also caught on the wrong side of the Trump-stock-rally – overweight Hong Kong stocks has for example not been great. But I stick to my guns, I’m sure I will come out OK on the other side.