I have had a extra close eye on YY for a while now. The reason is that it had surpassed my conservative valuation in my analysis (YY Full analysis) of 56 USD. Actually I still wanted to squeeze out some more of the juice and believed we could see the stock trading up towards 70-80 USD. Especially considering how well other tech stocks are doing. But one of the concerns that I listed was a potential government crackdown on live-streaming. This is also something mainland Chinese people have warned me about when I have discussed the YY investment case. As an investor in China I have the fullest respect for what the government says and plans to do, in-fact many of my investment has China’s long term plans as a nice tailwind for the investment case.

On the 22 June a State administration announced it had requested to suspend several video portals due to lack of licenses. The largest company affected was Weibo and two others, this was not at all related to YY. Later on information came out that the number of services that had been named was larger than the initial 3. Today before opening the market realized this crackdown is more serious than initially expected. I haven’t myself managed to get to the bottom of this, just reading news articles like these ones:

Chinese authorities put the brakes on a surge in live streaming

Quite often these things just blow over, forgotten in 3 months and everything is back to normal. But sometimes it’s the real deal and nothing will be the same again. Given that I reached my target price and YY has not traded down drastically on this, I take it as an opportunity to both further reduce my China exposure and sell my holding close to my base-case target price, and a very healthy profit. 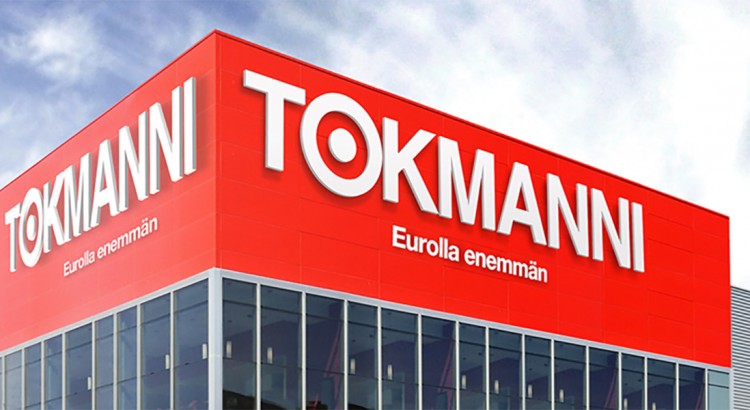 Tokmanni – another bricks and mortar investment

Tokmanni which today is something of a “Wallmart light”, started in 1989 and changed the name to Tokmanni in 1991. The first stores were established in Eastern Finland. In the 2000s it was decided to expand nationwide, and Tokmanni made significant acquisitions in 2004-2007. The larger acquisitions were Vapaa Valinta, Tajousmaxi, Robinhood and Säästöpörssi, in total about 90 stores were acquired from these four and over 100 stores in total was acquired. In 2008, a new administration and logistics center in Mäntsälä was started, including nationwide distribution of products. This was to oversee the previously decentralized activities. In 2012 PE investor Nordic Capital acquired 88.5% of the shares and Mr Seppo Saastamoinen acquired 11.5%. 2012 was also the year TokNet e-commerce opened. After this a brand harmonization followed, and as of 2016 all the stores and the online shop are known as Tokmanni.

As of Dec 2015, the split of product types sold is the following:

+ Tokmanni has successfully consolidated smaller players under it’s brand name. Economies of scale together with increased direct sourcing from Asia has the potential to support further margin expansion.

+ The Finnish market seems to be look more favorably at discount stores (although the stock market is very negative to bricks and mortars). The company is taking market share (still opening new stores) in what has been a tough market (defaults and low profitability among competitors).

+ Anttila department store bankruptcy in 2016 created short term weakness (store clearance), but should mean long term opportunities (Tokmanni is taking over Anttila empty store space). The store openings will also short term lower profit margins, but is of-course a long term positive. The store indicated to be added in 2017 is 26 000 m^2, which is roughly an increase of 6% of total floor space, much higher than previously, if this is executed successfully, it should give 5-6% revenue growth in 2018. I value this growth opportunity at 30 cents per share in 2018 and possibly more in the coming year.

– Recent Profit warning for 2017 (Link), revising down guidance. Is this the beginning of a longer term trend? They blame weather (which I hate when companies do, although I can agree that snow in June in Finland is extraordinary). Listening to their latest full conference call after Q1 it sounded like it was not all weather related, but rather that they had not supplied stores efficiently.

– The Like-for-like store sales has not been that impressive (but the market has been weak). Tokmanni’s own data paints this picture:

– CEO was supposed to leave in September 2017, after 8 years at the company. A few days ago he announced that he is leaving early. Not sure how much to read into this, normally it wouldn’t be strange for a CEO to leave after 8 years, but if one wants to speculate, the way he left leaves some question marks. Obviously there is also uncertainty around the new CEO they are now looking for. The company was floated by Nordic Capital and they have now divested the majority ownership in the company, the lack of a new strong majority owner also gives some reason for concern in this regard.

– Its sales channels does not sound that modern, one would have hoped some more modern technology, like apps. But they rather have been spending their sales budget on this old style leaflets sent by ordinary mail, with the “weekly discounts”. Probably works well with the older generation, but not really for people below 40. The homepage they have is OK though and maybe their newly hired Business Dev Director Hanna Nikoskelainen can change that.

– The share price is not even in a negative trend, but rather in a free fall currently. Who knows when this turns around, one could get hurt (short-term) trying to catch the falling knife. This is off less concern for me though, although I prefer to buy stocks with good long-term momentum.

As can be seen below sales (and profits) are highly seasonable, we have just now passed the weak first half year. The company has been growing at ~3% yearly rate (store openings rather than stores selling more), but the latest quarter was a disappointment and now they are warning that Q2 will also be disappointing. 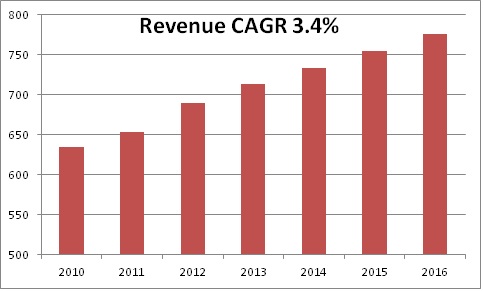 The valuation model is highly sensitive to both margins as well as the cost of capital. I believe research firms that get very high DCF values are using a fairly low Cost of capital when discounting the cash-flows. I’m more conservative here with a WACC of 7%. I like that the bear case shows so low downside risk (about -15%), given that we are already in a weak market in Finland and if anything, signals are for improvement.

Maintain 3% revenue growth rate over the coming  5 years, thereafter lowered to 2.5% per year.

I would not say that this is my strongest buy case ever, but I like being contrarian and do believe you have to be contrarian to generate alpha. Or if you are not contrarian, at least you have to identify the new trends before everyone else. I think this is a stable business, which is just experiencing a bit of a soft patch and turbulence currently, which will have passed before year end. Indicators in Finland are improving (Consumer Confidence) and the bankruptcy of Anttila is actually an extra boost in long term revenue growth for Tokmanni. I also like the very healthy dividend yield. All in all the probability of outcomes seems skewed to the upside, I put a medium-term target price of 9 EUR and will re-evaluate the case when/if it is reached. I initiate a 4% position.

The Norwegian sporting goods retailer has been hit by the same negative trends as all bricks and mortar stores worldwide and the stock has traded down significantly from its highs. I’m not sure if it’s wise to go against this trend of bricks and mortar shops all dying from online competition, but my thesis is this niche will be less hurt.

Today the first sell recommendation on XXL was released by Arctic Securities. Arctic is claiming there is a structural concern, partly by competition, but mostly from the named headwinds from Online competition. Long term I don’t agree that should be the case for XXL, I believe this company has something unique and will continue to grow and take market share long-term. Everyone you talk to likes shopping at XXL, for a number of reasons. They have good products, the staff working there is competent and at the same time they have pricing which is good enough, so you do not go home and order it online instead. So I see this as a short term miss-pricing, where the baby gets thrown out with the bathwater in this trend of everyone selling bricks and mortar.

Initiate with a 4% position

This is a growth stock, and I’m buying it on the belief that they will be successful to continue to grow, in particular Sweden and Denmark. As a more long term option is the Austrian and later German market, that will take time to materialize, but I do like that they have ambitious targets of growing. I’m willing to add to my position if no negative news come out and the stock trades down to the 70 NOK range.

Catching up to do – Analysis on the way

I have quite a lot of catching up to do in terms of deeper research. I will spend my time during the rest of the month to try and produce more in-depth analysis of some of my recently bought stocks, including this one..

When i finally took a position, I did so with some short term hesitance, given that I did not see any short term triggers. It will take time to scale up the revenue when Naga2 becomes fully operational. That means there is still time for potential share weakness when short term investors are shaken out. I think we have seen that over the last few months. And although the majority owner is not treating minority ownerd fully fairly, the crubles we get still goes a far away at these valuation levels. With a succcesful launch and almost doubling of revenue over the coming 2-3 years warrants a share price in the 6-7 HKD range depending on the margins they manage to achieve, as well as what the Camobidan government decides to do with its tax levels.

Im willing to double my holding at these levels, with further share weakness it could potentially become one of my high conviction holdings.

Although Nagacorp is HK listed and a part of its customers are Chinese, its not a pure-play Chinese company, given that it is located in Cambodia. Even so I feel obligated to keep reducing my China exposure. Which is not an easy task given that I see a lot of value (lower valuations) there than elsewhere. But as I written before this is a tactical portfolio decision, I just have to do my best to find interesting investment cases in other markets. Given this I say thank you and good bye to a holding that has become a real success investment, Shanghai Fosun Pharmaceutical. I bought the stock at 19 HKD in August and sell out now at 31.85 HKD, where a large part of the gains has been multiple expansion.

The long long term case for Chinese Pharma and stocks in the Hospital business particularly I think is still intact, I hope the future gives me another opportunity to buy this stock on the cheap.